KIKWIT, DR Congo, Apr 26 2012 (IPS) - Farmers in the Democratic Republic of Congo are embracing a new variety of cassava which, in combination with improved agricultural techniques, easily outperforms yields from other popular types of this important crop. 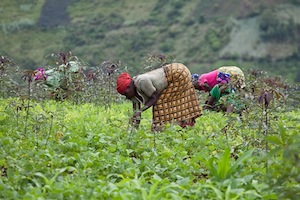 Farmers in the Democratic Republic of Congo are embracing a new variety of cassava. Credit: Credit: André Thiel/Flickr

Cassava is a staple food in many parts of DRC, and farmers disappointed with harvests of the popular F100 variety, which has proved vulnerable to a plant disease called mosaic, have turned to a newer strain with great success.

Twarita, the coordinator of Action Jeunes Pour le Développement de Nkara (AJDN), an association of 22 young farmers at Nkara, 90 kilometres from Kikwit, the capital of the southwestern DRC province of Bandundu, says the 2011 crop brought in more than 25,000 dollars for AJDN, against 10,000 dollars the year before, and just 3,000 dollars in 2009, the year the association was established.

He said AJDN has also adopted “binage”, a new method of hoeing which maximises the benefits of irrigation –”worth two waterings”, as Twarita put it. Binage calls for the surface of the soil to be broken up, to allow more rain to soak into it. The young farmers also use compost and manure to enrich the soil with organic and mineral matter.

“The big problem is a shortage of farm implements, and the lack of understanding from landowners who ask so much money for a plot – 40 or 50 dollars for half a hectare, depending on location,” he told IPS.

“The cassava is bought from farms here by traders, then sent to the capital, Kinshasa, where it sells fast,” said Jacques Mitini, president of the provincial network of small farmers’ organisations in Bandundu, which includes 255 smallholder associations, nearly a third of these representing young farmers between the ages of 21 and 33.

In the west of DRC, in Bas-Congo province, the Comité de Développement de Kakongo (CDK) is planting trees to create windbreaks and maintain soil moisture, boosting production of other crops on a three-hectare plot.

“We are using intercropping, that’s why there are these wind-breaks of moringa trees which also fertilise the earth without us needing to use chemical fertilisers. Irrigation is also important,” said Espérance Nzuzi, president of Force Paysanne du Bas-Congo, a network of 264 smallholder farmers associations, including 87 created by youth.

On two hectares on the outskirts of Kinshasa, the Congolese capital, another youth association, Jeunes Dynamiques de Malulku (JDM), has also found success with the adoption of new techniques.

“We’ve only been practicing binage since we started this venture in 2010. We produced 15 tonnes of TME 419 from a single hectare that year, but in 2011 we harvested 28 tonnes from a hectare and a half, applying a little bit of chemical fertiliser,” said Anne Mburabata, 32, president of the association.

“Before we started popularising TME 419 cassava, we tested it carefully,” said Didier Mboma, who heads the technical innovation service at the Impresa Servizi Coordinati (ISCO), an Italian NGO which is making free cuttings of the new cassava variety available to farmers.

Mboma said that young farmers are strongly establishing themselves as productive farmers, while contributing to the country’s food security.

“Young farmers must move towards professionalisation, and take control of the entire value chain from production, to processing, to marketing,” said Dr. Christophe Arthur Mampuya, from the Ministry of Agriculture, Fishing and Livestock.

“The TME 419 variety is a high-yielding one. It’s also among the best varieties being promoted,” he said.

Mampuya said emerging young farmers must also plant woodlots, as adoption of the new cassava variety is scaled up.

“TME 419 is more popular in the west of DRC than in the east, but step by step, the variety could spread across the country,” said Paluku Mivimba, president of the National Confederation of Agricultural Producers of Congo.