SANTIAGO, Apr 23 2012 (IPS) - A criminal lawsuit against 1,500 former members of DINA, the secret police of Chile’s 1973-1990 dictatorship, is seeking to shed light on the most active player in the repression, which stretched outside the country’s borders. 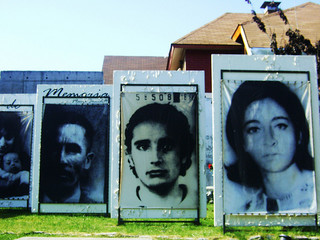 “We are trying to get the DINA (Dirección de Inteligencia Nacional) investigated as a criminal organisation,” Boris Paredes, a human rights lawyer, told IPS.

“The conclusion reached is that DINA operated as an extermination group, and as such, we believe that all of its members were part of an illicit association,” he said.

The charges filed this month by the Agrupación de Familiares de Detenidos Desaparecidos (AFDD – Group of Families of the Detained-Disappeared) is based on a memorandum that the office of the army chief of staff handed over to Judge Alejandro Solís on Aug. 28, 2008.

The memorandum, an official list of 1,500 names, was provided to the judge in connection with a case involving the victims of Villa Grimaldi, the largest torture and detention centre run by the 17-year military dictatorship of General Augusto Pinochet.

The 1,500 names on the list are of official members, from the senior-most military officers and civilians to the lowest-ranking staffers, of DINA, which was dissolved in 1977 and replaced by the Central Nacional de Informaciones (CNI – National Information Centre), that operated until the end of the regime.

“It’s important for the country to know which people participated in these bodies, because we must urgently make progress on passing legislation that respects human rights and that, as is being done in Argentina, prohibits human rights violators from holding public positions,” Paredes said.

He said several judges have taken the position that “no one who belonged to DINA was unaware of what was happening, and each one was a gear in a large machinery set up to kidnap, torture and kill people.”

AFDD spokeswoman Gabriela Zúñiga told IPS that the courts in Chile have handed down sentences against the “poster boys” of the repression, like army General Manuel Contreras, founder and chief of DINA, and Álvaro Corbalán, CNI head of operations.

“But there are a large number of agents who we don’t even think of as belonging to (DINA),” she said, mentioning Rosauro Martínez, a lawmaker of the co-governing right-wing Independent Democratic Union (UDI), who she noted is “paradoxically” a member of the Latin American Parliament’s human rights commission; Cristián Labbé, mayor of the upscale Santiago neighbourhood of Providencia,; and Augusto Pinochet Hiriart, the son of the late dictator.

“In a healthy society, which wants to resolve the issue of human rights violations by means of state policies, it is unseemly for terrorists and perpetrators of crimes against humanity to be in public positions, without having been held accountable in the courts and before society,” Zúñiga said.

Cath Collins, director of the Observatory of Human Rights at the Diego Portales University, said DINA operated as an “extra-institutional apparatus purposely created outside the discipline of the armed forces, to enable the military to deny that they were institutionally involved in the human rights violations.”

According to the information that the AFDD has compiled, and the evidence presented in court, DINA was responsible for the deaths of all of the AFDD members’ lost loved ones, and was also responsible for coordinating the repression against opponents with the rest of the dictatorships of the Southern Cone of the Americas, in what was known as Operation Condor.

The Pinochet regime killed and forcibly disappeared 3,216 people, while another 38,254 survived prison and torture, according to the Interior Ministry’s human rights programme, which based its figures on the 2004 and 2011 reports by a commission presided over by Catholic Bishop Sergio Valech (1927-2010) until his death, and the 1991 truth commission headed by Raúl Rettig.

The Diego Portales University’s Observatory of Human Rights found that nearly 70 percent of the cases of those who were killed or “disappeared” are still being investigated by the justice system, 22 percent have never gone to court, and the rest have been concluded.

The report says that between 2000 and 2011, 824 former agents of the dictatorship faced prosecution, although 31 of them died during that period.

Of the 793 former agents who are still alive, 544 are still under trial or are awaiting sentencing or appeal, 177 have been sentenced but have never been imprisoned due to benefits they have received, 66 are in prison serving their sentences, and six have been convicted but are free due to reduction of sentence or because their sentences were commuted.

The report also indicates that 47 of the former agents behind bars are serving their sentences in the Punta Peuco prison and 10 in the Cordillera prison, which are both exclusively for military personnel, and have comforts that “border on luxury.”

Punta Peuco’s inmates include Contreras, who is serving 25 life sentences – more than 300 years in prison – and his second-in-command, former Brigadier-General Pedro Espinoza.

Another of the human rights violators held at the modern Punta Peuco prison is former Brigadier-General Miguel Krassnoff, who was sentenced to a total of 144 years in prison on charges of forced disappearance and murder.

A tribute was paid to Krassnoff in November 2011 by Providencia Mayor Cristian Labbé, a former army colonel.

Although Collins stressed the large number of people who have been convicted of human rights violations in Chile, she said the sentences were considered light in comparison to the gravity of the crimes, and pointed out that only around one-third of those who have been sentenced are actually in prison.

Another pending challenge is repealing or modifying the 1978 amnesty for human rights abusers, which is still in effect.

In January 2011, Santiago prosecutor Beatriz Pedrals filed 726 new lawsuits which included, for the first time, legal action for the death of President Salvador Allende (1970-1973) in the Sept. 11, 1973 bombing of the La Moneda government palace during the coup mounted by Pinochet.

Previously, all of the lawsuits had been filed by survivors or by family members of victims.

“Progress has been made, but we have clearly not achieved full justice,” said Zúñiga. “Most of the perpetrators have got off scot-free.”

Paredes, meanwhile, said that in the last few years, “there have been important advances made in the courts, by magistrates who have courageously done important work…We have seen results with respect to unveiling the truth.”

But she concurred with Zúñiga that “justice is lame-footed because the sentences handed down are ridiculously short.”