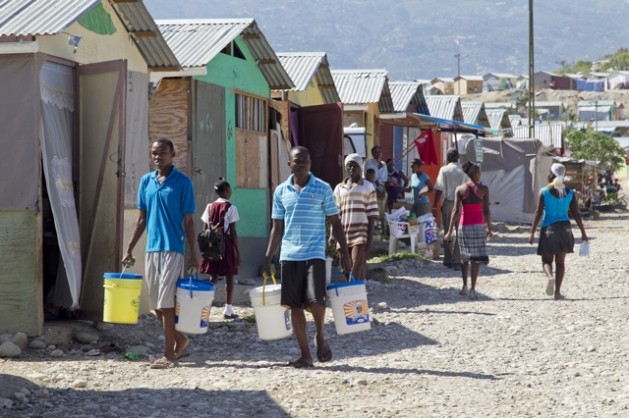 As of February, more than 400,000 Haitians were still living in tent camps two years after the country's devastating earthquake. Credit: UN Photo/Victoria Hazou

PORT-AU-PRINCE, May 14 2012 (IPS) - Almost three months after the seat was left vacant when the former prime minister resigned due to disagreements and political wrangling with the president, as of Monday, Haiti finally has a new prime minister.

Businessman Laurent Salvador Lamothe, 39, will succeed Dr. Gary Conille who served in the important post for only four months. The doctor – who has also worked for several United Nations agencies around the world – resigned in February because of disagreements with President Michel Martelly, elected in May 2011.

Lamothe, an international entrepreneur, has been a business associate of Martelly for at least the past decade. The two partnered in a firm specialising in long distance refill telephone cards, and in a real estate holding company.

Lamothe also heads Global Voice Group, a telecommunications firm in Africa and Latin America, an apparently successful business that allows him to afford villas in many African countries.

Before taking on the position of prime minister, Lamothe served as minister of foreign affairs in the Martelly-Conille government. He said he was practicing the “foreign policy of business” because rather than focus on foreign affairs, he focused on foreign investments.

The Lamothe-Martelly vision for the country is based, at least partly, on its rock-bottom minimum wage, the lowest in the Americas: about five dollars a day. Many studies show that the wage is insufficient to provide for a worker, much less for a head of household.

However, Martelly’s government has pushed the country and a series of free trade zones as a destination for foreign companies to do their textile and furniture assembly work.

After the ratification of his general policy in front of the Senate last week, Lamothe declared his new government will continue to focus on foreign investment. In his speech, Lamothe made so many promises, the daily Le Nouvelliste subtitled an article “Profusion of Promises.”

Among other things, Lamothe promised roads, construction sites across the country, and new or repaired irrigation systems.

“History will remember a Martelly-Lamothe government that worked relentlessly, night and day, on the construction of a fair and inclusive society and on the edification of a real ‘State of Law,'” said Lamothe.

The U.S. embassy in Port-au-Prince and the United Nations Mission in Haiti, MINUSTAH, welcomed Lamothe’s ratification by the Senate last week.

“Political stability in Haiti is a key issue for the people of Haiti and the country’s ability to attract local and foreign investors to create jobs and increase the level of economic development,” said the embassy’s statement.

Mariano Fernández Amunátegui, special representative of the U.N. secretary general and head of the MINUSTAH mission of over 10,000 soldiers and police, also applauded the ratification.

He asked the Haitian people to “rebuild with a spirit of consensus in order to consolidate the foundations of national stability, strengthen democratic institutions and ensure peace, security and Haiti’s development.”

But consensus is still a distant dream for many organisations that work for social justice, fair minimum wage, respect of human rights and who are also waiting for answers for thousands of earthquake victims still living in tents.

“The government never put in a social housing programme after the 2010 earthquake. Canada recently gave 20 million dollars to re-house more than 13,000 families, but all the government did was hand each family 500 dollars to rent a house. Where did the rest of the money go?” Renel asked.

“The population has nothing to expect from this extreme right government characterised by lies, which will never take in account the people’s dreams,” he said.

The head of the Association of Women Haitian Community Radio Animators (REFRAKA), Marie Guyrleine Justin, said the new prime minister won’t bring about any changes in government policy, which she characterised as more pro-business than pro-women’s issues.

“If we talk about Bellerive (the prime minister before Conille), Conille and Lamothe, it is a ‘change’ within continuity,” she said.

The vice dean of the Ethnology Faculty at the State University, Professor Jean-Yves Blot, said he that while didn’t see much hope for change with the new prime minister, the politician’s speeches surpassed religion in their use of promises and rhetoric to instill and maintain hope in a complicated situation, where over two-thirds of the population are un- or underemployed, where cholera is on the rise, and where almost a half a million refugees still live in tent cities.

“The politician uses the religious language to fool people and to make them hope for the situation to change,” Blot said, adding that the ratification process violated Haiti’s Constitution.

The ratification wasn’t simple. Lamothe was accused of holding dual citizenship, which would make him ineligible to serve as prime minister. In addition, the session at the lower house on May 3 was tinged with vote haggling. Eight out of the 30 senators boycotted their ratification session on May 8.

The businessman-turned-public servant is facing significant challenges: a paramilitary force claiming to be retired army soldiers, refugees, crime, an impoverished state and cholera.

The disease, which arrived in Haiti via Nepalese peacekeepers in October 2011, has so far affected more than 500,000 people and killed more than 7,000 others.