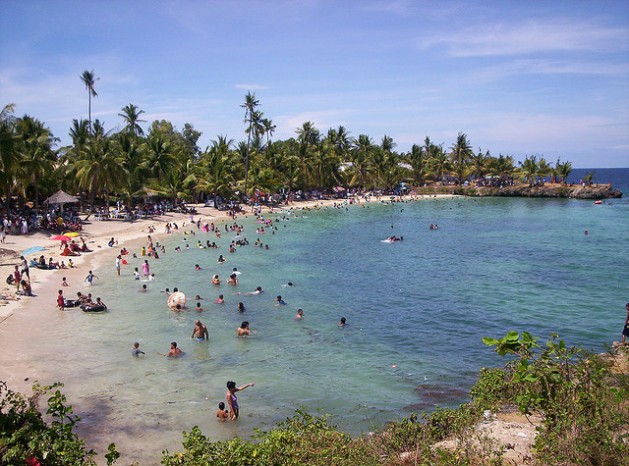 A recent social media campaign encourages tourists in the Philippines to leave "nothing but footprints" on the country's beaches. Credit: Patrick Tumalad/CC-BY-2.0

MANILA, May 18 2012 (IPS) - Seashells and corals are competing with styrofoam packs, food wrappers, cigarette butts, and plastic bottles for space on some of the Philippines’ most scenic beaches. Graffiti mars tourist spots like lighthouses and caves, proclaiming the names of recent visitors.

While many of the country’s popular holiday destination sites are postcard-perfect from afar, up close the scars of irresponsible travelers shine through.

Tourism is booming in the Philippines, lifting the hopes of millions of the country’s impoverished citizens for a better life. But the influx of travelers is also bringing with it some undesirable consequences – ones that may just end up spoiling the very things that make the country’s sites worth traveling to.

“Even if we put garbage bins labeled bio-degradable and non-biodegradable trash here in our resort, there are hard-headed people who just throw their junk food wrappers and litter anywhere,” Lina Rizon, a caretaker of a private resort in Guimaras island in the Visayas region told IPS.

Littering is just one of the problems starting to plague the once pristine tourist locations. In recent months, photographs showing people abusing or mishandling wildlife and marine life have also gone viral on social networking sites.

Some of these incidents include a case of a girl standing atop a whale shark (Rhincodon typus); a fisherman posing with a dolphin pierced by a fishing hook; and a group of divers posing while holding a sea turtle underwater.

The public outcry over these photos, published online by infuriated netizens, often results in local government units or regional offices of the Department of Tourism taking quick action. However, tour operators, tourists, as well as locals who have been caught engaged in such practices have claimed they were not aware that they were doing anything wrong.

“One time, we caught a visitor trying to smuggle a plastic bag full of live starfish she had gathered from the water out of the resort. We said she would have to pay a fine of 500 pesos (11.72 dollars) per starfish, so she returned them to the water,” added Rizon.

The activists initially started the website PhilippineBeaches.org to share their love for travel and the beach. The Facebook fan page has grown into one of the country’s largest unbranded travel communities with over 865,000 members.

Such awareness-building comes at a critical time, since management of the world’s oceans and seas is one of the seven critical issues that will be tackled in the upcoming Earth Summit, called Rio+20, to be held this Jun. 20-22 in Rio de Janeiro, Brazil.

“It is not enough to travel. We need to travel aware of our responsibilities to the environment,” said social media strategist and campaign co-founder Dimen during the launch last week.

“While we encourage people to travel and explore the many beautiful beach destinations in the country, we also want to make every Filipino a responsible traveler and an active steward of nature,” Dimen told IPS.

The goal of the campaign is to raise awareness on ways to minimise human impact on the environment and provide practical and specific guidelines to help travelers become more informed, more involved, and more in touch with the natural world.

The Project encourages netizens to Tweet with the hasthag #LeaveNothingButFootprints and #ResponsibleTravel whenever they share beach travel-related links.

Partnering with non-profit organisations like Save Philippine Seas (SPS) and Earth Island Institute Philippines, the Footprints Project envisions “a healthy, sustainable and successful tourism environment enjoyed, promoted, and guarded by people who are environmentally conscious, friendly, and responsible.”

The Project has identified tips for responsible travel, which have been shared on social media sites.

“Fish don’t use utensils. Avoid bringing disposable items to the beach. Bring your own tumblers and food containers,” proclaims one campaign poster shared over Twitter.

“Respect Wildlife: If you really want a souvenir, purchase products that are not made using threatened or endangered plants or animals,” goes another reminder posted on Facebook.

Anna Oposa, co-founder of SPS, which harnesses social media for environmental conservation and responsible tourism, stresses the need for young people to get involved.

“The most alarming environmental issue is apathy. It’s not enough for people to just complain about the problem, we have to do something concrete. What we want is to empower people to save our seas through their own actions,” Oposa told IPS.

The Philippines is the “world’s epicenter” of marine biodiversity, which means that conservation, protection, and restoration of its seas is not only of local significance, but international significance as well, according to SPS.

The group recently released a free mobile application for Android on Google Play, which will also be launched on iTunes in a few weeks to help people do their part.

“Aside from having a database of dive sites and dive shops, through the app, users can find volunteer opportunities and get in touch with different non-governmental organisations and conservation groups and report marine environment abuses and illegal practices they come across,” said Oposa.