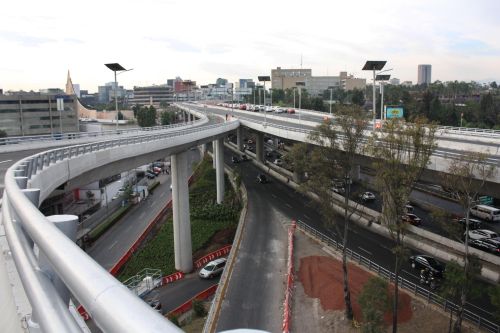 MEXICO CITY, May 8 2012 (IPS) - In his book “La Ville Radieuse” (The Radiant City), architect Charles-Édouard Jeanneret-Gris (1887-1965), known worldwide as Le Corbusier, proposed a city filled with skyscrapers, wide streets, cement and cars, but decorated with gardens. The Mexican capital seems to be following these principles.

In recent years the authorities in Mexico City have adopted policies that have favoured the mushrooming of apartment towers and the multiplication of automobiles – an approach that threatens long-term sustainability, according to experts.

“You can’t talk about sustainable development without combining social, environmental and economic sustainability,” Sergio Martínez, an academic at the Faculty of Economics of the National Autonomous University of Mexico (UNAM), told IPS. “The U.N. considers DF (the Mexico City federal district) to be a danger zone; it is shrouded in smog, and major action needs to be taken.

“There are well-designed plans for the city, but they are not implemented,” said the expert, who has studied comparative urbanisation in Mexico and China.

The United Nations Environment Programme (UNEP) describes a sustainable city as one whose achievements in terms of social, economic and physical development are made to last, and that has a supply of environmental resources on which it draws in a sustainable fashion.

The left-wing Mexico City government has been carrying out a Green Plan since 2007 – a set of strategies based on ideas such as fomenting the use of public transport and citizen participation.

The programme arose from a “green consultation” or popular environmental referendum carried out in 2007, with questions related to transport, water and waste management. But the results have been criticised by experts.

In the view of Arnold Ricalde, the founder of Organi-K, a local NGO, the city’s most serious problems are water, waste management and mobility.

“Wells are drying up, and it is becoming necessary to drill at ever deeper levels, which worries us. It is a serious mistake, like bringing water in from the surrounding areas. We need to have a long-term vision of the entire basin,” said Ricalde.

The water supply for the metropolitan area is 67,000 cubic metres per second, of which 43,000 are taken from the Valley of Mexico aquifer, which is already overexploited, according to the National Water Commission (CONAGUA).

Water consumption in Mexico City, which has 2,500 wells, is 350 litres per person per day, one of the highest levels in Latin America.

Waste water production is 431 cubic metres per second, only six percent of which is treated. Furthermore, the aging water system leaks like a sieve, and rainwater from storm drains goes to waste.

“Environmental concerns continue to be secondary to political and economic interests. The Green Plan does not take social and economic aspects into account. Urban aspects, which need to be included in a sustainable policy, are still missing,” Martínez said.

The government of Mayor Marcelo Ebrard, of the Party of the Democratic Revolution (PRD), promotes public transport, but at the same time builds arterial roads and viaducts that foment the use of private cars. There are 4.6 million vehicles a day in circulation in the metropolitan area.

A new 24-km line is also being built for the city’s subway system, which already has 11 lines. It will connect the east and west of the city, and is expected to start operating this year.

Bicycles have also received attention from the authorities. Ecobici, a bike-sharing programme, got under way in 2010, and has an average of 30,000 users a day with 1,200 bikes available at 90 stations.

“The policy is contradictory. Mobility is declining and building more roads does not solve the problem. More roads just mean more traffic. Private vehicles should be restricted. We do not understand how public and alternative transport can be promoted on the one hand, while on the other, viaducts are being built that encourage the opposite,” said Ricalde.

In the last few years, many people have started to grow vegetables or ornamental plants on the rooftops of condominium and apartment buildings, as well as vertical gardens or “living walls”, usually on the first few floors of the buildings.

Urban agriculture, which has flourished for decades in the south of Mexico City, is growing, and providing the city with more and more fresh produce.

Since Bordo Poniente, the capital’s largest garbage dump, was closed down in December, waste management has become a more challenging problem. Mexico City produces 12,600 tonnes a day of solid waste.

Of this amount, 3,000 tonnes are used to make compost, 800 tonnes are recycled, including plastic bottles, cardboard and metals, and 600 tonnes are converted into alternative fuels, according to the city secretariat of works and services.

The sustainability of the Mexican capital will be one of the biggest challenges for the next mayor, to be elected Jul. 1 and to take office in December.

However, the issue is completely marginal to the political platforms of the main contenders, Miguel Mancera of the PRD, and Beatriz Paredes of the Institutional Revolutionary Party (PRI).

“None of the candidates views the issue holistically; they just brush the surface,” said Ricalde, whose organisation carries out projects to foster environmental responsibility, the use of eco-friendly technologies, recycling, and reforestation, and to change consumption habits.

“The path to sustainability begins with cultural change. It is a way of life that requires a complete re-orientation of the entire lifestyle, and it is not going to be achieved just by using recycled paper or driving a hybrid car,” Martínez concluded.