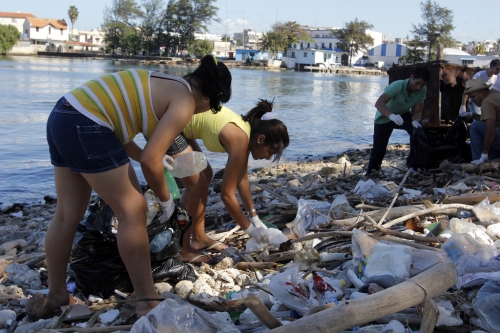 HAVANA, May 3 2012 (IPS) - Local communities can play a key role in adaptation to climate change if they are helped to properly understand the problem and take it on board. “Climate literacy is needed,” says Ángela Corvea, a long-time Cuban environmental activist.

“People do not always take these problems seriously, and do not see the risks involved in extreme natural events, which will become more frequent and increasingly severe,” Corvea adds, answering a question on Café 108, an initiative of the IPS Cuba office website to promote citizen participation in investigative journalism.

In her view, “small-scale actions by local communities can help deal with these changes, which are no longer merely imminent, but are already happening.” Rising temperatures and sea levels, recurrent droughts, and more intense floods and hurricanes are some of the consequences of climate change.

In 2003, Corvea created an environmental project named Acualina, to raise awareness about the environment, especially among children and teenagers. Every year for over a decade, she has organised coastal clean-up actions to contribute to the global campaign “Clean Up the World”, which started in Australia.

“We need to encourage savings of water and other resources, consume only what is necessary, avoid polluting, and try to keep our surroundings clean and pleasant; we need to recycle, and to be informed and teach others, especially children and young people; we need to act in solidarity, and to talk about these issues everywhere in order to draw attention and create awareness,” Corvea says.

Enrique Arango, an expert at the National Centre for Seismological Research (CENAIS), agrees with Corvea that the risks associated with climate change are only apparent in the long term, which makes it difficult to raise awareness at the community level. “It’s like smoking: no one sees the immediate effects, so people don’t give up the habit even though they know smoking is harmful,” he says.

In Cuba, it is difficult to separate the community from the centralised political and administrative bodies. “If an initiative does not come down from the authorities, it is not carried out or it remains unfinished,” one person wrote on the Café 108 comments site.

According to Arango, one way to teach people climate change literacy in their neighbourhoods is through interactive projects in which a high percentage of the population participates. A systematic approach, strong leadership, and above all political will are required at all levels; “otherwise, results will only be achieved while the programme is under way,” he said.

Social networks began to play a definite role in Cuba in creating ecological awareness in December 2011, when users of the microblogging network Twitter convened clean-up action and environmental education at the mouth of the Almendares river.

“Big things grow from small things. Everyone worked on their own little patch and helped each other. Ultimately, the issue was not just cleaning up the garbage, but provoking a reaction, raising the awareness of the population of the area itself to clean up and care for their own section of river,” twitterer Salvatore (@salvatore300) commented to IPS.

Osmel Francis, the leader of rap group Cubanos en la Red, promotes actions supporting social protection and care of the environment through his music. “Singers do not always realise how useful we can be to society,” he told IPS.

He has joined Corvea in clean-up actions on the Quibú river, one of the most polluted waterways in Havana.

Francis said there is a lack of environmental awareness, and the key to raising it is education. “The media must also get more involved, because we organise campaigns and clean-up actions but these are not always reported. I don’t see the environment as a priority issue (for the media),” he said.

“As for adaptation to climate change, even we (environmentalists) need education and training in order to learn more about what can be done, and how to reach people with our message,” Francis said.

Meanwhile, based on his experience as a photojournalist, Rolando Pujol is convinced that the population must have more knowledge of the risks it faces.

Often, coastal dwellers insist on remaining in at-risk areas because their life and livelihoods are closely linked to the sea. “They prefer to rebuild their homes time and again” after they have been destroyed by hurricanes, and they are also influenced by stories of places far inland that have had to be rebuilt, he said.

Ramón Pichs, an expert on climate change and development, said the role of the population in adaptation strategies was “essential” in Cuba and the rest of the Caribbean islands.

The success of any project will be greater “if the communities have an adequate level of awareness about the problems,” said Pichs.

In an interview with IPS, the Cuban academic described the active participation by his country’s citizens in health programmes and campaigns against disease vectors, and a project in Trinidad and Tobago for restoring the Nariva Swamp with the participation of several local civil society organisations.

The local level is key for climate adaptation, and the roles of the population and of the different organisations present in the community are essential for taking appropriate action, said Pichs, who also stressed the importance of links between these sectors and national institutions dealing with environmental issues.