NOVA IGUAÇU, Brazil, May 2 2012 (IPS) - Women in one of the poorest neighbourhoods of this city 40 km north of Rio de Janeiro no longer have to spend money on vegetables, because they have learned to grow their own, as organic urban gardening takes off in Brazil. 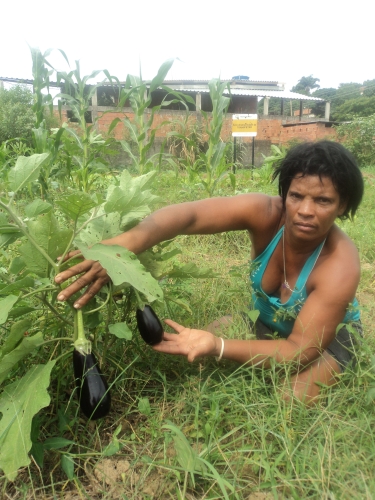 The land here is not fertile, like it is in the hilly region of the state of Rio de Janeiro that supplies the city’s markets. And the climate is sometimes too hot for vegetables to grow without stress or pests.

But in the poor neighbourhood of Parque Genesiano da Luz in the city of Nova Iguaçu, local women can now proudly say they eat what they themselves have grown.

Production is carried out on an individual basis, but everything else, including the sales of produce, is done collectively.

“It’s wonderful to see what you grow in the garden, bring everything home fresh, and give your children such healthy food,” Joyce da Silva, one of the members of the cooperative, told IPS. “So much so that when the low-production season arrives, we don’t even buy outside, because now we know that conventional products have a lot of poison. And I don’t want to eat that anymore.”

The gardens, which are each about 1,000 square metres in size, are located on what once were empty lots. Below them lie pipelines of the state oil company, Petrobras, which financed the project when it got under way in 2007.

When the financing dried up, many of the more than 50 families taking part at the time dropped out, due to a lack of resources.

But a group of women decided to continue, against all odds: they didn’t have funds, tools, or transportation to haul seeds and seedlings or take their products to the street markets to sell them.

But they were determined not to give up the independence they had achieved.

“Before getting involved in the cooperative, I only looked after my home,” da Silva said. “But afterwards, I gained economic independence. Another kind of independence is the health I achieved for my family. And also the improved living conditions. Things at home improved in general.”

The Urban Agriculture Programme, which now provides the women with technical assistance, was created in 1999, and was expanded into peri-urban areas in 2011 by AS-PTA, a non-governmental organisation that promotes urban family gardening and agroecology.

This programme is aimed at boosting the incomes of families in peri-urban areas – poor neighbourhoods on the outskirts of the cities of Rio de Janeiro, Queimados and Magé, where it benefits a total of 650 people.

The urban farmers do not use chemicals. Both the fertilisers and pesticides they use are homemade and non-toxic.

The majority of the food consumed in the city comes from far away, which means prices are driven up by transport costs, Marcio Mattos de Mendonça, the coordinator of the Urban Agriculture Programme, told IPS.

“The people who live in these communities need food from nearby areas,” he said. “Fresh vegetables are often left off the menu, and unhealthy kinds of food are given priority.”

In line with the global demographic trend, Brazil’s population of more than 192 million people is increasingly urban.

In 2000, 81 percent of Brazilians lived in urban areas, and 10 years later the proportion has risen to over 84 percent, according to the 2010 census.

But the growing urbanisation has not snuffed out the vocation for farming passed down through the generations, Mendonça said. In many poor urban areas like the favelas or shantytowns lining the hills of Rio de Janeiro, people have kept alive the custom of growing vegetables and medicinal herbs, and raising small animals like pigs, goats or barnyard fowl.

Aldeni Fausto, who always grew vegetables in her yard, inherited that practice which has been kept alive by migrants from rural areas and which she is now successfully reproducing within the city limits.

“Living in nature is what I like the most,” she said. “The pleasure of planting, harvesting and feeding ourselves, reviving our family’s roots and traditions and teaching them to our children; that is so important, so we don’t forget our history.”

Fausto, the president of the Univerde cooperative, said the distancing of rural migrants from their land led to “an increase in diseases, an imbalance in nature, and financial problems, because these people have nothing to eat and no interest in producing food.”

But “if people planted a little bit in every corner, they wouldn’t suffer from a lack of food,” she said.

Da Silva looks at it from another angle. “I never imagined producing food in the middle of the city. This area didn’t even have a market. And sometimes we couldn’t even afford to go somewhere else to buy things,” she said.

The visit to the cooperative was one of the field trips organised by World Nutrition Rio 2012, an international nutrition congress organised in Rio de Janeiro Apr. 27-30 by the World Public Health Nutrition Association and the Brazilian Association of Collective Health.

Among other issues, the congress discussed healthy eating habits, the planet’s resources, and the need to recognise and support traditional food systems – three core concepts that underlie the activities of the Univerde cooperative.

Da Silva said her family had various health-related problems linked to eating habits that she now understands were harmful.

Her daughter, for example, had anaemia. “Even though she is dark-skinned like I am, she looked sort of yellowish and was very weak. But with this food, she is now in good health, her skin shines, and her lips and gums are nice and red; this was the best thing about it, for me,” da Silva said.

Fausto also noticed improvements in her family’s quality of life. “Although I don’t look like it, I used to be fat. I have seen changes in my body, in my health, in my children’s diet. My mind now is more at ease, and I have found an equilibrium,” she said, pointing out that she is now free of obesity-related health problems like back pain and hypertension.

But the route these women chose is not an easy one. Without strong support, like the funding they received at first, the sustainability of the cooperative is always an issue of concern.

Of the more than 50 plots of land available for urban farming in Nova Iguaçu, only 22 are currently in use, said one of the visitors from the congress, Angélica Siqueira, a student in her final year of coursework for a degree in nutrition at the alternative economy centre of the Federal University of Rio Grande do Sul.

“There is still a prejudice that the countryside is poor,” Siqueira told IPS. Her team is attempting to apply urban and peri-urban farming techniques in poor neighbourhoods in her state, in southern Brazil, through the Technological Incubator of Popular Cooperatives.

The hope of the cooperative members is that now they have official certification, they will be able to sell their produce to the federal government’s school meals programme, which stimulates purchases by public schools of food produced by family farmers.

“Before, we didn’t even know how to run a company, and now we administer our own cooperative,” said Fausto, a true convert to urban gardening. “It’s therapy. One little plant gives you back gratitude and love.”