‘Amazon of Europe’ Threatened by a Straightening 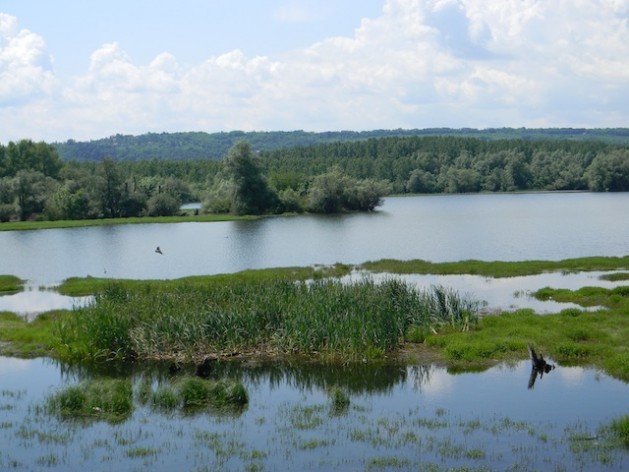 As the Danube naturally flows through Serbia. Credit: Vesna Zimonjic/IPS.

BELGRADE, Jun 30 2012 (IPS) - Wildlife is being increasingly threatened around the Danube river, the “Amazon of Europe”. The need for profit is taking over from the need to protect natural resources along the river.

Austria and Croatia are engaged in a major project to tame the Danube, to ‘correct’ its meandering stream into a straight one to facilitate commercial shipping along the river to the Black Sea.

“Threats to wildlife are serious,” head of the Worldwide Fund for Nature in Serbia Duska Dimovic told IPS. “Wildlife is trans-border; birds and fish go freely between Serbia and Croatia. Major works in one of the countries will influence all the immediate neighbours along the river.”

This Amazon of Europe comes with 800,000 hectares of green belt along its banks and those of its tributaries, the Drava and Mura, in five countries – Austria, Croatia, Hungary, Serbia and Slovakia.

This is a unique natural reserve of floodplain and wetland wildlife, home to a third of the region’s plant species, half of fish and mammal species and 63 percent of bird species.

Colonies of rare white tailed eagles, little tern, black stork, beaver and otter thrive in the area. The ship sturgeon here is nearly extinct but survives. The rare red deer can also be sighted coming to the riverbank.

And thousands of families depend on the Danube through fishing and cultivation, which is tuned to the river’s flooding and ebbing.

Commercial considerations threaten all this. The almost 3,000 km Danube connects the European continent from the West to the East. The 10 nations along its banks (Germany, Austria, Slovakia, Hungary, Croatia, Serbia, Romania, Bulgaria, Moldova and Ukraine) rely on it for cheap transport of goods.

Directly or indirectly, the Danube serves more than 40 European nations to move millions of tonnes of goods from Western Europe to the Black Sea annually. The river is linked to the Rhine-Main-Danube Canal that begins in the Rhine Delta in Rotterdam (the Netherlands).

“The interest of major European countries in commercial shipping is understandable,” says economist Nebojsa Savic. “Transport of trucks on huge barges is 14 times cheaper than sending them by road, and five times cheaper than putting them on trains.” A barge can carry up to 100 trucks. Commercial transport on the Danube has risen 27 percent in the past two years, according to the Statistics Office of Serbia.

The Danube runs 600 kilometres through Serbia. It enters in the north, from Hungary, forms the natural north-western border with Croatia, and flows further to Romania.

Major new works to straighten the slow flow of the winding Danube comprise building of groynes, T-shaped barriers which prevent meandering and the shifting of river banks, and also the creation of natural sand islands in the middle. But such works can also completely change the eco-system of the area. Birds and fish, and animals as well, lose their natural habitat and leave or even die, environmentalists warn.

Austria has built several dozen groynes along 49 kilometres of the Danube east of Vienna at a cost of 274 million dollars. Pressures by Hungarian environmentalists have prevented a similar same project in that country.

According to international plans for Danube regulation, Croatia could build 53 groynes along its 53 km of the river. The new government that took over earlier this year has yet to take a decision on this proposal, which is strongly opposed by environmentalists.

“That would mean the certain death of Kopacki Rit, for example,” says Arno Mohl, conservation expert from the Worldwide Fund for Nature, who visited the region last week.

Kopacki rit, situated near the confluence of the Drava river and the Danube in Croatia, is a unique natural habitat for more than 260 bird species. Among them are the great white egret and the European green woodpecker. Many fish and insect species thrive here as well.

“Let us hope that Croatia and Serbia will not make the mistake my country made in the 1970s and 1980s with regulation of the Danube flow,” Mohl added. He is from Austria, which began the project of taming the river decades ago.

In Serbia it remains unclear what will happen in the near future. General elections were held on May 6, but the country still has no government, and may not for more than a month.