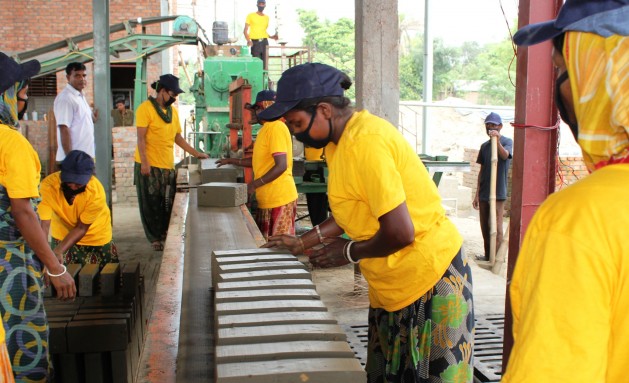 Currently, brick-making is a cottage industry and owners fire them with anything from coal and wood to discarded tyres and plastic bags, releasing in the process  GhGs estimated to be about nine million tonnes of carbon dioxide (CO2) equivalent annually, according to World Bank studies.

Also, a scientific paper published United States-based scientists in the Mar. 2 edition of ‘Atmospheric Chemistry and Physics’, an open access journal of the European Geosciences Union, said carbon contained in soot landing on Himalayan glaciers may be melting them faster than CO2.

The paper, focused on the impact of pollution on the snows of the Himalayas and Tibetan plateau, said the soot was affecting water flow in the rivers of the sub-continent that are fed by the Himalayan snows and also changing the timing and intensity of monsoon rains by surface warming.

Such studies have special relevance for deltaic Bangladesh, a country located in the shadow of the eastern Himalayas and through which the great snow-fed rivers of sub-continent drain.

Within that five-year period, the project’s 15 kilns will have demonstrative value, but also result in direct cumulative energy savings of 314 kilo tonnes of coal. They will save 1,470 kilo tonnes of CO2 equivalent by cumulative direct emission reduction during the 15-year expected service life of the kilns.

Bangladesh’s environment ministry has already ordered a phase-out of the outmoded fixed chimney kilns (FCK) in the country by September 2013 and their replacement with the improved Hybrid Hoffman Kiln (HHK) or the vertical shaft brick kiln (VSBK).

HHK technology, modified by the Chinese and introduced by UNDP through a local consulting firm, Clean Energy Alternatives (CEA) is, unlike other types of kilns, capable of producing bricks round the year.

“The clay used to make the brick mixes in 30 percent dust coal, so, when burning in the oven it requires less energy and produces less CO2,” Rahman explained.

HHK units emit 40 – 60 percent less dust and carbon per brick produced than the traditional FCKs and do not emit black smoke. HHKs also use insulation around their walls to capture lost heat from the oven chambers, making for efficient use of energy.

Best of all, HHK technology is designed to use only coal as fuel and this is expected to reduce the chopping down of forests for firewood, especially in the Cox’s Bazaar and Khulna regions.

“This project is the first climate mitigation project in Bangladesh and is supported by UNDP and the Global Environment Facility,” Stefan Priesner, country director, UNDP Bangladesh, tells IPS.

According to Priesner, if successfully implemented, the project could result in annual reduction of GhG emissions equivalent to that from 230,000 passenger vehicles or carbon sequestered by more than 250,000 acres of forests.

“While the initial investment is significant, the scale of production is multiple (more than 7) times higher than a conventional factory,” said Priesner. “This in combination with the up to 50 percent energy savings makes this technological advancement an attractive value proposition for investors.

“Importantly, it addresses the problem of the largest stationary source of GhG emission in the country; saves energy; preserves the soil quality and creates ‘green jobs’ that have an important role to play in sustainable development and poverty eradication of Bangladesh.”

Md Murtoja Ali, marketing manager of CEA, told IPS: “By end of 2014 we will have 16 demonstration factories that will help transfer the technology and we are hoping to train workers, operators and managers from about 100 existing factories.”

Neal Walker, resident coordinator of the U.N. in Bangladesh, told IPS that HHK technology was attractive to entrepreneurs because it “gave investors a relatively quick return, steady production in all seasons over many years and it is environment friendly and saves soil and energy.”

Adopting a carrot-and-stick approach, local banks are lending only to those brick-making units that comply with the new regulations from the department of environment. All unregistered brick factories must apply for approval by September this year or they stand to lose their operating licenses.

Mijanur Rahman, president of Bangladesh Brick Manufacturing Owners Association, told IPS, “We welcome the change, but adapting to the new technologies requires huge investment as the modern machines and the high ground needed for round the year production is very costly.”

Rahman’s concerns are being addressed by the Bank and other partners like the UNDP and the Asian Development Bank (AsDB).

Anqian Huang, finance specialist of AsDB in Dhaka, told IPS:  “AsDB is processing a capacity building technical assistance this year to support a 50 million dollar loan implementation. The loan would have a component to help concerned ministries to strengthen enforcement to phase out the FCKs.”

The state’s central bank has also introduced soft loan schemes to support HHK technology in the light of its energy efficiency and its formal industry characteristics.