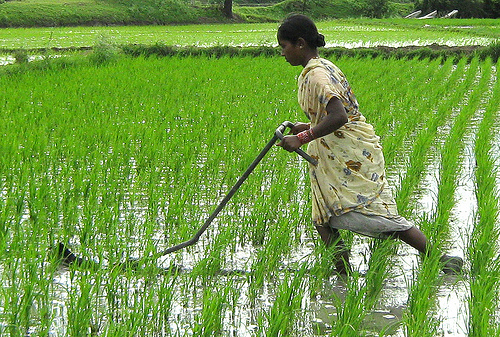 The Mandava weeder, a farmers' innovation, is lightweight and easy for women to use. Credit: Manipadma Jena/IPS

RIO DE JANEIRO, Jun 17 2012 (IPS) - When world leaders from over 100 countries wind up their three-day Rio+20 summit in Brazil next week, they will leave behind the shattered remains of a slew of proposals that never got off the ground.

After continued stalemate – over issues relating mostly to financing and technology transfers – the 193-member Preparatory Committee (PrepCom) failed to reach agreement Friday on a blueprint for a green economy and sustainable development worldwide.

A consolidated document produced by Brazil, in its capacity as president of the summit (also known as the U.N. Conference on Sustainable Development), is likely to be the final action plan titled “The Future We Want” to be endorsed by world leaders when they arrive in Rio Jun. 20.

The proposals, including the strengthening and upgrading of the U.N. Environment Programme (UNEP) in Nairobi to a full-fledged U.N. agency, are conditional on General Assembly approval.

The target to achieve MDGs, including the reduction of extreme poverty and hunger by half, is the year 2015. The time frame for SDGs is expected to begin 2015 as an immediate follow up to MDGs.

Asked for specifics, Secretary-General Ban Ki-moon told reporters, “It’s very difficult for me to say anything which may give the impression that I am prejudging any future decision by member states.

“We have eight MDGs, and whether it will be five, seven, eight or 10 goals for sustainable development, that is now still under consideration,” Ban said.

“How are these SDGs to be achieved?” he asked, and pointed out that the United Nations needs institutional tools to help implement these goals.

One of the tools will be a revamped UNEP. Another would be the establishment of an intergovernmental high level political forum, building on the existing U.N. Commission on Sustainable Development (CSD) to follow up on all sustainable development commitments.

The summit will recommend the first meeting of the high-level forum to be held during the 68th session of the General Assembly which begins September 2013.

There are two other new proposals in the plan of action: the creation of a capacity development mechanism, within the United Nations, for achieving SDGs and the establishment of an intergovernmental process, under the General Assembly, to propose options on an effective Sustainable Development Financing Strategy to facilitate the mobilisation of resources.

Still, the plan of action does not have any firm financial commitments or commitments to help transfer technology to the world’s developing nations.

“As a snapshot, out of 287 paragraphs, only seven begin with ‘we commit’,” said Daniel Mittler, political director of Greenpeace International.

“Voluntary” appears 16 times, while “as appropriate” – U.N. language for doing nothing – dominates with 31 entries, he said. Statistics are not everything, but these numbers show that governments, overall, are in the business of delaying and doing nothing in Rio, he added.

“One saving grace,” Mittler told IPS, is the commitment to an Oceans Rescue Plan for the High Seas.

“Whether governments commit to an Oceans Rescue Plan is now a key test of whether this Summit delivers anything at all,” he said.

But the blueprint for sustainable development bypasses some of the recommendations made by the 22-member panel, co-chaired by South African President Jacob Zuma and Finnish President Tarja Halonen, which produced a highly ambitious report last January.

The wide-ranging recommendations, directed at the Rio+20 summit, included the creation of a set of Sustainable Development Indicators (SDIs) that go beyond the traditional gross domestic product (GDP).

Providing a “timely contribution” to the Rio+20 summit, the panel also called for an annual Global Sustainable Development Outlook Report and the creation of a U.N. Scientific Advisor.

“If broadly adopted, the latest text from the Brazilian government would condemn the world to a future of pollution, plunder and destruction. There is no action here, no commitment, no future we want,” said Mittler of Greenpeace.

The 1992 Earth Summit in Rio resulted in the creation of the Global Environment Facility (GEF) and the drafting of three U. N. conventions covering climate change, biodiversity and desertification.

Tricia O’ Rourke of Oxfam International told IPS, “Our topline view is that (the Brazilian text) is a more streamlined text, more likely to be agreed, less likely to deliver sustainable development.”

She said it has been skillfully constructed to clear controversy and promote consensus, but even if agreed it would not re-orient economic growth towards putting people and planet first.