The tax would cover stock trading, derivatives and other financial instruments, but, proponents say, would have a significant impact only on so-called high-frequency trades, in which computer-driven speculators typically hold stocks for mere milliseconds.

“These taxes will rebalance financial markets away from a short-term trading mentality that has contributed to instability in our financial markets,” the letterstated. “The primary role of financial markets is to raise investment, allocate resources efficiently, and mitigate risk. However, much of today’s financial activity does not contribute to these goals.” 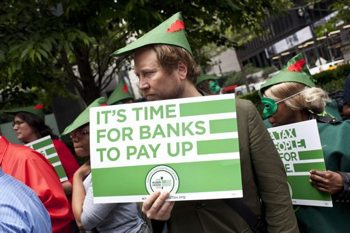 Calls are growing across sectors in the United States in support of a financial transaction tax. Credit: Robin Hood Tax USA/CC by 2.0

In the United States, the tax proceeds – in the tens of billions of dollars – could be used in a variety of ways. Many on the international scene are calling for such revenues to go to the world’s poorest and to those countries worst affected by climate change.

The letter’s signatories, in a notable break from the sector, include seven former executives of Goldman Sachs and JP Morgan, two of the United States’ largest players in the financial services industry. They also include several hedge-fund operators and four current and former heads of European banks.

“Whether agreed by the G20, EU, or by individual countries”, the letter noted, an FTT “offers a real opportunity to help restore the financial sector to its proper role, while raising massive revenues for people in urgent need at home and in the world’s poorest countries”.

With the U.S. government strapped for cash and facing down the prospect of an unprecedented drop-off in revenue at this year’s end, proponents of the tax see the potential for real movement on a FTT in the United States as a way to raise revenue.

Representative Peter DeFazio has sponsored legislation that would impose a levy of .03 percent (three “basis points”) on trades, one of several such bills currently pending.

“We are looking for a point that won’t have a dramatic, depressive impact on legitimate trading but where we expect to have a substantial impact on those doing supercomputer trading, creating a great deal of volatility,” DeFazio told journalists Thursday.

Anticipating harsh blowback from the letter, one signatory, Wallace Turbeville, a former vice president at Goldman Sachs, pointed out that “equity and bond funds charge for managing portfolios amounts at 100 to 150 basis points. This [tax] is not the kind of additional cost that’s going to materially affect any firm’s behaviour in terms of where they locate their business.”

Turbeville, speaking Thursday at the letter’s unveiling, said financial transactions in the United States amount to about 150 trillion dollars per year, a dangerous proportion of which are high-frequency trades, which he described as “not designed to help businesses and governments raise money from pension funds, endowments or other sources of capital that could fund new useful, productive projects”.

“These transactions are designed merely to generate profits from the process of the capital market,” Turbeville added.

While some have criticised the .03 level as too low, it would nevertheless generate revenues of tens of billions of dollars a year in the United States alone.

“In return, investors get a much more stable environment for their investments, in addition to potentially generating 35 billion dollars a year, to invest in infrastructure or to defray the deficit,” DeFazio said.

“If it did cause hedge funds to move somewhere else, that would not be the end of the world. For legitimate, long-term investment, this would not have an impact.”

While a transaction tax has been discussed for years, it recently became a central focus for activists in the Occupy Wall Street movement, spurred in particular by the union National Nurses United. On Tuesday, demonstrations throughout the United States sought to bring more prominence to the issue, referring to the levy as a “Robin Hood tax”.

“What we want is a robust Robin Hood tax on Wall Street that would…raise hundreds of billions of dollars and direct that money to critical public services in America and globally,” Matthew Kavanagh, a spokesperson for the Robin Hood Tax Campaign, told IPS.

Although they may largely see eye-to-eye on this issue, organisers involved in Thursday’s open letter were quick to distance themselves from the activists.

“This is not Wall Street bashing; this has nothing to do with Occupy Wall Street,” said Leo Hindery, Jr., a managing partner with InterMedia Partners, a private equity fund.

“This is about reining in something we all agree needs attention, and doing it in a way that is very revenue-sensitive in the context of the debt crisis.”

The U.S. move mirrors – though lags behind – actions in Europe. While a European Union-wide transaction tax was floated last fall, it ran into strong opposition from the UK, which already has its own relatively modest FTT covering only standard stocks.

In May, however, the European Parliament voted overwhelmingly to set a blanket tax on trades at .1 percent and on derivatives at .01 percent. Several EU countries are now reportedly ready to move forward, either collectively or individually, led by Germany and France.

EU finance ministers are expected to vote on such a plan on Friday, though the UK and Sweden have said they will continue to oppose the measure. Even if it doesn’t pass, supporters say a strong vote will be an important for maintaining momentum.

Earlier this week, the head of the European Commission, Jose Manuel Barroso, promised to continue pushing for a transaction tax, stating that he hoped Europe would pass such measures soon and that the rest of the world would follow suit.

“It is a question of fairness and it would enable us to help more of the world’s poor,” Barroso said, addressing the Group of 20 (G20) major economies summit in Mexico.

The issue was expected to take up a significant part of discussions at the summit, held Jun. 18-19, but ultimately was overtaken by the more pressing concerns of Europe’s faltering economies.

Despite the options available to them, such as backing an FTT, Carlos Zarco, the head of Oxfam Mexico, an aid agency, told IPS, “leaders have shown no interest in sourcing finance for poverty eradication and climate change adaptation in developing countries.”