Waking Up to the Price of Corruption 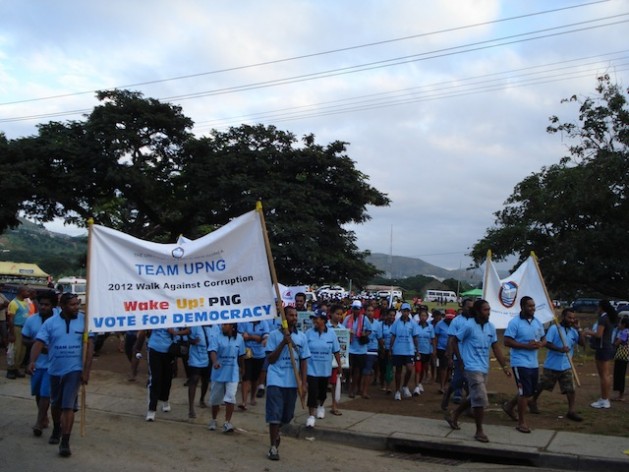 PORT MORESBY, Jun 14 2012 (IPS) - Weeks ahead of a national election in Papua New Guinea, 3000 people gathered in the capital, Port Moresby, for the sixth annual Sir Anthony Siaguru Walk against Corruption organised by Transparency International, PNG, to peacefully protest about an issue that affects every aspect of citizens’ lives.

Government sources estimate that one billion kina (about 471 million dollars) worth of public funds are embezzled every year through corruption, even while 37 percent of the population lives below the poverty line, only seven percent has access to electricity and half of all rural health centres do not have essential medical equipment.

Member of Parliament for Moresby South, Dame Carol Kidu, who led the walk with the theme, ‘It’s Time to Wake Up PNG’, declared in a public address, “Corruption destroys development and we all want our country to develop into a just country. We are too blessed with too many natural resources. Our most valuable resource is our children. We must stop corruption before it destroys the future for our children.”

Participants represented schools, government departments, universities, civil society organisations, corporate and small businesses, local media and communities. Augustine Hala, who led a group of youth from the local Fanima community, said, “We don’t have the capacity other than to speak out. This terrible corruption is affecting people everywhere. Corruption is now a disease, even in the school system and employment industry.”

“There are different sets of rules here, one for ordinary people and one for those in power,” he continued. “We feel we have been denied opportunities and public services.”

Transparency International rates Papua New Guinea at 2.2 on a scale of one to 10 in its Corruption Perceptions Index, where 10 is the most transparent. Corruption is prevalent in the public and private sectors at all levels of society. In the government, it manifests as nepotism, bribery to secure preferential treatment, misappropriation of public money and state assets and procurement breaches.

The National Research Institute (NRI) reports that “Electoral politics account for the majority of government over-spending and official corruption. If returned, MPs seek to recover their considerable political expenses.”

This often results in “an offer to pick up the cost of election expenses or to be given a ministerial post, (rather) than party loyalty, which is based on common policies or ideas”. Candidates are also under pressure to reward supporters, while voters are frequently forced, through clan obligations, to support their ‘wantoks’ or relatives at the ballot box.

Melanesian society reinforces ideas of leadership and power based on patronage and those who can accumulate wealth, which is then distributed to fellow clansmen. It is not uncommon for politicians to build their political careers while simultaneously building private businesses.

However, according to a report by the NRI, in a country where there are few avenues for people to acquire monetary wealth, “Personal priorities tend to take precedence over community and national priorities and the State is seen as a source of money and other resources.”

Yet Papua New Guinea is not a poor country. It has immense natural resource wealth extending from minerals, such as copper and gold, to natural gas and the nation’s vast rainforests, which have given rise to extensive legal and illegal logging activities.

But the dissipation of national revenues through corruption has left little legacy of development. A Public Accounts Committee Inquiry into government departments and agencies from 2003-2008 revealed that approximately one billion kina of state money had been misappropriated, including a staggering 100 million kina from the National Forest Authority, which hands out logging permits.

Ray Anere, senior research fellow at the National Research Institute, said, “There is an association between the wealth generated from natural resource development and corruption; however corruption has (also) occurred independent of the wealth created. There would still be corruption even if the wealth created was less than it is now – in the billions.”

After years of inquiries that have led to few prosecutions and negligible success in the repossession of stolen public assets, the government announced the launch of an anti-corruption fighting team, the Investigation Task Force Sweep, in August last year.

Following seven months of scrutinising government departments, the team made dozens of arrests of former and serving government ministers, MPs and businessmen, and produced a report in May which concluded corruption had become “institutionalised”. According to Anere, the operation has, to date, recovered 20-50 million kina (nine to 24 million dollars) of public funds.

“It has been a very valuable effort on the part of those involved,” Lawrence Stephens, chair of Transparency International in Papua New Guinea, commented. “Clearly the government realises we need to reduce the level of corruption. It is, however, well known that people implicated in a litany of appalling cases of corruption are still closely involved in many government initiatives.”

Anere believes “there is political will to combat corruption. What is needed is adequate funding with appropriate powers to investigate and prosecute, and institutional capacity on the part of the relevant agencies of state.”

Fighting corruption also involves “creating a culture of resistance and a fear that bribes, if demanded or paid, might result in penalties, which are dangerous to those involved,” Stephens added.

A multi-sector strategy to prevent and reduce corruption, according to the NRI, should comprise education, special training of political candidates in good governance and duties of public office, laws against corruption and to protect whistleblowers and ensuring politicians and public servants register their assets.

The stakes are high. If corruption continues at current levels for another ten years, Stephens predicts the suffering of ordinary people will intensify. “The privileged will be even better off (but) the majority will be impoverished, under-educated and provide a nursery for violent crime,” he claimed.