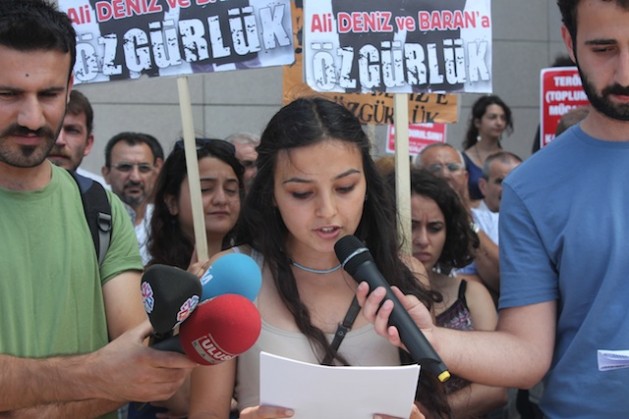 ISTANBUL, Jul 17 2012 (IPS) - Ahmet Saymadi slumps into a cafe, gives a limp handshake to some friends, and then stops at a computer to do some work. When he finally pauses for a tea break, he pushes a CD across the table, which contains the names of all 768 student activists currently imprisoned in Turkey’s jails.

Saymadi has been working steadily for the past year to complete this comprehensive report, during which time the number of politically active youth behind bars has risen steadily.

Although they are not themselves Kurdish, the two students were prosecuted for protesting the government’s closure of the Kurdish National Party in 2009 for its alleged association with the Kurdistan Workers Party (PKK). Nayır and Kılıç were just two of hundreds of students detained for acts of political protest dubbed as “terrorism” by the state.

Academia, human rights activists, and members of the secularist opposition Republican People’s Party (CHP) are growing increasingly disconcerted by the number of young people caught up in the government’s aggressive clampdown on perceived opponents.

Between 2005 and 2007, the ruling Justice and Development Party (AKP) amended a series of laws, causing a 2.8-fold increase in the number of people detained on terrorism charges by 2011, according to the Ministry of Justice. This number has continually increased in 2012.

“They (the students) are mostly detained on the basis of our draconian anti-terror law,” Mehmet Karli, professor of international law at the Galatasaray University, told IPS.

“The Turkish state has a history of draconian criminal laws. Under the rule of the AKP this hasn’t changed. Since 2005 it has (been) exacerbated.”

Student arrests began to climb with the creation in 2006 of ‘assize’ courts. These state security courts came under intense pressure from the Europe Union for alleged human rights abuses but instead of being held accountable, they were granted punitive powers by the government to apprehend political dissidents.

“They specialise in trying organised crime, but their main aim is to try political ‘crimes’,” Karli said.

Anti-terror laws have also been used to imprison journalists, artists, activists, and even non-AKP members of parliament for association with or membership in the Kurdistan Workers Party (PKK); ties with other Kurdish groups; and for alleged participation in the coup-plotting group, Ergenekon.

A lawyer and activist working on behalf of arrested students, Olguner Olgun, estimates about 90 percent of the imprisoned students are Kurdish, and that most were arrested for demanding Kurdish rights.

“There are serious problems with respect to the rights of Kurds in Turkey. Some (students) expressed discontent, but the fact that there is a PKK doesn’t mean that all Kurds are members of the PKK and engaged in violent activity,” said Karli, who has read over 200 indictments of students detained for terrorism, but has yet to find any connection with violent activity.

Absent any substantial evidence of violent actions, most prosecutors cite an anonymous witness described as a “patriot”, who offers relevant information to the state associating defendants with terrorist organisations.

Anything from Facebook messages to text messages are used as evidence, according to Olguner. Anonymous witnesses can’t be cross-examined, making their evidence difficult to challenge in court.

The majority of arrested students are languishing in pre-trial detention, where they are forced to wait months before they are presented with a statement from police or allowed contact with lawyers. Olguner said that the average waiting time before a first trial is six months.

“They extend the surveillance time so police can better prepare an argument with prosecutors for the first trial,” Olguner contended.

In most countries, a person is innocent until proven guilty. In Turkey, specifically with cases of terrorism, authorities assert a person is guilty and detain him or her until the defendant is proven innocent.

Nayır and Kılıç had a record of about two court hearings per year.  The average minimum of hearings before a verdict is six. Given those statistics, a student may be detained for three years before receiving a verdict.

Arrested students also face disciplinary action by university administration before a final verdict is handed down. Rules overseen by Turkey’s Board of Higher Education, YOK, criminalise “ideological activity”. Students receive warnings and suspensions, and sometimes even risk expulsion, if caught engaging in almost any kind of political activity the government considers undesirable.

Across the country, solidarity groups are taking action against student imprisonments. Their campaign strategy is to widely publicise the students’ cases.

Letters students write from jail are posted online, and translated into English in hopes that other countries, especially EU member states, will put pressure on the Turkish government.

“Our biggest difficulty is getting true knowledge of these cases published in Turkish media. The media works for the AKP, and don’t reveal the truth to the public,” Saymadi told IPS.

But the prevalence of independent media has enabled word to spread, with news of detainees appearing on solidarity blogs, Facebook groups, and left-wing news websites.

Solidarity actions continue to take place on university campuses, even though most university administrations disapprove of political protest. Students at graduation ceremonies open their robes in unison to reveal T-shirts bearing the mantra “freedom for detained students” printed in bold letters.

So far, 62 students detained on terrorist charges have been released.