ROME, Jul 24 2012 (IPS) - Six months have passed since the beginning of the United Nations International Year of the Cooperatives (IYC). There can be no doubt it has fallen far short of its goal of calling the world’s attention to this formidable instrument of social production. 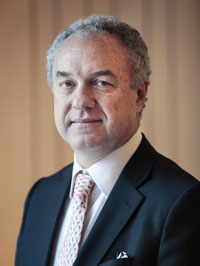 While there has been a rise in the dissemination of information related to cooperatives, it is minuscule in comparison to the vast importance and potential of the cooperative movement worldwide.

Cooperativism emerged in the early 19th century in England where it was promoted by unions opposed to the capitalist expansion driven by the Industrial Revolution. It assumed the function of improving the buying power of salary workers through consumer cooperatives.

Since then the system of cooperative property has spread throughout the world, in industry, the primary sector, trade and other branches of the service sector.

Cooperatives also have a significant presence in the media, with hundreds of outlets dedicated to spreading information about the world of cooperatives. Moreover there are thousands of media cooperatives, including the Associated Press in the U.S., Le Monde, the French newspaper, and the IPS news agency, which, since 1964, has covered the subject of cooperatives as a part of its editorial focus on development and civil society, particularly in countries of the South.

The International Co-operative Alliance (ICA), founded in 1895, is comprised of 267 organisations from 96 countries representing approximately 1 billion individuals worldwide. Around 100 million people work for a co-op globally

The Director General of the U.N. Food and Agricultural Organisation, Jose Graziano Da Silva, notes that farmers associations generate huge benefits for producers, increasing their capacity to take advantage of opportunities, gain access to services, get better prices when purchasing inputs and achieve larger margins in sales. Moreover, the benefits generated by cooperatives are an engine of local development, strengthening communities and activating economies, creating jobs, and boosting income.

Da Silva sees cooperatives as a strategic ally in promoting the sort of environmentally-sustainable socio-economic development that the world needs. The concept implies that in order for development to be sustainable, hunger and social exclusion ­which affect more than 900 million people­ must be overcome.

In Costa Rica, a third of economically active people participate in cooperatives. According to the country’s president, Laura Chinchilla, “Cooperativism is a decisive factor for modernisation and the technological development of productive systems. In Costa Rica it is responsible for more than four percent of the gross domestic product (GDP) and more than ten percent of the agricultural GDP. Thanks to cooperativism Costa Rica has become a model of social inclusion. Cooperatives play a crucial role not only in economic activities but also in education and health services. For example, 23 percent of the school system is cooperative.”

Brazilian cooperativist Roberto Rodriquez argues that “economic globalisation disturbs peace and democracy because it generates social exclusion and the concentration of wealth, while cooperatives, which work as the economic element of social organisation, counter this tendency. Cooperatives serve as a bridge between the market and collective well-being and are therefore a force for the defence of democracy and peace”.

As we can see, the importance of cooperativism as an alternative to the current crisis-stricken economic models stands in contrast to the failure of the IYC to revive and refresh the media’s interest in the cooperative world. This can be explained in part by the dispersion of the message despite the efforts of the U.N., the IYC, and numerous cooperative media of the world. There has been a failure to effectively coordinate cooperatives and the media in a way that creates real synergy.

It is clear that the cooperative movement needs a more up-to-date strategy for social communication as well as the appropriate instruments to put out its message and conduct its activities. What is needed is a real pool of media cooperatives, which should be brought together to organise and coordinate their information and efforts in a way that will strengthen the impact of their central messages. Similarly they should create common virtual tools to circulate both traditional content and new products of the social media.

But the effectiveness of these instruments will depend on the degree to which they involve journalists that are specialised in cooperativism. As in other branches of journalism, specialisation is a clear necessity.

There are no social or economic needs that cooperativism cannot address. It has an essential role to play both in the major challenges facing humanity and as a form of horizontal, participatory management that is able to generate better results. Indeed, there has never been a time in which cooperativism was more urgently needed as a mode of organisation and as an alternative to the corporate mode of production. No approach is more modern and more necessary than cooperativism. (END/COPYRIGHT IPS)