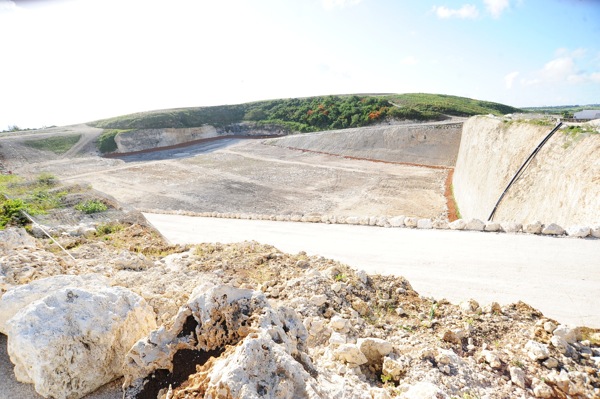 BRIDGETOWN, Barbados, Jul 18 2012 (IPS) - When it comes to pursuing a greener path to economic development, the tiny Caribbean island of Barbados is not about to allow its small size and limited resources to get in its way.

The island has opened the first phase of a multi-million-dollar state-of-the-art facility that will create energy from the tonnes of waste produced by households across the country.

Opening the facility, known as “Cell Four”, Prime Minister Freundel Stuart said Barbados has no choice but to diversify its energy resources to include more renewable and sustainable ones.

“Our fuel bill represents the heaviest demand on our foreign exchange. Fuel is of course, essential for the generation of electricity, the manufacture of goods, and for the transportation of goods and people.”

“These three development-oriented activities account for over 80 percent of our fuel consumption,” Stuart said.

With a population of 285,000, Barbados has a mammoth annual fossil fuel bill. According to Environment Minister Dr. Denis Lowe, it makes economic sense to convert waste to energy rather than simply burying it.

“We have a gluttonous appetite for energy,” he said. “It is in our best interest to ensure that we find alternative methods of generating energy to save our energy costs.”

United Nations Secretary-General Ban Ki-Moon recently appealed to Barbados and other Small Island Developing States (SIDS) to free themselves from dependence on fossil fuel imports and transform their energy sectors to encompass modern, efficient, clean and renewable sources of energy.

Stuart said he agrees wholeheartedly with the Secretary-General, pointing out that last year, his country spent just under 4 million U.S. dollars on oil imports, or six percent of its gross domestic product. This spending has hurt direct production costs and the overall competitiveness of the Barbadian economy.

“Although many SIDS are energy deficient in conventional energy, limitless potential for renewable energy and energy efficiency resides in our countries,” Stuart said.

“The fundamental issue then is how, do we, as Small Island Developing States with inherent structural problems and limited resources, convert this renewable energy potential into a tangible product that is accessible, affordable and adaptable?”

Barbados has been actively promoting sustainable energy practices both on the supply side – mainly using renewable energy sources – and on the demand side, encouraging energy efficiency and energy conservation, in an effort to reduce its dependence on fossil fuels, enhance energy security and stability, improve the economy’s competitiveness and foster greater environmental sustainability.

Over 40,000 solar water heaters have installed on domestic and commercial buildings in Barbados, according to Stuart. At more than 45 percent, it is the fifth highest penetration of solar water heaters in the world. “We are using the country’s success in this industry as a platform for renewable energy development,” he added.

These solar water heaters save consumers over 12.95 million U.S. dollars in energy costs annually, Stuart said, noting that these results demonstrate how “a combination of local entrepreneurial spirit, consumer advocacy, and government support through the medium of fiscal incentives can lead to a change in the energy use paradigm”.

Shawn Phillips, an assistant manager with the Sanitation Service Authority (SAA), outlined some of the features of the new Integrated Solid Waste Management Programme, of which Cell Four is a part. He said power generated by the waste-to-energy plant would be fed back to the national grid.

“Cell Four will be receiving waste residue from the proposed waste-to-energy plant which will provide thermal treatment to solid waste,” he said. It will produce an estimated “10 to 14 megawatt hours of electricity”.

In addition to Cell Four, Stuart announced plans for the construction of a green energy, mass burn complex at Vaucluse that would generate electricity by converting the bulk of the waste from the Mangrove Pond Landfill into energy.

He explained that it would utilise wind and solar energy resources and would have a gas-to-energy component that would harness many of the harmful greenhouse gases produced by the landfill.

“The facilities will complement the already existing Mangrove Pond Landfill and the waste  management facility known as Sustainable Barbados Recycling Centre,” he said. It will help to offset the country’s “dependence on fossil fuel and reduce our foreign exchange risks” even as it offers “an environmentally sound alternative that would…reduce our potential contribution to the causes of climate change”.

The prime minister said that although Barbados depends on such traditional sectors as tourism, agriculture, manufacturing and international business for its foreign exchange earnings, the country did need to diversify.

He noted that there was an emerging recycling sector that had enabled the country to not only eliminate various items from the waste stream, but also to earn valuable foreign exchange from exports.