NAIROBI, Jul 30 2012 (IPS) - Twelve years after a global campaign successfully advocated the cancellation of some of the world’s poorest countries’ public debt, developing economies are again facing unsustainable debt burdens. Only this time, it is the private sector’s debt in developing economies that is inflating dangerously. 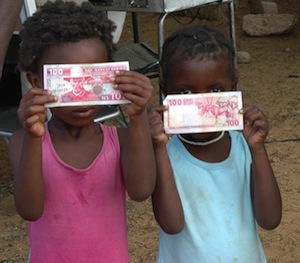 A recent report by the Jubilee Debt Campaign, a coalition of organisations supporting debt relief and increased transparency in global financial markets, highlights that foreign debt payments of the private sector in impoverished countries have increased from four percent of export earnings in 2000, to 10 percent on average in 2010.

“Some countries like Ethiopia, Niger or Mozambique continue to spend as much on debt service as before the rounds of debt cancellation in 2000,” Tim Jones, who authored the report, told IPS. The governments of El Salvador, the Philippines and Sri Lanka also continue to spend a quarter of government revenue on foreign debt payments.

Debt payments of the private sector are now double those of the public sector in many of the world’s most fragile economies, the ‘State of Debt’ report argues.

“Generally, public debt has decreased because of debt cancellation or better economic prospects, but the private sector has become dangerously indebted in many developing countries, threatening development achievements,” Jones explained. “Nothing has been done to prevent the build up of large debts in developing countries through a very liberalised global financial system,” he added.

Despite the international community agreeing to cancel up to 125 billion dollars for 33 countries since 2000 under the Heavily Indebted Poor Countries (HIPC) initiative, the International Monetary Fund and World Bank predictions foresee foreign debt payments in the least developed countries (LDCs) increasing by one-third over the next few years, the report argues.

The swelling of unsustainable debt, which has afflicted the South since the 1970s, is now causing panic in Europe as well. What is happening in Greece today mirrors what has been happening in the developing world, the Jubilee Debt Campaign argues, observing that history is repeating itself in a world where “lenders can go on lending with impunity and borrowers will always have to pay the price”.

The issue of unsustainable debt came to the world’s attention when Mexico first defaulted in August 1982. Mexico faced another debt crisis in the 1990s, followed by East Asia, Russia, Brazil, Turkey, and Argentina, due to excessive borrowing by the private sector.

The Campaign’s research estimates that “in the 1950s and 1960s, the number of governments defaulting on their debts averaged four every twenty years. Since the 1970s this has risen to four every year.”

“We now have a global financial crisis where people in the Western world are experiencing what many people across the global South have experienced for the last 30 years. It’s amazing how this ideology of liberalisation still holds so much sway,” Jones marveled.

“Some countries have tried to re-regulate international lending in recent years, like Brazil, which imposed a tax on short-term foreign money coming into the country; Iceland as well (whose entire banking system collapsed in 2008, the country’s three largest banks having accrued debt exceeding six times the national GDP) has had a very different response to the global financial crisis: its government refused to take on the banking sector’s foreign debt, largely because the people stood up and refused to do that. Iceland is now recovering far better than other countries from its debt crisis.”

“More countries have been backing regulations on how money flows in and out of their territory, but there are barriers in the system, such as World Trade Organisation (WTO) agreements,” Jones added.

Since 2000, 32 developing countries have qualified for debt relief, their debt payments reduced from an average of 20 percent of government revenue in 1998 to less than five percent in 2010, according to the report. In countries qualifying for debt cancellation, primary school enrolment has increased from 63 percent of children to 83 percent in ten years.

The Jubilee Debt Campaign has been advocating the creation of an international debt court able to cancel unsustainable debts, arguing, “Many developing countries have been, and continue to be, locked in a debtor’s prison.”

The increasing burden of debt is also strongly felt in developing countries that did not qualify for the HIPC scheme, such as Kenya.

“Loans and development financing must be tied to the national development agenda, otherwise we will end up with more useless, ‘white elephant’ projects that drain national resources,” he added.

Kenya’s public debt increased from 46.8 percent of GDP to 48.9 percent today, according to the Network.

“Borrowing makes economic sense, but the level of prudence should increase,” Kaara explained. “This is particularly worrying in countries where the political elite is the same as the economic elite; the appetite for increasing domestic debt benefits banks controlled by influential players, who profit from the private sector’s debt despite the obvious conflict of interest.”

At a national level, civil society is increasingly mobilising to have a stronger say on the level of debt incurred by governments. The Kenya Debt Relief Network has been drafting a ‘Responsible Borrowing Charter’ to gauge loans against the country’s macroeconomic indicators.

“The IMF has been seeking to create a new mandate on how to regulate the movements of money between countries, but it is still very weak,” Jones told IPS. “We are making the same mistake with the European debt crisis as with the Latin American debt crisis in the past, by thinking austerity is the answer, and it just creates further decline in the economy and suffering for the people on the ground.”