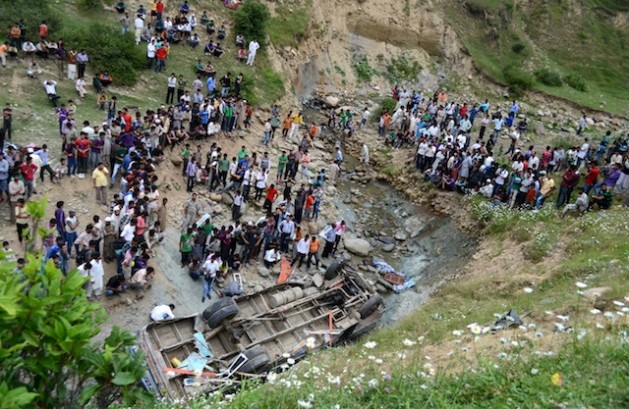 A passenger bus that fell into a deep gorge in Kashmir last week. Credit: Athar Parvaiz/IPS.

SRINAGAR, India, Aug 30 2012 (IPS) - The violence that killed thousands in Kashmir during the turbulent 1990s has eased; now killer roads are taking their toll.

“Daily police reports about road accidents present a horrible scenario; and almost every week we see newspaper headlines screaming about casualties being inflicted by road accidents across the Kashmir valley,” says Hameeda Nayeem, a civil rights activist who heads the Kashmir Centre for Social and Development Studies (KCSDS).

“Despite the recurrence of accidents, mostly because of bad roads and lack of proper traffic regulation measures, the government thinks nothing beyond the announcement of token relief for mishap victims,” she says.

The study also reveals that any accident in Jammu and Kashmir state has 64 percent chances of being “death prone”, the worst among Indian states on the basis of percentage of fatalities.

Early this year, Kashmir Chief Minister Omar Abdullah said in a written reply to a legislator that as many as 3,288 persons had been killed and 27,165 injured in 18,786 accidents in the state during the last three years.

The Sunder Committee headed by India’s former transport secretary S. Sunder has proposed higher penalties for offences like crossing the speed limit, driving without a licence, use of a mobile phone while driving, and not wearing seat belts.

The Committee has recommended fines ranging from 1,000 rupees (20 dollars) to 5000 rupees (100 dollars) plus imprisonment. At present traffic regulators either let such offenders go or impose a nominal fine of 100 rupees (two dollars).

This is despite the fact that traffic authorities blame rash and negligent driving for most deaths on Kashmir’s roads. “Overspeeding is the main cause of traffic accidents in the valley. Most drivers don’t care about the rules,” Kashmir’s superintendent of traffic police, Haseeb-ur-Rehman, tells IPS.

In 2010, Kashmir’s Traffic Department had planned to introduce traffic interceptor vans to be equipped with cameras and radar. “But the proposal didn’t receive a positive response.”

“The fatality of roads has been ignored, willfully or unintentionally for quite some time now,” says Bashir Manzar, editor of the English daily Kashmir Images. “Only a huge incident involving the death of dozens attracts attention.

“The response remains limited to statements and condolence messages, and then everything settles in and the vehicles go on killing people as usual.”

Manzar says the media are also to blame for highlighting only accidents which result in a heavy death toll, and remaining silent about the causes of the frequent incidents.

“The first culprits are the roads. There is hardly any road which can be termed perfectly fit and safe for driving. Because of our terrain, most of our roads are located in remote mountain areas. One would not mind the rough driving surface with potholes, but the there can be no compromise on safety at steep turns over deep ravines.”

According to Ashraf, the next culprits are the vehicles used for public transportation. “Most of these have outlived their utility and there is absolutely no physical check on the fitness of these vehicles.”

In a number of cases, he says, accidents have occurred due to failure of brakes or the steering mechanism. “Not only are these vehicles a direct danger to human life, they are also the greatest source of pollution.”

Kashmir’s junior minister for roads and buildings, Javaid Ahmad Dar, denies that the government is entirely responsible for the increasing frequency of road accidents. “We are trying our best to improve road safety and we are hopeful we will be able to bring down the number of road accidents and casualties,” Dar told IPS.