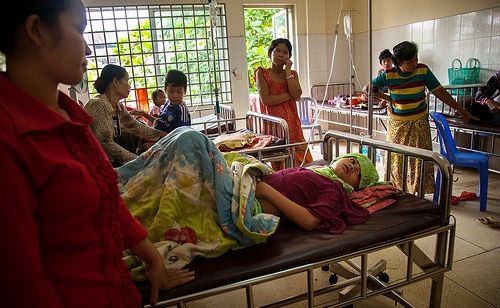 RIO DE JANEIRO, Sep 25 2012 (IPS) - Scientists in Brazil announced the start of experiments with an “innocuous, self-sustainable” method to fight transmission of the dengue virus by the Aedes aegypti mosquito, using a bacterium that is naturally occurring in nature.

“We are looking at the possibility of a control method that has a challenging objective: reducing and even eliminating dengue,” Paulo Gadelha, president of the state-run Oswaldo Cruz Foundation (Fiocruz), told the press during a recess in the 18th International Congress on Tropical Medicine and Malaria, running Sunday Sept. 23 to Thursday Sept. 27 in Rio de Janeiro.

Gadelha made the announcement Monday sitting alongside Scott O’Neill, head of the “Eliminate Dengue, Our Challenge” programme led by Monash University of Australia and financed by Fiocruz and the U.S. Foundation for the National Institutes of Health.

The strategy, already approved in Australia, Vietnam and Indonesia, will now be tested in Brazil, as soon as the health and environment agencies give their authorisation.

“This is an important method, because it could become one of the most promising weapons to fight dengue in a natural and sustainable manner, and it poses no risk to the human population or to nature,” Gadelha told IPS after the news briefing.

The technique is based on Wolbachia pipientis, an intracellular bacterium that naturally occurs in more than 70 percent of all insects, such as the fruit fly, butterflies, dragonflies, and several species of mosquito.

But Wolbachia cannot infect affect humans or other vertebrates.

O’Neill and Fiocruz scientist Luciano Moreira explained that after years of research, lab tests showed that when the bacterium is introduced in the Aedes aegypti mosquito, it acts as a vaccine, making the insect resistant to the virus that causes dengue fever – and thus keeping it from spreading the virus to people.

“After thousands of attempts over the space of a number of years, in Australia they managed to infect the eggs of the Aedes aegypti with the bacterium, through microinjections. Afterwards, the bacteria were found in the tissue of the mosquitoes,” Moreira said.

The method is based on the scheduled release of Aedes aegypti mosquitoes infected with Wolbachia which, when they breed with local mosquitoes, pass the bacteria on to the next generation through their eggs.

The idea is for most of the local mosquito population to gradually be infected with Wolbachia, and thus become incapable of spreading dengue, the researchers explained in a Fiocruz statement.

The Aedes aegypti mosquito transmits dengue fever by picking up the virus when it feeds on the blood of an infected person, and infecting other people when it bites them. The symptoms are fever, headache and muscle pain. But haemorrhagic dengue causes intense abdominal pain, nausea and bleeding under the skin and into mucous linings, and can be fatal. There is no vaccine.

Since 2011, the “Eliminate Dengue, Our Challenge” programme has been releasing Wolbachia-infected mosquitoes in different parts of northern Australia, where cases of dengue fever are frequent, although in much smaller numbers than in Brazil and other countries where dengue is endemic.

“Since they transmit Wolbachia from generation to generation through the eggs, and because they have an edge in breeding, with a better chance of leaving young, the mosquitoes carrying the bacteria became predominant in the local populations of Aedes aegypti in just a few weeks,” he added.

The method is considered “self-sustainable” and low-cost, because once the infected mosquitoes begin to be released, “the process does not have to be repeated,” Moreira said.

“The response we have today in Australia is that practically 100 percent of the Aedes aegypti mosquitoes are already producing infected mosquitoes, which indicates that there is a promising chance that the spread of dengue can be stopped,” Gadelha told IPS.

The hope is that Brazil will begin field trials in May 2014 at the latest. Before that, Fiocruz will breed mosquitoes in recipients, “in a contained manner,” to find out if what happened in Australia happens here as well.

It is important for local residents in the areas where the mosquitoes are released to take part in the process, and their participation is secured by getting them to sign a document agreeing to accept the experiment, Moreira said.

In response to questions from the reporters, the scientist clarified that neighbouring countries would also be consulted in case the experiment was expanded to border areas.

The tests will begin in Rio de Janeiro.

IPS asked Gadelha how the scientists could be sure that the mosquitoes inoculated with the Wolbachia bacteria would not cause harm to people in Brazil, given the different climate and biome here.

“The first element of proof is that Wolbachia naturally occurs in 70 percent of insects,” he said. “All of those hundreds of years of (natural) experience show that its spread has no damaging effect on nature or vertebrates, including humans.”

The president of Fiocruz also explained that this is because “Wolbachia only lives inside cells in the mosquitoes. Once the mosquito dies, the bacteria also disappear.”

In addition, “the bacterium is big enough to keep it from reaching the saliva of the mosquitoes, which is how it inoculates animals and human beings,” he said.

“The big advantage shown by the studies is that the presence of the bacteria in the
Aedes aegypti mosquito cuts its lifetime almost by half, while at the same time it keeps the dengue virus from surviving and spreading,” Gadelha said.

The secretary of health monitoring in Brazil’s health ministry, Jarbas Barbosa, said the method would be of “great significance” with respect to fighting a problem like dengue.

There are four subtypes of the virus, which is present in all tropical and many subtropical regions. Epidemics generally break out in the summer months, during or immediately after the rainy season.

According to the World Health Organisation, more than 2.5 billion people – over 40 percent of the world’s population – are now at risk from dengue, the most important viral disease in the world transmitted by mosquitoes.

In the last 50 years, the prevalence of dengue has increased by 30 times, and the WHO reports 50 to 100 million cases a year, in more than 100 countries. Half a million cases require hospitalisation, and about 2.5 percent of hospitalised patients die.

In Latin America and the Caribbean, 554,499 cases were reported in the first half of 2012, according to the Pan American Health Organisation.

The rise in the number of cases was facilitated by humanity itself, with the spread of mosquito breeding grounds, such as garbage dumps and water containers, Barbosa said.

He also said the new method would only be one of the tools used to fight dengue, stressing that the ministry would not stop investing in research along other lines, while continuing to carry out prevention campaigns and to adopt emergency measures when necessary.