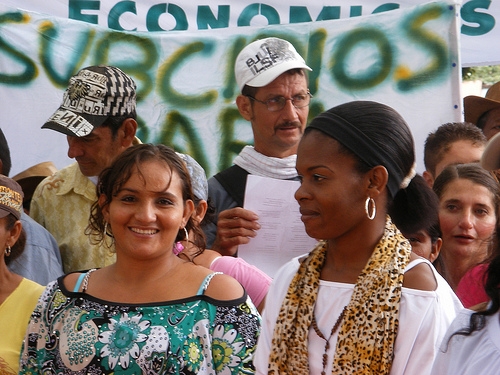 Peasant delegates at the Marcha Patriótica peace movement’s first public appearance, on Jul. 20, 2010 in the town of La Macarena, in the FARC’s zone of influence. Credit: Constanza Vieira/IPS

BOGOTA, Sep 13 2012 (IPS) - What are the obstacles to peace in war-torn Colombia? When government and rebel negotiators asked themselves this question, they concluded that one problem was that the media in this country had turned “peace” itself into a dirty word.

But Enrique Santos – the former owner of the leading daily newspaper, El Tiempo, older brother of President Juan Manuel Santos, and a key participant in the preliminary talks with the rebels – reportedly quipped: “That can be fixed in two weeks.”

IPS was told about the comment by a source close to the leftist Revolutionary Armed Forces of Colombia (FARC). Enrique Santos reportedly made his remark during the exploratory talks that began a year and a half ago and led to the president’s Aug. 27 announcement that formal peace talks would start in October.

“That assertion, if he really made it, is also a confession about how news is handled in a manipulative fashion,” journalist Arturo Guerrero told IPS.

Changing the mentality of the media “isn’t an easy task,” because “constant genuflexion before those in power is a characteristic of our press,” said Javier Darío Restrepo, a veteran reporter who heads the ethics department of the New Ibero-American Journalism Foundation (FNPI), founded by Colombian Nobel Literature Prize-winner Gabriel García Márquez.

Under the government of right-wing President Álvaro Uribe (2002-2010), the media were “totally obsequious,” he told IPS. “No one could raise any doubts about him being the Messiah, the man who was going to change the country.”

During the Uribe administration, the media, basing their reports almost exclusively on military sources, celebrated bombings of guerrilla camps and rebel casualties. And anyone who dared talk about peace risked ridicule and accusations of complicity with the FARC, the main rebel group, in arms since 1964.

By means of a constitutional reform, Uribe managed to be re-elected to a second term, although his bid for a third term was cut short by the Constitutional Court. “Little by little, the press left him behind, and now they criticise him more and more openly. Why? Because the ones in power have changed, now it’s Juan Manuel (Santos),” Restrepo said.

Since Aug. 27, headlines trumpeting the benefits of peace mushroomed overnight. All of a sudden peace has become more profitable than war, and studies have been published to demonstrate this.

“Santos is realistic” a guerrilla leader and negotiator who until recently was dubbed a “narco-terrorist” blares out from the front page of one newspaper. “Peace comes first” states the president of the Supreme Court, Javier Zapata Ortiz, on another. “The Pope encourages the peace process with the FARC” says a front-page headline the next day.

Restrepo said “there is a kind of worship of those in power. That is one of the most worrisome aspects of our press, because it keeps it from being effective in its analyses and in denouncing abuses of power.”

In 1999, a United Nations general assembly resolution, the “Declaration and Programme of Action on a Culture of Peace”, defined a “culture of peace” as “a set of values, attitudes, traditions, modes of behaviour, and ways of life…”

And article 7 of the Declaration states that “The educative and informative role of the media contributes to the promotion of a culture of peace.”

In order to usher in a culture of peace based on respect for life in Colombia, it is necessary “to work to change the mentality of journalists,” Restrepo said.

“Change has to do with training, and with incentives” such as prizes and praise, because “journalists love it when their work stands out,” added Restrepo, who said he imagines a kind of “ongoing campaign that would help the public learn how to distinguish what is going well and what has to improve.

“But above all, change has to do with journalists learning how to look at their own work with a critical eye,” he added.

Restrepo said it was “very difficult” to say when “the hatred propagated over the past decade will be appeased, because it will entail a change of attitude, which will require a long-term effort, in which the press has to be very involved.”

But it’s not a question of no longer reporting on “the barbarities being committed by the guerrillas, because this isn’t about achieving peace with our eyes closed,” he stressed.

What is needed, he clarified, is context; showing “how different countries that have experienced similar situations have resolved their problems, paying the price that is paid for peace.”

In his view, this “contextualisation” is not seen in certain newspapers, “because they are giving in to the primal instinct of ‘they are cheats, and how can we make peace with cheats?’ Well, it isn’t with friends that you make peace,” he said.

A country that is caught up in war for decades is repeating mistakes over and over again, he said. And the mistake made by the press is, “precisely, insisting on stirring up toxic memories, that poison people’s minds,” Restrepo said.

“It is the duty of journalists not to spread the poison,” but to report on these issues in such a way that “feelings turn into logic,” he argued.

Reality “is made up of many elements that, understood by readers, help them react intelligently instead of with knee-jerk reactions based purely on feelings,” he said.

The outlook has changed since late August.

The revelation that the government was holding exploratory talks with the FARC and that formal peace negotiations would begin in October in Oslo and would then continue in Havana took the media and pundits by surprise.

But for the past year, Congress has been debating legal reforms that now make sense in light of the announcement. The reforms would pardon war crimes committed by all of the parties involved in the decades-long armed conflict.

The projected reforms included the expansion of the jurisdiction of military tribunals; the creation of a legal framework for peace talks, that would benefit politicians and businesspersons with ties to the far-right paramilitaries; and an attempt at judicial reforms, already blocked by a civil society campaign waged by journalists and ordinary citizens over the Twitter social network.

Guerrero, a columnist with the El Colombiano newspaper who has helped raise awareness among journalists about the need for responsible coverage of the conflict, does not believe that public opinion “in today’s world of Internet” is as easily manipulated as Enrique Santos’s alleged remark would indicate.

“The absolute reign of the traditional media has noisily collapsed, because the social networks, blogs and the Internet in general have become a sixth continent, where these media no longer have an influence,” he said.

“That sixth continent is overwhelming…and many people are turning to it as a source of news,” he said. Meanwhile, “the large mass of people who do not follow the news and only find out what is going on every once in a while…are more susceptible to manipulation,” he added.

One decisive aspect is that “functional illiteracy is still high in the country, especially in rural areas,” Guerrero added. And that segment of the population also has “a quite rudimentary understanding of politics.”

In large cities, on the other hand, “what predominates is the conscious vote, and those sectors that have access to the Internet, that are the most educated, play a part in marking the horizon towards which the country is marching,” he said.