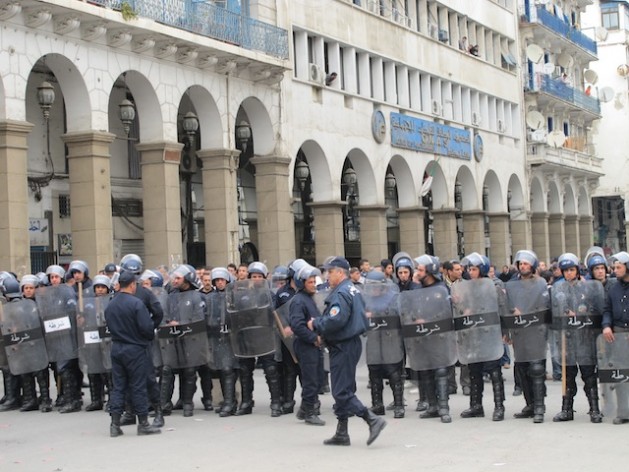 The police line up to quell a planned demonstration on Boulevard Amirouche in Algiers. Credit: Giuliana Sgrena/IPS.

ALGIERS, Oct 31 2012 (IPS) - As the Arab Spring continues to rage across the Middle East and North Africa, the gaze of the international media has largely passed over a country that was once known for its restive population, its long and bloody decolonisation struggle and revolutionary zeal.

Algeria has remained uncharacteristically quiet during the wave of popular uprisings in the region that began with the Tunisian revolution in December 2010, with many spectators questioning if or when the country will explode in its own brand of protest against the ruling powers.

But the chances that Algerians will take to the streets are slim, mostly because memories of the ‘black decade’, during which close to 200,000 Algerians lost their lives in the crossfire between warring Islamist groups, are still fresh in survivors’ minds.

“We no longer want to be considered terrorists the way we were in the past,” Amir Moussawi, a 22-year-old student at the International Commerce Institute, told IPS.

Hailing from the city of Blida, just 40 kilometres from the capital Algiers, Amir has good reason to fear political upheaval. During the period of terror in the 1990s, Blida was the stronghold of the Armed Islamist Group (GIA), responsible for killing tens of thousands of Algerians between 1992 and 1999.

In 2005, an amnesty law implemented by the newly elected government of Abdelaziz Bouteflika freed most of the former Islamist militants, in a bid to reduce violence between the warring sides. The law also absolved the army – which was also accused of killing, torturing and ‘disappearing’ countless thousands – of blame.

As a result, thousands responsible for the massacre are still at large and were never made to repent for their crimes.

“The majority of the radical Islamists are no longer engaged in politics,” Samira Ababsa, a young primary-school teacher in Algiers, told IPS.

“They emerged from ‘underground’ or from jail with a ‘war chest’, money stolen during ten years of terrorism that involved (besides widespread rape and murder) the looting of victims’ homes.

“So now they have their own businesses, they built villas, and shopping centres. But this does not mean the political mindset has changed,” she added.

After the referendum and approval of amnesty in 2005, Salafist groups continued to fight and the majority of them joined the al-Qaeda in the Islamic Maghreb (AQIM). Ali Belhhadj, one of the two most powerful players in the Islamic Salvation Front in the 1990s, is considered a leader of the active Salafist groups in Algeria today.

Amir and Samira were youngsters during the reign of terror, but have vivid memories of that time.

“I remember how terrified my family was. (Sometimes) we could not even leave the house,” Samira recalled.

The son of a military official, speaking under strict condition of anonymity, told IPS that women were at risk of igniting the wrath of Islamists and young men were in danger of either being recruited by armed groups or being killed if they were suspected of having loyalties to the army.

All these young people agreed that they did not live normal lives during that decade. No part of the country, nor any time of day, was safe: attacks began after dark in villages, but took place in broad daylight in the cities.

This long nightmare, which ended with perpetrators being pardoned for their crimes and left to walk among family members of their victims, could explain why many people in this country of 29 million seem to be “vaccinated against protest and demonstrations,” Cherifa Kheddar, president of an associations of relatives of terror victims known as ‘Djazairouna’ (Our Algeria), told IPS.

Another reason for the relative quiet on the Algerian front could be the stability of the economic situation compared to other countries in the region. Though by no means free of inequality, Algeria has managed to remain buoyant throughout the global recession.

Hydrocarbons are still the backbone of the economy, accounting for 70 percent of national gross domestic product (roughly 71.4 billion dollars) and 98 percent of the total volume of exports in 2011, according to www.africaneconomicoutlook.org figures.

Revenue from the sale of hydrocarbons brought reserves of foreign currency up to 182.2 billion dollars in 2012.

Though production in the oil and gas sectors continues to decline, dropping from 43.2 million tonnes to 32 million tonnes between 2007 and 2011, prices have increased steadily.

The Algerian economy grew by 2.6 percent in 2011. At the exact moment when masses demanding an end to economic stagnation were pouring onto the streets in neighbouring countries like Egypt and Tunisia, the Algerian government was raising salaries and providing housing subsidies to the poor.

Algeria also has a relatively ‘open’ civil society compared to other countries in the region. There is significant space for political debate, Amir told IPS, with students, bloggers and facebook users utilising the web to exchange information about the current political climate without much intervention by the authorities.

Still, the country is not without its share of problems.

The overall unemployment rate was 10 percent in 2011, while unemployment among the 15 to 24 year-old age group topped 21.5 percent during the same time period.

Back in 2006, the last time official data was collated, the poverty rate was 23 percent.

Corruption is rife in every layer of governance, from state to local administrations, and in public and private companies. According to Transparency International’s Corruption Perceptions Index for 2011, Algeria ranked 112 on a list of 183 countries.

Algerians do not take these injustices lightly. Various groups and organisations attempting to organise protests against the government have been suppressed by the security apparatus, which consists of close to 500,000 forces spread out between the army, police units and the gendarmerie.

With most of the population still haunted by the ghosts of the past, it is unlikely that they will venture into open confrontations with the armed forces or risk opening another blood-soaked chapter in the country’s history.

“We don’t want to go back to the 1990s and even if we would like to fight against corruption, for justice, freedom and democracy, Algerians are still traumatised, we need more time to overcome the effect of ten years of violence,” Cherifa Salhi, a psychology professor at the University of Algiers specialising in treating women victims of violence, told IPS.