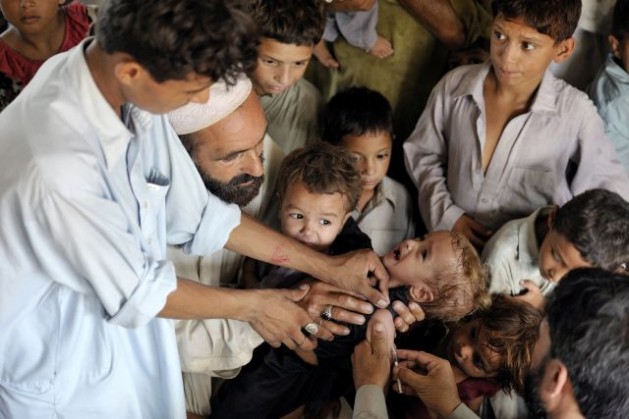 A child grimaces as he receives a measles vaccination at a school in Charsarda District in Pakistan's northwestern Khyber-Pakhtunkhwa Province in 2010. Credit: UN Photo/UNICEF/ZAK

UNITED NATIONS, Oct 9 2012 (IPS) - Pakistan, where some 126,000 children under five years old die from pneumonia every year, launched a new pneumococcal vaccine Tuesday, making it the first South Asian country to do so.

Pneumonia is the most common killer of children under five, and 99 percent of these deaths occur in developing countries, according to the World Health Organization (WHO).

Some 1.4 million children under the age of five die each year of pneumonia – more than child deaths by HIV/AIDS, tuburculosis, and malaria combined. And 550,000 of these deaths occur in South Asia alone, according to the United Nations children’s agency UNICEF.

The Global Alliance for Vaccines and Immunisation (GAVI), of which UNICEF and WHO are members, will bear 95 percent of the immunisation costs in order to bring the pneumococcal vaccine into Pakistan’s Expanded Progamme on Immunisation (EPI).

The EPI already includes several vaccinations, including those against polio, meningitis, and childhood tuberculosis, but has until now lacked the badly needed pneumococcal vaccine due to its considerable expense.

In an interview with IPS, Dr. Seth Berkley, CEO of the GAVI Alliance, said, “Historically, the delay between a vaccine being made available in the West and its availability in the east is 10, 15, (or possibly) 20 years.”

Pneumococcal, a vaccine that has been in existence for many years, is only recently conjugated into an inoculation safe for infants.

“When it came out of the West it was expensive,” Berkley said, “and the reason is that it is actually a collection of 10 or 13 vaccines (depending on which of the two products that are being used now) and it was a very complex, difficult to manufacture vaccine.”

The developing world was introduced to the vaccine only one and a half years after its introduction to the Western world, closing the usual gap by at least a decade. This is due to GAVI’s innovative Advance Market Commitment (AMC), an initiative that offered incentive to the vaccine manufacturers to produce large quantities of the pneumococcal at lower costs.

“AMC basically put out a programme to encourage manufacturers to make a vaccine that would contain the appropriate strains for the developing world,” said Berkley, “as well as having a better price point. That was the big innovation that occurred.”

In most countries, the poorest and most deprived children are likely to die before their fifth birthday.

“Coverage of key prevention should be higher among these children,” said UNICEF in a report published in early June of this year, “but too often the opposite occurs.”

In developing countries such as Pakistan, air and water pollution, overcrowding, and most importantly, lack of access to medical facilities all contribute to the enormous death toll by treatable and preventable illnesses.

The GAVI Alliance has called for “equity approach”. The concept is to treat children under the age of five in the lowest 20 percent of the economy in the same way as the top 20 percent of households are treated.

“Our long-term goal is to get it (the vaccination) to every child possible, especially because we know that the children who are stigmatised or who are in the poorer districts not only have higher incidence of disease because of living conditions, but also have less access to treatment,” Berkley told IPS.

He explained the strategy to accomplish this is to continue working with governments, NGOs and others to distribute the vaccine as widely as possible, despite the challenge of Pakistan’s wide gap between the rich and poor districts.

“It’s unlikely that the coverage in those places are as good as the places that have easy access,” said Berkley, “but on the other hand we don’t ignore them either. We try to do everything we can to get vaccines to them.”

GAVI’s financial support in the developing world comes in two parts: the financial backing to provide the vaccines themselves and the training needed to administer them, and the funding to improve the actual health system of the country in order to increase the functioning of the immunisation programmes.

Berkley explained that, in order for this these programmes to sustain themselves, there must be a visible price drop of vaccination costs, and the countries getting support from GAVI must begin to increase their payments as the economy improves.

Pakistan, for example, currently pays 20 cents per dose. Over time, as the economy begins to support itself, it will increase its payment to the full 3.50 dollars per dose, unless the price per dose has dropped by that time, as GAVI hopes and expects. AMC has already established that the price of each dose will not increase from 3.50 dollars.

“Above all, we must not lose sight of the heavy infant and child mortality burden facing Pakistan’s families,” said Dr. Guido Sabatinelli, WHO representative in Pakistan. “The introduction of the pneumococcal vaccine represents an important milestone in the fight to reduce this burden.”