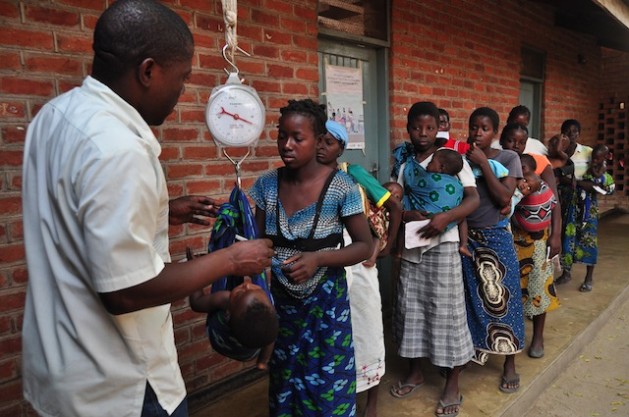 CHIKHWAWA, Malawi, Sep 15 2012 (IPS) - Three-month-old Simplicious Gift lives in Mafunga village in Malawi’s southern rural district of Chikhwawa, 48 kilometres from the commercial capital, Blantyre. His is a poor farming village of about 1,200 people who live off their harvests and the produce from their livestock of goats, pigs and cows.

While a large portion of the population in this region may be facing food insecurity this year because of poor harvests, whatever the situation, Simplicious will not go wanting for health care.

Whenever her young son is in need of medical treatment, Margaret Gift has only to walk 300 metres to her nearest medical clinic.

“I come here whenever my child has a fever, diarrhoea or a cough. I also come for family planning methods,” she told IPS as she waited at the local village clinic.

In this southern African nation, where 90 percent of the population are impoverished rural subsistence farmers with limited access to transport, the average distance to a district hospital is 21 kilometres, according to a December 2011 report on the country’s medical facilities in the East and Central African Journal of Surgery. In Tanzania the average distance is 31 kms, while the average in sub-Saharan Africa is eight, according to Every Mother Counts, a platform that links grassroots mobilisation campaigns with the steps of “engagement, education, and advocacy.”

But the growing presence of rural health centres and the introduction of community health workers in Malawi over the last 30 years has resulted in a 64 percent reduction of under-five mortality rates in the country over the last 10 years, according to the United Nations Children’s Fund (UNICEF). In 1990 the country recorded 227 deaths per 1,000 live births. The number was reduced to 83 deaths per 1,000 live births in 2011.

A UNICEF report released on Sep. 13 “Committing to Child Survival: A Promise Renewed”, says the number of children under the age of five dying in sub-Saharan Africa has been reduced by 39 percent, while globally it has been reduced from nearly 12 million in 1992 to 6.9 million in 2011.

The report noted that Malawi is only one of nine low-income countries worldwide to have reduced their under-five mortality rate by more than 60 percent.

In the Chikwawa district there are 12 health centres that serve the region’s approximate 350,000 people. Makhwira Health Centre provides health services to about 58,755 people.

Kennedy Thala, a senior Health Surveillance Assistant (HSA) or community health worker at the centre, told IPS that the introduction of Early Infant Diagnosis in 2010 has reduced the number of child deaths here.

“When it was first launched we had 229 infants, of which only three died between the months of July and September 2010 while waiting for their HIV and malnutrition results from the Central Lab in Blantyre. Before that, children were dying at a much higher rate. But unfortunately we don’t have the data because there were no records,” she said.

She added that the introduction of the UNICEF Rapid SMS programme in 2010 also reduced the under-five mortality rate.

“We get text messages with the results of children who were tested for HIV, usually after three to four weeks,” she said. Previously it would take months for the health centre to receive the results.

Babies here are also enrolled in the Growth Monitoring Programme, a project that runs together with the Out-Patient Therapeutic Programme, where babies with moderate malnutrition are given ready-to-use therapeutic food such as plumpy’nut (fortified peanut butter) and corn-blend soy flour mixed with cooking oil, medication and vitamins.

In this region, as across the rest of the country, HSAs conduct clinics in local villages daily. In addition, the community health care workers visit health centres twice a week to assist with child immunisations, antenatal care, and HIV counselling and testing services.

“We believe that through these programmes mothers are receiving first-hand information on what is expected of them in as far as the reduction of malnutrition amongst under fives is concerned,” said UNICEF Malawi Chief of Communications, Victor Chinyama.

UNICEF officials say it has been very important to take health care services closer to where people live, thereby significantly reducing the distance that people have to travel to access medical treatment in Malawi.

“In Malawi, many district hospitals are very far from most villages, which previously forced many mothers to walk very long distances. But now people can get medical care right where they are, and mothers seeking child healthcare can access it right away,” said Chinyama.

Spokesperson for the Ministry of Health, Henry Chimbali, told IPS that the reduction in under-five mortality rates was “a remarkable achievement for us because it shows that what we are doing is working.”

“We are mainly attributing this success to the Safe Motherhood project, the village clinics and also to the HSAs who are directly working with mothers right in their communities to help prevent deaths that could be avoided amongst children,” he said.

Dr. Queen Dube, a paediatrician at the Queen Elizabeth Central hospital in Blantyre – a 950-bed facility with patients mostly from rural areas or townships, told IPS that the reduction of deaths in children under five due to malnourishment could also be attributed to the improved access to food supply in the country since 2005.

“I was here when there were over one hundred children in the Nutrition Rehabilitation Unit. But now you go there it’s not even full – there are only 16 children there – to us that’s amazing!

Dube also said that the introduction of the Extended Programme of Immunization for children under five, which started in the early 1960s countrywide, helped reduce mortality rates.

“At the moment our coverage nationwide is at 90 percent. Though there is still more to be done in the area of pneumonia, but since last year babies are now being vaccinated against the disease. In addition, many pregnant women are now attending antenatal care at least once – at the moment countrywide attendance is at 91 percent,” she said.

Dube, however, told IPS that neonatal mortality remains a big challenge for Malawi as it contributes to nearly a third of all under-five deaths. Current statistics indicate that 79 infants under 12 months of age die each year out of every 1, 000 live births. The current global neonatal rate, according to the UNICEF report, is 22 deaths per 1,000 live births.

“Basically, neonates get sick within the first 72 hours of life and they mostly die due to low-birth weight. Such deaths remain unchanged in Malawi, the numbers are still high,” she said.