WASHINGTON, Oct 10 2012 (IPS) - Rising corn prices in the United States brought about by biofuel mandates have cost developing countries 6.6 billion dollars over the past six years, according to new research released here on Wednesday.

The subsequent increase in food costs has drastically affected levels of world hunger and, in some countries, political stability, according to the report, published by the global watchdog ActionAid. The report also warned of the consequences of current U.S. policies.

“What this report really highlights is our inability to keep up with the current demands of corn for food and fuel – and most certainly future demands,” Kristen Sundell, a policy analyst at ActionAid USA, told journalists Wednesday. 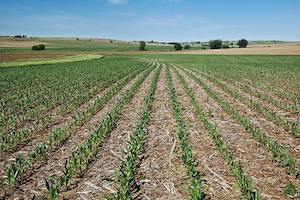 Corn prices in the United States have steadily increased since 2007, when new legislation known as the Renewable Fuel Standard began requiring the use of a percentage of corn in the production of a biofuel called ethanol. Today, ethanol is added to petrol across the country.

According to the report, 40 percent of all U.S.-grown corn is now being used to fulfil these ethanol mandates – up from just five percent a decade ago. And because 40 percent of all U.S.-grown corn translates to 15 percent of global corn production, corn prices have increased by 21 percent over the past six years. That increase has cost the global economy 11.6 billion dollars, 6.6 billion of which fell on developing countries.

This year, the situation in the United States has been exacerbated by the worst drought in fifty years, which resulted in a harvest about 20 percent smaller than expected. Even so, the Renewable Fuel Standard requirements have not changed.

Unfortunate weather circumstances in the United States will only add to the burden felt by developing countries importing U.S.-grown food, Sundell said. “Our ethanol policy cannot be based on a prayer for good weather,” she warned.

Mexico and Egypt have reportedly suffered the highest costs. Over the past six years, the Mexican government has paid an extra 1.1 billion dollars to import corn, and Egypt, 727 million dollars.

Guatemala, which is particularly dependent on corn imports, paid 28 million dollars in 2010 alone, or more than 10 percent of the Guatemalan government’s annual expenditures on agricultural development. That was also six times the amount of U.S. agriculture aid received and almost equalled the amount of food aid that Washington gave to Guatemala.

Nearly half of children under five in Guatemala reportedly suffer from malnutrition.

Even developing countries that grow enough corn to export it are feeling the effects of the U.S. biofuel mandates. Uganda, for instance, has seen a small net gain in its corn exports, but the majority of its population is still seeing a spike in corn prices due to global demand.

“To the extent international prices transmit to Ugandan markets, U.S. ethanol expansion is contributing quite directly to food insecurity among the urban poor, even in a net corn exporting country,” the ActionAid report concluded.

Grain and fuel are not the only staples affected by these biofuel mandates. The U.S. meat industry is suffering from steep feed prices as well. American farmers have been forced to slaughter cattle and poultry they cannot afford to feed. Analysts warn that these actions will affect prices for eggs, dairy products and meat well into next year at least.

“In the last two years, we have seen a one-billion-dollar increase in the two major feed ingredients in the turkey industry,” Damon Wells, with the U.S. National Turkey Federation, said Wednesday. “The U.S. is world’s largest poultry exporter, and any price increase of this level is going to be felt around the world.” Government forecasters have predicted up to a 4.5 percent increase in poultry prices next year.

Still, ActionAid’s researchers stress that such staggering increases to U.S. corn prices should be preventable in the future. In November, for instance, the Environmental Protection Agency (EPA), the governing body over these biofuel mandates, will rule on whether or not to grant a waiver for the Renewable Fuel Standards. Such a waiver would decrease the amount of corn being used to make ethanol and lead to lower corn prices.

“Putting a shock into the system will reduce the food costs here in the U.S.,” Wise said. “The ripple of such a shock will be felt around the world – everyone feels the impact of American prices.”