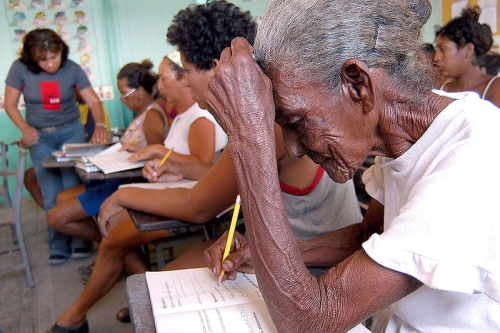 An 85-year-old woman learning how to read in Isla Borracha, Anzoátegui in 2004 thanks to the Venezuelan government’s literacy drive. Credit: Franklin Reyes/J.Rebelde CC BY 2.0

CARACAS, Oct 3 2012 (IPS) - Whoever wins Venezuela’s presidential elections on Sunday Oct. 7 will do so as a result of the idea of social inclusion, which has become dominant in an electorate whose social and political features have changed radically in the last decade.

“People have changed and now they want to participate and get involved in public debate; they have matured as citizens and in democratic terms, in a political renewal that is seen above all in the popular sectors,” said Oscar Schémel, the head of the Hinterlaces polling firm that predicts the reelection of President Hugo Chávez.

“Revaluing social inclusion and the social programmes, and fostering the belief that he will put into effect promises that were not fulfilled due to the government’s inefficiency allow Henrique Capriles to benefit from the support of a cross-section of all social levels of the electorate,” said Saúl Cabrera, vice president of a polling company that predicts a victory for the opposition candidate, Capriles.

Chávez won the 1998 elections riding on the demise of the two-party model that had governed Venezuela since 1959, said Manuel Felipe Sierra, an analyst of the traditional left. “Now a counter-power has emerged, a new generation that has taken up the value of inclusion, interest in the public good and the social equity programmes,” said Sierra, a critic of Chávez, who has been in power since 1999.

Capriles, a 40-year-old lawyer, entered politics as a lawmaker when Chávez first took office as president, and his candidacy unites the opposition from left to right. He is not offering a modification of the current model, but what he calls “a rectification,” to make it more efficient, conciliatory and democratic, said analysts consulted by IPS.

“There is majority support for social inclusion, and that explains the support for the president, in spite of the discontent with his administration,” said Schémel.

He said “Capriles’ basic offer is to continue the model, but more efficiently,” and that his firm’s studies show that “he is not a threat to the model of inclusion and social programmes.”

Capriles does not generate rejection, he said, “but neither is he a convincing candidate, as he is seen as a technocrat.”

In a poll carried out by Hinterlaces between Sept. 10 and 22, six out of 10 respondents said Chávez’s “Bolivarian revolution had helped Venezuela.” On this basis, the president would be reelected with a margin of at least nine to 12 percent, although Capriles is narrowing the gap in the polls.

At campaign rallies on the weekend prior to the election, Chávez countered accusations of inefficient administration by stating these problems should not confuse the electorate.

It is understandable that there are people who are discontented "because of the shortcomings of our government," he said, adding that correcting these problems would be his priority after Jan. 10, when the new six-year presidential term of office starts.

But on Oct. 7, the main thing is not that "the street was not paved, I didn't have electricity, the water was cut off, I did not get a job, I wasn't given a house.

"What is at stake is much more than this," he said. "The life of the country is at stake," and social justice, "which will not happen without the revolution."

In these elections, the government “is not facing a diehard rightwing opposition or capitalism or the empire, but an alternative that, while not ideologically compatible with Chávez’s discourse, is not entirely opposed,” he said.

In his campaign, Chávez describes Capriles as a member of the haut bourgeoisie, pointing to his well-to-do family’s business interests, “fronting” for the empire (the United States) and the traditional political leadership. He makes his supporters and ministers call Capriles “el majunche,” a slang insult meaning roughly “of little account.”

Capriles served two terms as mayor of a municipality in Caracas and afterwards became governor of the northwestern state of Miranda, a social and economic microcosm of the country. He defines himself as progressive and centre-left, and says his government would be modelled after that of former Brazilian president Luiz Inácio Lula da Silva (2003-2011).

On Monday Oct. 1, Capriles told foreign correspondents that the president had awakened “great hopes among the people for the end of social exclusion,” but had then betrayed these hopes with poor administration and corruption.

He also said that “those who have not reflected on and learned from what has happened in this country since 1998, and want to return to the past, have understood nothing,” and he repeated that if he is elected, he will strengthen the so-called social missions promoted by Chávez since 2004, even giving them legal standing.

The missions are programmes created to reduce the high levels of poverty in this oil-rich country. They include nutritional, health, educational, employment and housing plans.

These social programmes consolidated “a religious connection” between the poor and the president, and “turned Chavismo into a civil-military culture,” Schémel said.

According to official figures, between 1999 and 2010 the poverty rate plunged from 49 to 28 percent in this country of nearly 30 million people.

Capriles’ candidacy is supported by a heterogeneous mix of traditional parties, neo-rightwing groups, former guerrilla groups, progressive fronts with regional leaders, and personalities that have seceded from Chavismo.

Cabrera said that “the excitement is on Capriles’ side,” manifested in mass rallies, and is due to the candidate’s having broken with “the class struggle concept that Chávez relied on for his electoral victories after 1998.” He said the president “leverages the full weight of the state, but does not rule the street.”

Furthermore, he said, Capriles has concrete works to show, especially his social programmes in Miranda, where part of Caracas is located, such as his “Zero Hunger” plan, and his effective responses to natural disasters.

Cabrera’s polling firm, Consultores 21, was the first to tip Capriles to win in a “very tight” contest. Their poll published in the last week of September attributes 48.9 percent of voter intentions to Capriles, compared with 45.7 percent for Chávez.

Three other polls released on Sunday Sept. 30, the last day they could be published, favoured Capriles with up to 53 percent of voter intentions, although most firms predicted that Chávez would win, but with a much narrower gap between the candidates.

Another factor, said Cabrera, is that Chávez managed to offer something new in each of the previous elections. “But after 13 years, he has nothing new left to offer,” he said.

The 58-year-old president’s struggle with cancer since last year has also affected the campaign, although it has been underplayed, Cabrera said.

“Images of Chávez looking tired and puffy, with bags under his eyes,” are in contrast with “the electorate’s ideal image of him,” he said.