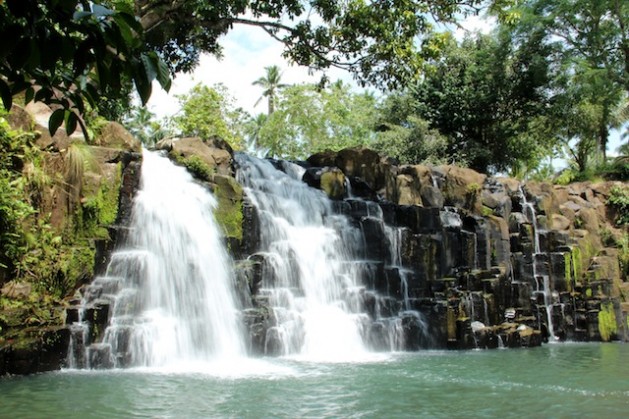 The majestic Bulingan Falls in Basilan, one of the undiscovered tourist spots in Muslim Mindanao. Credit: Kara Santos/IPS

MANILA, Nov 21 2012 (IPS) - International travellers may soon get to enjoy the scenic spots and rich cultural heritage of Muslim Mindanao, the Philippines’ southernmost island group, without the threat of being caught in the crossfire of the region’s conflict.

A four-decade-long Muslim insurgency, which has killed and wounded an estimated 120,000 people and stifled the development of a large part of Mindanao, may be soon coming to an end.

Since the Moro rebellion broke out in the 1970s – fuelled by a lack of national representation and decades of economic neglect of the majority Muslim region – some areas of Mindanao have been off-limits to visitors because of the “high threat from terrorism” and ongoing clashes between the military and insurgent groups.

But all that is expected to change in the coming years.

Nassreena Sampaco-Baddiri, regional secretary of the Department of Tourism in the Autonomous Region in Muslim Mindanao (ARMM), said the area, home to a population of over 3.2 million people, is blessed with white sand beaches, serene waterfalls and majestic lakes.

During a multi-sector forum on tourism, Baddiri presented her vision for “sustainable community-based tourism development (that) generates economic benefits.”

“The main barrier to development in the past several decades, the conflict situation, will be addressed,” Baddiri told IPS.

Baddiri is optimistic that the signing of the Framework Agreement on the Bangsamoro in October will have “a huge impact on tourism development in Muslim Mindanao”.

“This framework agreement… means that hands that once held rifles will be put to use tilling land, selling produce, manning work stations, and opening doorways of opportunity for other citizens,” President Benigno Aquino III said, on signing the agreement.

The National Statistical Coordination Board says that ARMM posted one of the highest poverty rates from 2003 to 2009.

According to the 2009 United Nations Development Programme (UNDP) human development report for the Philippines, the five provinces of ARMM – Lanao del Sur, Basilan, Maguindanao, Tawi Tawi and Sulu – ranked at the very bottom of the UNDP’s Human Development Index.

Supporters of the peace agreement say that income from tourism can go a long way to lifting thousands out of poverty.

Travellers who have visited the island provinces of Basilan, Sulu and Tawi-Tawi say that many of the attractive destinations here have remained largely off the tourist radar.

“These provinces take pride in some of the most unspoiled…beaches, lush marine sanctuaries and dive sites, as well as enchanting waterfalls, which remain unexplored because of the perceived danger,” Bernard Supetran, a freelance travel writer and editor for EZ Maps, the leading mapmaker in the country, told IPS.

“These provinces are also cradles of colourful indigenous cultures and ways of life that have been preserved (during the last four decades),” he added.

Tourism stakeholders from the five provinces of ARMM met last September to discuss a tourism road map in the hopes that peace will spur investment in various industries such as transportation, hotels and restaurants.

“The multiplier effect of peace and tourism development will contribute to higher household incomes and empowered communities,” Baddiri told IPS.

In a region where 70 percent of workers earn only 2.40 dollars per day from agriculture and fishing, tourism could lift thousands out of poverty.

Baddiri says that local communities have been identified as primary stakeholders in any development project that might take place.

“What is unique to the region are the rich traditional and indigenous performing, visual and culinary arts based on the Maranao, Maguindanao, Iranun, Yakan, Tausug, Sama cultures among others,” she said.

However, Benedict Bacani, executive director of the Institute for Autonomy and Governance (IAG), warns that the Framework will “not by itself bring in social and economic development and tourism in the region”.

“The Framework is just the first stage in a series of steps to stabilise security and build the environment conducive to investment and tourism, ” Bacani told IPS.

The government has set an official target of 10 million tourist arrivals by 2016. Local government and private sector stakeholders from the five provinces of Muslim Mindanao hope that many of those travellers will also visit the region, which now faces an uphill climb in shedding its image as a haven of violence.

“Since most of the news about Mindanao is related to violence, people perceive that to be true,” lamented YPMN’s Kasim, claiming that positive developments and initiatives were often ignored in favour of reports on bombings and a rising death toll.

But Tomawis remains optimistic that Mindanao “will have a place on the tourism map once it overcomes misconceptions”.