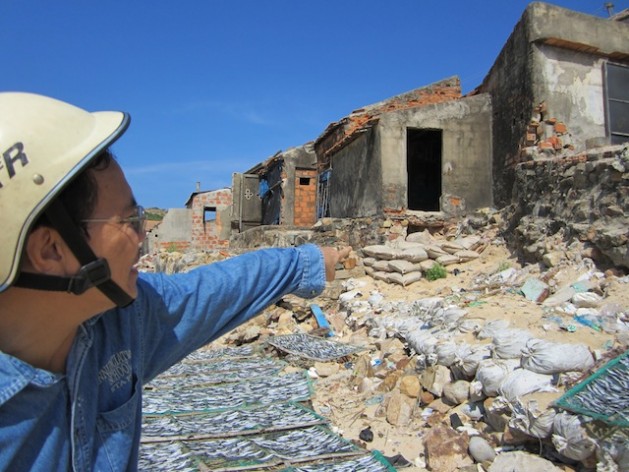 AN BIEN, Vietnam, Nov 25 2012 (IPS) - For the last decade, many families in this southwestern Vietnamese province have been uprooted at least once every two years – but this is not due to economic or political upheaval.

Rather, extreme weather has forcibly turned many of these coast-dwellers into unwilling travellers, as raging storms and a rising sea level lead to continued loss of land – and home.

“Each year, sea waves have eroded about three to four metres of land,” says a 47- year-old fisher from the Tay Yen commune. “Our family had to move five times, (and) now our house is four metres from the sea.”

But this is obviously not far enough. Already, the floors of the house are wet with seawater and a tree standing in what was once the fisherman’s front yard has now become the marker for his casting point.

The fisherman, who has lived in this commune for the last 20 years, says he would have pulled up stakes and moved on once more if only he had money.

He finds no comfort in the fact that throughout Vietnam’s many other coastal communities, and even in the Mekong Delta, thousands of others are suffering the same plight.

Vietnam has long been subject to typhoons that would typically lash the central coast and the Mekong River Delta. But in the last several years those typhoons have become even more intense and, accompanied by a rising sea level, have put coastal areas and communities in the Mekong Delta at great risk.

It also noted that Vietnam “may be one of the top five countries in the world likely to be most affected by sea level rise”, adding that records already show a sea level increase of about three millimeters annually from 1993 to 2008.

The report lists coastal erosion among the effects of these changes, with some areas already experiencing erosion of about five to 10 metres a year, while others are suffering erosion of as much as one kilometre annually. Increased salinity of coastal aquifers and inundation can also be expected from significant sea level rise, it warned.

Many areas in Kien Giang, located about 250 kilometres from Ho Chi Min City, are actually experiencing erosion of 25 metres a year, and experts estimate that as much as one-third of Kien Giang’s coast has been lost to landslides.

That erosion has destroyed vast swathes of this southwestern province’s famed mangrove forests, leading one provincial environmental official to lament, “Forest belts have been lost.”

Officials from Binh Dinh province in south-central Vietnam are equally worried about continuing erosion there.

“Every year, at least two to three rows of houses were washed away (about 80 to 90 houses),” says Do Van Sang, director of the province’s Centre for Land Development, which oversees reallocation and resettlement for households in the high-risk and affected areas in Binh Dinh.

“Local resistance efforts and local people could not keep up.”

Meanwhile, Pham Van Hung, chairman of the people’s committee of one of the coastal communes in Bin Dinh, points to increasingly vicious storms as the primary cause of property damage or outright loss.

Other experts have cited the decimation of mangrove forests as a reason for increased damages.

Le Thi Huong, who has lived near the Mai Huong estuary in Kien Giang for three decades now, says that in the past, the mangrove forest in front of her house was as far as three kilometres from the coast. But now she estimates that the sea is just a few hundred metres away from the forest – or what’s left of it, anyway.

Most of the forest’s big trees are already gone. “Now, because of erosion, more trees are falling and dying,” says Huong.

Still, some see hope in mangrove-restoration projects, including one that is currently being rolled out in Kien Giang.

At Vam Ray hamlet in Kien Giang’s Hon Dat District, a 400-metre mangrove forest, part of a pilot programme by the German Society for International Cooperation (GIZ), has been thriving.

Mangrove forests have long been seen as an effective method of erosion-reduction. GIZ says that a mangrove forest “can reduce wave energy from 50 to 67 percent”.

The GIZ project is not the first of its kind in Kien Giang. The national government has been implementing mangrove reforestation projects here for the last 10 years. Its success rate, however, has been a discouraging 50 percent.

To ensure better results for its project, GIZ decided to concentrate on controlling two factors: waves and sludge. Nguyen Huu Hoa, head of agriculture and rural development in Kien Giang’s An Bien district, believes that the GIZ project could be replicated and “the local people can do it by themselves”.

But this approach has elicited a fair amount of debate.

Some experts have said the GIZ project may be difficult to replicate because of the costs, which, according to Kien Giang Science and Technology Department Deputy Director Phung Van Thanh, “are higher than the permitted state cost level”.

He also worries that it may not be applicable in areas with serious erosion in the province, pointing out that the GIZ site experiences just 10-metre erosion annually, not even half as extreme as the levels in many areas in Kien Giang.

Dr. Le An Tuan of the Research Institute for Climate Change at Can Tho University worries about the long-term impact of such projects. The GIZ’s narrow four-hectare mangrove forests have low resistance to the more intense storms these days, he says.

Additionally, the project could give a false sense of security to residents living in the mangrove project area – such as the 300,000 living within the parameters of GIZ Kien Giang project – and draw more settlers into a vulnerable location.

*This story, also published as a set of stories on the Hanoi Radio and Television online site, was produced as part of IPS Asia-Pacific’s ‘Climate Change: A Reporting Lens from Asia’ series.