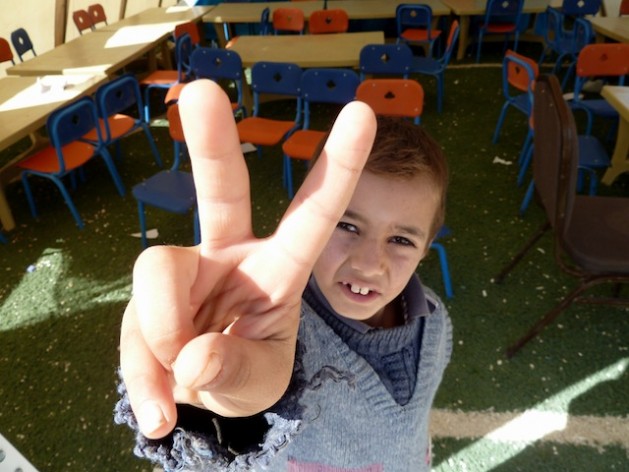 A Syrian child in a makeshift school at the Za’atari refugee camp in Jordan. Credit: Robert Stefanicki/IPS.

ZA’ATARI REFUGEE CAMP, Jordan, Nov 19 2012 (IPS) - No other camp for Syrians match the size of Za’atari. Equal rows of tents marked with the UNHCR logo spread to the horizon, dotted with lanterns and water tanks. Only a handful of people remain in sight, mostly on their way to or from the bathrooms.

Peace and quiet in a camp of 26,000 war refugees is surprising, even more in light of recent media reports of protests against unbearable living conditions.

Some more movement can be found on the main street, lined with food and clothes stalls. Water tankers and bulldozers pass by the walkers. “This is our entertainment. Walking back and forth. Or lying in the shade,” one of the passers-by says.

Za’atari was opened in late July to shelter the massive influx of Syrian refugees fleeing the violence in their country. The camp is in the north of Jordan, 15 km south of the Syrian border. It is set up on barren desert land where the common sandstorms cover everything in dust. Initially there was no shade, no medical assistance and very little water.

At the end of September complaints erupted into unrest. According to reports, angry refugees demolished a field hospital and one of the offices, provoking Jordanian security forces to disperse them with tear gas.

Since then about 5,000 refugees left the camp for Syria.

IPS asked around whether the exodus continues. True, some people are leaving. Because of the conditions? “No. To fight against the regime,” said a 28-year-old from Dara, who said his name was Ahmed. “Others leave only for a while to see what happened to their homes. Whatever the conditions are in the camp, they are still better than those in Syria.”

Ahmed rolls up his trouser-leg and shows marks from burning cigarettes. And a torn certificate that he had spent six months in prison.

“I came to the camp in August, crossing the border at night, after the fighting died down,” he said. Jordanian soldiers took him to the assembly point for refugees, from where he was transported to Za’atari.

The situation in the camp is changing for the better. All the humanitarian agencies – among them UNHCR (United Nations Refugee Agency), UNICEF (United Nations Children’s Fund), Save the Children, World Food Programme (WFP), Islamic Relief and the Jordanian Hashemite Charity Organisation – are working to improve conditions.

Different methods of feeding refugees are being tested. Because the Syrians kept complaining that food was not to their taste, distribution of hot meals has been abandoned. Now, every family gets a basket of staple products: canned beans, tuna, hummus, rice, oil, salt, sugar.

Outside the food distribution centre IPS spoke with 40-year-old Baha (nickname) waiting for a car to take him back to his tent. He pointed to two cardboard boxes filled with food: “Look, is this enough for two weeks for me, my wife and two children?”

His colleague, 36-year-old Mohammed, lifted a can of tuna with apparent disgust and said that fish is bad. “They give us the cheapest stuff.”

WFP which is responsible for feeding the refugees, says that the quality of food in Za’atari meets standards, and that the minimum of 2,100 kcal per person per day is exceeded by 300 kcal.

After giving up on hot meals, communal kitchens have been raised. Now refugees can cook for themselves but not everybody is happy.

“Beans and rice every day,” grumbled one of the women cooking in the kitchen. “Bread is not enough: we get three pita a day, but I used to eat four only for breakfast.”

The woman named Um Hassan has a more serious problem: “My husband is a diabetic. He cannot eat what is given here. I reported it, but to no avail.”

More changes are on way. “Instead of rations, the refugees will receive coupons to stores that will soon be opened in the camp,” Jonathan Campbell of WFP said. “They will be able to buy whatever they want.”

The hardest struggle is against the dust. The land for construction of the camp was razed, which breached its structure. Despite gravel and asphalt being laid, even a slight gust of wind rises up whirls.

In all 57 percent of Za’atari residents are children. Nearly 3,000 students are registered at school at the camp. Lessons are held in two shifts, with girls attending in the morning and boys in the afternoon. Also, UNICEF operates 20 Child Friendly Spaces – brightly painted tents where kids can play, socialise and try to overcome war trauma.

The approaching winter is a serious challenge. Winters in Jordan are surprisingly cold, especially in the northern areas, where temperatures drop below zero at night. Between November and March rain, strong winds and storms are common, as well as occasional snowfall.

“We have no blankets. Only a few are lucky to live in caravans. We are going to freeze,” said a resident at the camp. But the resident of a caravan is not happy either: “It is hot and stuffy, I sleep outside.”

“Transfer to the camp is a shock,” says Heinke Veit, regional information officer for the European Commission Humanitarian Aid Office (ECHO). “Everything is different from home. Libyan refugees in Tunisia were shocked at the lack of air conditioning, widely provided by Gaddafi. Their Tunisian hosts were also shocked – at such exorbitant demands.”

By mid-December 600 more caravans are expected, enough for 2,500 refugees. This means most of the Za’atari residents will spend this winter in tents. Humanitarian agencies are preparing warm clothes, thermal blankets, heated and insulated communal spaces and hot water supply.

More than a million people have been displaced by violence within Syria. In the worst case scenario the refugee population at Za’atari is going to swell threefold by the end of March – unless the war ends, a hope that keeps spirits up.