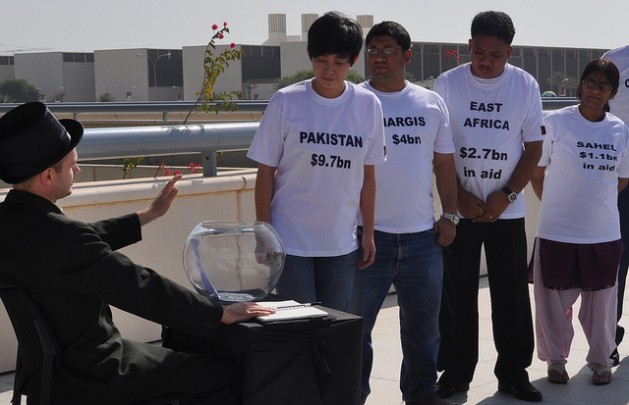 DOHA, Qatar, Nov 26 2012 (IPS) - Extreme weather disasters, including floods and droughts intensified by climate change, have totalled many billions of dollars in damages this year.

And much worse is yet to come, warned the World Bank, International Energy Agency and even the big accounting firm PricewaterhouseCoopers International Limited (PwC) in a separate reports detailing the consequences of failing to make major reductions in the fossil fuel emissions that cause climate change.

Those reports also urged all countries attending the U.N. climate change negotiations here in Doha, Qatar to agree to do far more to reduce emissions.

“The U.S. does not anticipate increasing its emission targets beyond what has already been agreed to,” said Jonathan Pershing, head of the U.S. delegation at the U.N. Climate Change negotiations known as COP18.

“We are already making an enormous effort with singular urgency,” Pershing said in a press conference Monday.

The United States pledged to make a three-percent reduction compared to 1990 levels by 2020. Pershing said the U.S. is on track to meet that target. However, the U.S. target is nowhere near the 40-percent reduction scientists say must be made by 2020 to avoid extremely dangerous climate change of more than two degrees.

A newer analysis by climatologist Kevin Anderson at the Tyndall Centre for Climate Change Research in the UK suggests that 70-percent reductions are needed by industrialised countries by 2020, with similar reductions by most other countries a decade or so later.

Oil-rich Qatar is a controversial host for the annual two-week U.N. climate change conference. The small nation on the Arabian penninsula has the world’s biggest per person carbon footprint, mainly due to its huge gas and oil industry. With less than 2.5 million citizens, it is also one world’s wealthiest nations.

“I don’t believe in counting carbon on a per capita basis. What matters is how much each country produces, “said Qatar’s Abdullah bin Hamad Al-Attiyah, the COP18 president.

Hamad Al-Attiyah has an important role in leading the 191 nations participating here through a complex series of negotiations under the U.N. Framework Convention on Climate Change.

When asked if Qatar has a specific emissions reduction target, Hamad Al-Attiyah said the country has a national reduction strategy and had made and will continue to make investments in emissions reduction. “We are investing a lot of money,” he said. “We are confident that will reach the highest target compared to other countries”

He also pointed out that as an exporter of natural gas, Qatar is helping other nations use a lower carbon energy source compared to oil or coal.

Qatar and the COP president have yet to prove their leadership on the issue, said Wael Hmaidan, director of CAN International, a global network of over 700 non-governmental organisations (NGOs).

“This week, it is up to the president to prove to the world he takes climate change seriously. The best way would be to make a pledge for an emission reduction target for 2020,” said Hmaidan.

The Doha climate talks are the most complex ever, Figueres said. Three main tasks need to be accomplished during these talks. First is an agreement to reduce emissions from now until 2020 under the Kyoto Protocol framework. “Developed nations must take the lead here,” she said in a press conference.

The second is to lay the groundwork for a new post-2020 global climate treaty that will necessarily mean a rapid reduction of fossil fuel use to create a very low-carbon global society.

The third task is to provide technical and financial assistance to help developing countries reduce their carbon emissions and to adapt to impacts of climate change such as droughts, flooding, loss of agricultural productivity.

Three years ago, at COP 15 in Copenhagen, industrialised countries agreed to provide 100 billion dollars a year in new and additional funding to developed nations by 2020. They also agreed to a Fast Start Finance programme of 30 billion dollars from 2010 to 2012 to take the first steps.

While the fast-start funding has been delivered, only 33 percent can be considered new, according to a report from Oxfam International. The rest of the money was pledged before the Copenhagen conference – and at most, only 24 percent was additional to existing aid promises.

Just 43 percent of known Fast Start Finance has been given as grants. Most of it was in the form of loans that developing countries have to repay at varying levels of interest, the Oxfam report titled “The looming climate ‘fiscal cliff'” found.

There is no money for 2013. At Doha, countries are supposed to pledge new funding through the newly established Green Climate Fund that will be based in Korea.

“Developing countries are heading towards a climate ‘fiscal cliff’ without any certainty about how they will be supported to adapt to climate change risks, (with the fund) being left as an empty shell for the third year in a row,” Gore said in a release.