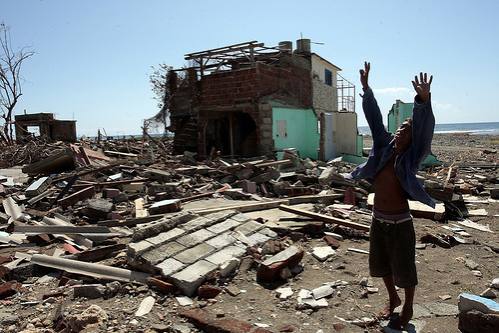 SANTIAGO DE CUBA, Nov 20 2012 (IPS) - You can still see broken plates, toys, books and some photographs among the rubble that was once the homes of Rey Antonio Acosta’s family and other families in Mar Verde, the beach community where Hurricane Sandy made landfall in this eastern Cuban city.

“Come here and see what pain is,” the 12-year-old boy, who will forever remember the early hours of Oct. 25, when winds of up to 200 kilometres per hour and waves nine metres high wrecked dozens of houses along the coast here, tells Tierramérica*.

He talks about how he saw the eye of the hurricane, “black and with stars in the centre,” and the calm as it passed by. “But then the waves rose higher and the wind became stronger. We heard something like the roar of a beast over us. People were crying and I thought my time had come (to die),” he said.

His young age does not prevent him from learning a lesson from Sandy. “Now that I know what a hurricane is, when the next one comes we won’t take our time evacuating,” he said. The vast majority of the citizens of Santiago admit that the devastating blow from Sandy took them by surprise, in spite of the meteorological warnings.

“We thought there would just be a bit of wind and rain, and that would be all,” says María Caridad, who lives in Santiago de Cuba, the provincial capital. Like many others in this city of half a million people, her house, which was built about a century ago, was not fit to withstand the onslaught.

“None of my neighbours took Sandy seriously,” says the 50-year-old Caridad, on whose house an adjacent wall fell, causing the roof to collapse and leaving the family at the mercy of the wind. “We took advantage of a moment’s calm to cross over to the balcony of the next-door apartment and seek shelter.”

Other people complained that in their neighbourhoods there was no electricity from an early hour, so they did not hear the last meteorological warning, announcing that the hurricane’s path would go right through Santiago de Cuba, which is densely populated and has a largely precarious housing stock that is vulnerable to disasters.

“Cyclones usually passed close to Santiago de Cuba and came from the east. Sandy came from the north, and it was the first time the eye of the hurricane passed right over us. If it had come in the daytime, it would have caused more deaths than the 11 that occurred, because people would have been out on the street,” Eddy Acosta, of the Mar Verde Civil Defence council, told Tierramérica.

Nearly three weeks after the storm, the streets of Santiago have been cleared of rubble. But the trees, stripped of foliage and with broken limbs outlined against the sky, give it a strange wintry look. Many trees were pulled up by the roots and flung against buildings and houses.

As of Nov. 12 there was still no official account of the economic damage caused by Sandy, although an estimate by the United Nations office in Cuba reckoned 137,000 houses were damaged in Santiago de Cuba, 65,000 in Holguín and 8,750 in Guantánamo, the other two eastern provinces that were most affected.

Serious damage was suffered by industry, telecommunications, electricity and agriculture, and recovery is expected to be extremely difficult in a country trying to bolster its weakened economy, and that in 2008 was ravaged by three hurricanes, which caused 10 billion dollars in losses.

The fury of wind and waves devastated not only Mar Verde, but other coastal communities like Cayo Granma and Siboney, and several tourist facilities along the shore. According to the authorities, Sandy pressed home the need for “realistic” proposals in terms of construction methods and land use planning.

Researchers studying the impact of climate change in Cuba estimate that 577 communities in the country will be exposed to floods, due to a rising sea level and the swell caused by increasingly intense hurricanes.

They recommend working to protect ecosystems like mangroves and coral reefs that provide natural barriers against tropical storms, as well as avoiding investment in construction in high-risk seaside areas.

Sandy struck densely populated areas where people were not accustomed to dealing with hurricanes and their enormous capacity for devastation, Ramón Pérez, an expert at the Institute of Meteorology’s Climate Centre, told Tierramérica. In his view, the best form of adaptation is prevention.

“Considering that there may be more intense hurricanes in future, the first thing we need to do is prepare ourselves to deal with the present ones, including of course reduction of vulnerability (to natural disasters) and greater education,” said the expert about the lessons learned from the latest hurricane.

Sandy was the 18th tropical storm of the 2012 season, and the 10th to reach hurricane status. The winds and intense rains affected Haiti, the Dominican Republic, Jamaica, Cuba, the Bahamas, Bermuda, the United States and Canada, leaving billions of economic losses and dozens of fatalities in its wake.