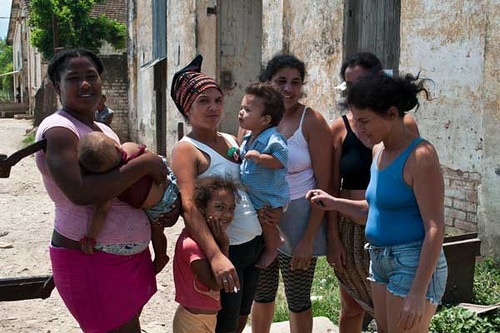 Most women in Cuba are unaware of the struggle it took to gain recognition of women’s rights. Credit: Jorge Luis Baños/IPS

HAVANA, Nov 28 2012 (IPS) - There are no purple billboards on city streets, and no public service announcements on television to mark the date. But many different voices in Cuba remember that this year marks the centennial of the birth of the local feminist movement, a platform for fighting for equality and against gender-based violence.

“On this 100th anniversary, we need to paint the island purple,” historian Julio César González Pagés told IPS, referring to the colour that symbolises feminism around the world.

Cuba does not have any self-described feminist organisations at this time, even though the feminist current of thought has its followers here and is studied in universities. The anniversary “is passing without much glory,” lamented González Pagés, who invited everyone to pay tribute to the Cuban women who stood up to fight for their rights in 1912, as well as those who have continued their legacy.

It was in November of 1912 that the Partido Popular Feminista (Feminist Popular Party) was born. And in December the Sufragistas Cubanas (Cuban Suffragists) and the Nacional Feminista (Feminist National) parties were founded, marking the start of a political movement that was aimed first and foremost at winning the vote for women. And other women’s rights associations continued to emerge.

The movement persevered until winning most of its demands, such as the 1917 parental rights law and the 1918 divorce law, which made Cuba the first Latin American country to legalise divorce. However, the right to vote was not fully exercised until 1934.

“Ideas about women’s emancipation had existed in the country since long before,” said González Pagés, coordinator of the Ibero-American Masculinity Network. “But they became more visible in 1912, when women came together in feminist organisations.”

“When we appropriate that philosophy, we can fight for equality and against gender-based violence,” the activist said this month during a series of concerts that are being held in eight provinces as part of a prevention campaign.

Between January and March of this year, González Pagés and singer Rochy Ameneiro led a tour through 11 Cuban provinces in an effort to fight violence in music. The tour, which was called “All Women Against the Current,” included concerts, workshops for art students, and visits to places that are important in the history of Cuban women.

Many Cuban feminists applauded the creation in July of a national network for connecting the efforts of people and institutions for gender equality. The idea came up during a talk sponsored by the Mirta Aguirre Department of Gender and Communication at the José Martí International Institute of Journalism.

In separate efforts throughout the year, various organisations, universities, media outlets, blogs and others have discussed the feminist movement in Cuba, which went into decline after 1939. In response to the debates over this date, writer Teresa Díaz Canals called for a moment of “collective reflection.”

“We have to come to an agreement and clarify that the history of women is not just the history of feminists,” she said in an interview with IPS. “We cannot toss out our legacy to the ‘mute ones,’ our mothers,” she said. For her, many people continue to confront machismo “quietly, without making any declaration of faith or winning any battles.”

National oblivion has thicker layers, which writer Inés María Martiatu tears apart as a way of vindicating the struggle of black women in Cuba.

“Ignorance about Afro-feminism in Cuba reduces the history of the movement to a certain era, and emphasises the leadership of middle- and upper-class white women,” she told IPS.

“When black and poor women are excluded or minimised, that history is incomplete,” said Martiatu, who is the co-author, along with Daysi Rubiera, of the compilation Afrocubanas: historia, pensamientos y prácticas culturales (Afro-Cuban Women: History, Ideas and Cultural Practices), published in 2011. The conditions they live in and their demands have been different, she said.

And other voices highlight the struggle of lesbians for their rights.

To fight against that oblivion, historian and researcher Raquel Vinat de la Mata has devoted many years of her life to highlighting the role of women in the 19th century. “It is painful that we still do not have a book about women’s history,” she lamented, holding an unpublished book about the biographies of outstanding Cuban women.

“The lack of information about the Cuban women’s movement and its actions has really hurt us,” she said. “People tend to think that we were just given all of our rights, and that is why many women do not do more to defend the ones they have,” said Vinat de la Mata, who said she has observed “a resurgence of machismo” in society today.

Cuban women earn the same wages as men, have access to free abortion on demand, and enjoy paid maternity leave and shared paternity, among other benefits. At the end of 2011, women held 43.3 percent of seats in parliament and 36.7 percent of leadership posts, and made up 61 percent of university students.

However, women workers face a double workday, given that they shoulder most domestic work, and they are a minority in jobs with high economic remuneration and decision-making power. And inequalities include the persistence of gender-based violence, although no statistics exist to reflect its magnitude.

After the decline of the first wave of feminism, which was described as liberal, the struggle slumped until it reappeared as part of the leftist guerrilla forces that won the 1959 revolution.

Vinat de la Mata recalls those years “very fondly,” when she was one of the anonymous protagonists of the “revolution within a revolution.”

She was referring to the emancipation of women within the socialist transformations that began at the time. In 1960, various organisations in the country merged to form the Federation of Cuban Women, the only legal group representing women in Cuba today.

Through the Federation, women have increased their participation in the public sphere, for example. In 1993, the Asociación de Mujeres Comunicadoras (Association of Women in Communication), Magín, was created, to work for gender awareness in the media. But it never received the official authorisation it requested, and was shut down in 1996.

“Feminist awareness should not be based solely on an organisation, but on each one of us,” Vinat de la Mata said. “It has cost those of us who are feminists today a lot of work to open the way,” she said, recalling the stigma that was associated with the term “feminist” until the 1980s, when studies on women and gender emerged in Cuba.