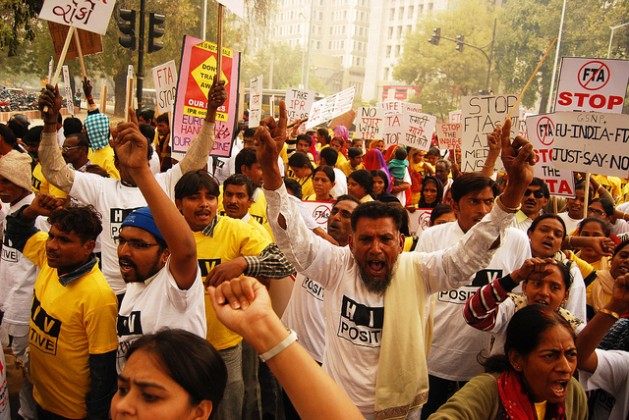 BEIJING, Nov 8 2012 (IPS) - As the northern Indian state of Rajasthan rolls out an ambitious universal healthcare plan, the discontent of the state’s doctors stands in stark contrast to the joys of the 68 million people who will benefit from the scheme.

Just a little over a year ago, the state government began supplying free generic drugs to its massive population, effectively stripping doctors of the ability to prescribe more expensive branded medicine.

Some 350 essential generic drugs are now being distributed free of cost. As a result, outpatient visits have jumped 60 percent and inpatient admissions are up 30 percent, despite the fact that public health facilities are overcrowded and understaffed, and many people have to travel long distances to reach one.

According to news reports, over 200,000 people are currently taking advantage of the programme.

“(This) has broken the cosy relationship enjoyed for decades between doctors and (drug) manufacturers,” Dr. Nirmal Kumar Gurbani, advisor to the Rajasthan Medical Service Corporation (RMSC) that was constituted by Chief Minister Ashok Gehlot to run the scheme, said during a presentation at the Second Global Symposium on Health Systems Research in Beijing last week.

Gurbani, a professor at the Indian Institute of Health Management and Research (IIHMR), added that the ‘Rajasthan model’ is being used as pilot for a similar scheme throughout India, which could bring free drugs to the country’s 1.2 billion residents.

One of the programme’s goals is to end price manipulations of private pharmacies and manufacturers.

“Cipla, for example, produces three kinds of ‘cold’ tablets, which all have the same chemical ingredients. It sells the generic drugs to pharmacies at a wholesale price of about two Indian rupees (0.03 dollars) per pack (of ten tablets) but sells the branded drugs for 23 rupees (0.42 dollars) per pack.

“The chemist then sells all three drugs for anything between 27 to 39 rupees (0.50 to 0.72 dollars) as per the printed price. Thus the patient is at the mercy of the doctor or the pharmacy, and will take whichever drug is recommended to him,” Gurbani explained to IPS.

To counter this practice, the government now buys generic drugs directly from the manufacturers and has “developed infrastructure to hand them over to patients through the 13,874 (approved) drug distribution centres,” Gurbani added.

Patients that are obliged to embark on lifelong drug courses – for conditions like diabetes or heart disease – have hitherto struggled to make their payments.

“A particular brand of medicine used for diabetes costs 117 rupees (2.17 dollars), but we purchase 10 tablets of generic medicines for diabetes at 1.97 rupees (0.036) dollars,” said Gurbani, adding that the difference in pricing certainly did not mean a compromise on efficacy and quality.

Gurbani, a former secretary of the Essential Drug List Committee for the Rajsathan state government, says medical expenses are the second most common cause of rural indebtedness in India.

Citing official data, he told the audience at the conference that more than 40 percent of those hospitalised in India needed to borrow money or sell assets in order to afford treatment.

The cost of a single hospitalisation has pushed 35 percent of patients below the poverty line. In fact, unaffordable healthcare has prevented over 23 percent of the sick from consulting a doctor.

The scarcity of medical professionals has contributed to healthcare costs reaching astronomical rates. According to the World Health Organisation, India has just 6.5 physicians to every 10,000 patients. By comparison, China has 14.2 doctors, while Britain has 27.4 physicians for the same number of patients.

The expenditure on drugs alone constitutes between 50 to 80 percent of healthcare costs in India. And all this in a country regarded as the “world’s pharmacy”, Gurbani lamented.

And yet, said Gurbani, “two-thirds of the population do not have regular access to essential drugs.”

Dr. Ravi Narayan, an Indian public health academic who is also part of the All India Drug Action Network, was full of praise for the Rajasthan government’s initiative.

“Rajasthan has a very strong people’s movement and with people like Samit Sharma who heads the RMSC, this was bound to succeed,” he told IPS, on the sidelines of the Beijing symposium.

The runaway success of the Rajasthan model, according to Narayan, has proved that “India is going into the Rajasthan experiment”.

Tamil Nadu, a state of 72 million people, is also providing free medicine for all. Even Karnataka is building on these models, Narayan informed IPS.

With India moving towards universal health coverage (UHC) in the next two years, it has budgeted nearly 300 billion rupees (55.9 million dollars) to fund the programme. It hopes to be able to provide free drugs to 52 percent of the population by April 2017.

The central government will fund 75 percent of the programme, with states doling out the rest.

India’s proposed UHC plan contains many of the features of Rajasthan’s model, such as centralised procurement, regulations to ensure that doctors prescribe cheap generic drugs rather than branded medication, a list of “permitted” drugs and distribution limited to official government health centres.

“It’s not just possible in India, it’s possible all over the world,” said Gurbani.

Obstacles can be overcome

“Conceptually the model has a lot of strength, but it’s difficult from a political perspective. There has to be harmony between the central government and the (28 states and seven union territories) in India,” Abdul Ghaffer, executive director of WHO’s Alliance for Health Policy and Systems Research, told IPS.

With the country’s public health system already under resourced and struggling to meet the needs of 1.2 billion people, 40 percent of whom live below the poverty line, there are serious challenges to expanding the programme nationwide.

There have been occasional shortages of medicines, which Gurbani attributes to the early stages of a project finding its bearings in a geographically diverse region.

“There is the tribal belt as well as the desert and then the urban areas, besides large rural pockets. The needs are different, so at times we ran out of stocks. These teething problems were inevitable; in the course of time, these shortfalls will be eliminated,” Gurbani predicted.

Others at the conference raised thorny questions about the mammoth infrastructure this process will require, hinting that some states may not yet be in a position to set up warehouses and cold storage facilities, or test all the drugs made by roughly 12,000 manufacturers across India.