NEW DELHI, Mar 24 2011 (IPS) - As India prepares to seal a sweeping trade and investment deal with the European Union (EU) in April, civil society groups are campaigning to limit the agreement’s repercussions within the local generic drug industry here upon which millions of people around the globe depend. 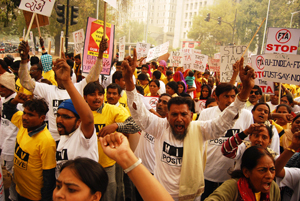 India’s commerce secretary, Rahul Khullar, is expected to be in Brussels Apr. 6-8 to sign a comprehensive agreement that will lower tariffs on a range of goods, liberalise investment rules and expand the market for services.

The deal, in the making since 2006, is between the world’s largest economy and a developing country that is about eight percent of its GDP size. The EU’s GDP was estimated at more than 16.4 trillion U.S. dollars in 2009 when India’s stood at 1.3 trillion dollars.

“We hope that Indian negotiators will withstand pressures and ensure that the existing intellectual property rights regime is not tampered with to allow extension of patents, especially as a number of drugs are going off patent, this year,” said Mira Shiva, a member of the All India Drug Action Network.

“The World Trade Organisation’s TRIPS [Trade-Related Aspects of Intellectual Property Rights] was bad enough but we are facing a TRIPS-Plus bilateral deal which may prove even worse for public health,” Shiva told IPS.

If the India-EU free trade agreement (FTA) introduces TRIPS-Plus measures, people on HIV treatment, for example, may not be able to access second-line treatment when they become resistant to medicines they already are on, Shiva said.

By refusing to recognise patents and by leveraging its large domestic market India has, in the decades since 1970, been able to build up a powerful pharmaceutical industry known for its cheap and efficacious generic versions of patented drugs.

After 2005, India has been implementing changes mandated by the WTO, but these are less stringent than the EU intellectual property regime.

UNAIDS, the joint United Nations programme on HIV and AIDS, notes that the flexibility afforded by TRIPS has brought down drug prices and helped lower the cost of first-line generic anti-retrovirals (ARVs) by as much as 99 percent in the last decade.

The EU can be expected to demand data exclusivity on drugs as it has done in the case of all its other FTAs, said Shiva. Data exclusivity will allow drug manufacturers a monopoly, based on clinical test data generated on the safety and efficacy aspects of a new drug.

“What this means,” explains Amit Sen Gupta, public health expert at the Delhi Science Forum, a voluntary organisation, “is that an Indian drug company planning to produce the generic version of a patented drug will have to conduct its own clinical trials before it can be licenced and marketed.”

“Fresh trials would naturally add to the cost of the drug, and delay its introduction into the market,” Sen Gupta said. Currently the EU grants up to 11 years of exclusive rights based on successful clinical trials and other test data.

So far Indian regulators and courts have refused to support international pharmaceutical companies trying to stop the manufacture of generic drugs by making token changes in the formulation of drugs or by finding and adding new uses for them.

In a celebrated case, the Basel, Switzerland-based Novartis AG failed to obtain patent protection in India for a new formulation of its anti-cancer drug, Imatinib, also marketed as Gleevec. In 2007, Novartis challenged India’s patent laws at the Madras High Court but found its writ petition dismissed. The Supreme Court in New Delhi is currently hearing an appeal.

Similarly, the U.S.-based Abbott Laboratories could not stop the manufacture in India of generic, heat resistant versions of the anti-AIDS drugs, Ritonavir and Lopinavir.

“The EU naturally sees India’s large and legal domestic market as well as its drug manufacturing base as a threat,” Shiva explains.

Government programmes to provide anti-HIV treatment, such as those run in Brazil and South Africa, have depended heavily on Indian generic ARVs. Brazil’s remarkable turnaround in controlling the spread of HIV has been attributed to the import of affordable generic ARVs from India.

India’s generic drug-makers play a major role in the South African government’s HIV and AIDS prevention and treatment programme. Last year, when a 700 million dollar tender was floated for the supply of ARVs, the Indian manufacturer Ranbaxy cornered a 131 million dollar order. The UNAIDS report for 2007 estimated that 5,700,000 South Africans had HIV/AIDS – or just under 12 percent of the country’s population of 48 million.

Both Brazil and South Africa also produce significant amounts of generic drugs themselves and have stakes in the viability of an industry threatened by international intellectual property rights regimes and FTAs.

Leena Menghaney, legal expert and campaigner for the Paris-based Medicins Sans Frontieres (Doctors Without Borders), said the outcome of the India-EU deal was being closely watched by Brazil, South Africa and other generics manufacturing countries like Thailand.

Menghaney said compulsory licencing, allowed under TRIPS, is threatened by expropriation claims made under investment rules in bilateral agreements. Compulsory licensing would allow a government to override a patent in emergencies such as an epidemic and arrange for the manufacture or import of generic versions of patented drugs.

“Pharmaceutical companies have argued that compulsory licences are indirect expropriation and have resorted to claims under provisions in bilateral FTAs,” Menghaney says.