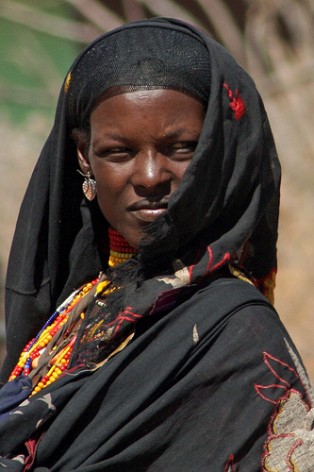 MORA, Cameroon, Nov 7 2012 (IPS) - Cameroon’s new biometric registration of voters may end up disenfranchising many potential voters, especially women in the country’s predominantly Muslim north where cultural practices may prevent them from having their photos taken.

Biometric voter registration, which involves the use of fingerprint scanners and digital cameras to capture the bio-data of applicants, began in this west Central African nation on Oct. 1 in the country’s capital Yaounde and will be introduced to all 360 council areas across Cameroon.

In order to register to vote in the February 2013 parliamentary and local council elections, citizens are required to have or obtain a national identity card, which requires a photograph. In addition, passport-sized photographs must be taken of people registering to vote and people are not allowed to wear caps, lenses, veils or anything that could distort their facial identity.

In this part of the country, women are hardly allowed to go out, let alone remove their head-concealing veils as their husbands do not allow them to, even if the women themselves are willing.

Aisha Ibrahim, a housewife in Mora, a small locality in Cameroon’s Far North Region, in all probability will not be able to register to vote in February 2013.

Her husband, Alhadj Moustapha, told IPS that he was not comfortable with his wife removing her veil in the presence of another man.

“A true Muslim lady must cover her hair and her face,” he said with an air of finality, sending a clear message that he would never allow his wife to unveil in public.

Cultural practices in this patriarchal society tend to confine women to the home, preventing them from fully participating in society. Allowing women to get national identity cards could also be potentially upsetting for men who want absolute control over their wives.

Moustapha puts the situation rather brusquely: “Women with a national identity card could be difficult to control. Remember this is a key document required for anyone to travel … and your wife may just escape from home and go elsewhere … I can’t take such a risk.”

Ibrahim, however, has voted a couple of times in Cameroon’s various elections without an identity card.

“When it came to voting, the law at the time provided that any voter without a national identity card could present themselves with at least two witnesses,” Massao said.

Ibrahim was able to vote in accordance with these procedures.

“My husband and his friend flanked me as we went to the voting centre,” Ibrahim told IPS in a whisper. And casting a furtive glance around, as if she was about to betray a prized secret, she said, before moving quickly away: “They instructed me to vote for the ruling party.”

And she was not the only one. According to Massao, 40 percent of people who registered for the 2011 presidential election in the region did so without an identity card. Most of them, he said, were women.

It is no wonder that John Fru Ndi, the leader of the country’s main opposition party, the Social Democratic Front (SDF), called that registration process a “gigantic fraud”.

“The method did not have the inbuilt mechanism for detecting multiple registrations and therefore there were several instances where some unscrupulous individuals registered more than once,” he told IPS.

“That is why the SDF fought relentlessly for the introduction of a biometric system in voter registration.”

Meanwhile, the elections governing body is already taking measures to ensure that cultural practices do not infringe on women’s right to vote.

“We are definitely worried by the situation,” Thaddeus Minnang, chief of operations at ELECAM, told IPS.

“As for women who would not take off their veils in the presence of men and do not even leave their homes, we plan to get female ELECAM officials to go to those homes and do the registration. This way, we will ensure the full participation of women in the process,” Minnang said.

But his optimism is tempered by the fact that many women in this part of the country also do not have a national identity card and would need to apply for that first in order to register.

“Women should register to vote. For that, they first need to get their official documents. Yet, there are still among us women without proper identification,” Minister of Women’s Empowerment and the Family Cathérine Abena told IPS.

Minnang said the electoral commission planned to work with political parties, civil society and the government to encourage all Cameroonians of voting age to acquire national identity cards. A special focus would be given to the northern parts of Cameroon, where ELECAM plans to sensitise husbands on the need to allow their wives to have a national identity card.

“We are ready to accept receipts testifying that someone is in the process of acquiring a national identity card,” Minnang said.

That women in the north of the country could find it hard to register on the voter rolls could worsen an already bad situation of electoral apathy in Cameroon, according to Owona Nguini, a professor of political science at the University of Yaounde.

Of the roughly 7.5 million people who registered for the 2011 presidential election, only 4.9 million voted. Observers have said that in a country where close to 11 million people have already reached voting age, such a turnout gives elected officials very little legitimacy.