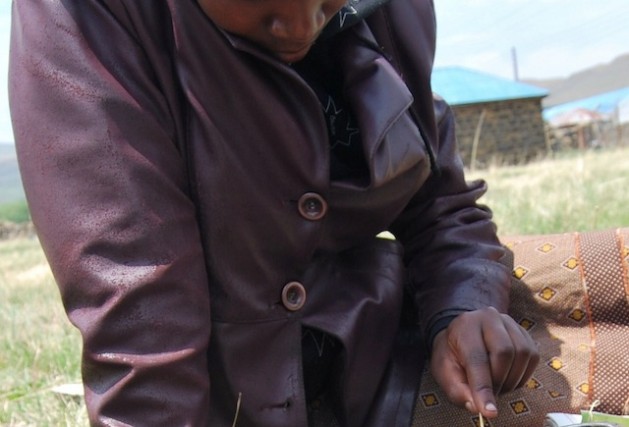 Teenagers who are known to be HIV positive are treated like social pariahs, often due to lack of information among their peers. Credit: Letuka Mahe/IPS

It was in that moment of fighting with another teenage boy that Cedric Owino from the sprawling Mathare slum, one of Kenya’s biggest informal settlements, accidentally discovered that he was HIV positive.

Until then it had been a secret his grandmother had kept from him – for 15 years.

“While we were fighting, the mother of the other boy started shouting that I might scratch her son and infect him with HIV,” Owino, 15, tells IPS.

Consequently, a bitter argument ensued between Owino and his grandmother, who is his guardian, since he is an orphan. She confirmed that he has been HIV positive since he was a baby.

“Disclosure is not easy,” Mwema Omollo, Owino’s grandmother, tells IPS. “If you tell your child, you fear that it will change how they live. People are still very much afraid of HIV. My daughter refused to take antiretroviral (ARV) drugs when she discovered that she was HIV positive. I didn’t want this to become Cedric’s fate too.”

Her daughter was afraid that if she did take ARVs, people in her community who dispensed the medication would realise her status.

Since he found out, Owino has twice attempted suicide.

“My family knew I was infected, why tell me that the drugs I take are for asthma, while they know it’s because I am HIV positive?” he asks. He dropped out of grade eight at the Young Stars Academy soon after discovering his status.

Owino is not the only teenager struggling to come to terms with his status. Anthony Andega, another HIV positive 15-year-old, also tried to commit suicide when he found out two years ago.

He cut himself with a knife. But because of the stigma surrounding the virus, people refused to come to his aid. A friend of Andega’s later told him that even though he had been bleeding profusely, people refused to touch or help him.

“No one wants to touch where you have touched. You become isolated,” Andega tells IPS. Not only that, but the news of his status spread.

“In this neighbourhood, we go to the same schools. If people know you have HIV, this information is spread all over school,” he says.

The Kenya Population Data Sheet says stigma towards adolescents and teenagers living with HIV is high, with “55 percent of adolescents interviewed indicating that they preferred that the HIV status of their family members be kept secret.”

According to statistics from the Ministry of Health, of adults aged 15 to 64 years, an estimated 7.1 percent, or 1.4 million, are living with HIV in Kenya. Further, among youth aged 15 to 24 years, 3.8 percent are infected, rivalling older adults aged 50 to 64, whose prevalence is five percent. 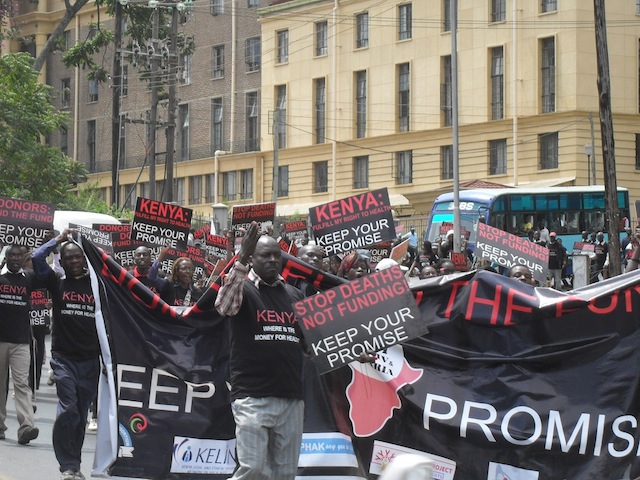 Demonstrators against the suspension of Round 11 of Global Funding for Aids, TB and Malaria, earlier in the year. Credit: Miriam Gathigah/IPS

Doctors Without Borders, which has worked in Mathare with caregivers to improve the rate of disclosure among families affected by HIV, reports that only two percent of family members disclose their status to each other.

It is an issue of concern. Ann Mburu, a nurse who works for Adolescents Count Today (ACT), a project targeting HIV positive teenagers or those who have been affected by HIV, says “the number of HIV positive adolescents is likely to increase as most adolescents practice sex with their peers without any knowledge of their status.”

“Since parents and guardians don’t easily disclose to older children who are infected, HIV/AIDS will remain a big blow to the community with increased stigmatisation and discrimination due to the secrecy,” she says

Family Health Options Kenya (FHOK) has rolled out ACT in Thika in Central Kenya, and in Eldoret and Nakuru in the Rift Valley region.

“Despite 22 percent of boys and 11 percent of girls having had sex by the age of 15, 60 percent of adolescents considered themselves not to be at risk of HIV infection,” explains Esther Muketo, programme manager at FHOK. National figures are unavailable.

Paediatrician Dr. Alice Muchemi has seen many teenagers grapple with their HIV status.

“Teenage years are often difficult, self-confidence is usually fragile. Rejection from the opposite sex is often viewed as a tragedy. Their bodies are also hungry to indulge in sex. But teenagers who are known to be HIV positive are treated like social pariahs, often due to lack of information among their peers,” Muchemi tells IPS.

Kenya’s National Guidelines for HIV Testing and Counselling permit health workers to inform children “who are pregnant, married, or sexually active” of their HIV status. But this does not always happen.

Before discovering that he was HIV positive, Owino had been sexually active for a year and had only used a condom on one occasion.

“Just like most boys here, we have sex when an opportunity presents itself. I thought of HIV as a disease for grown-ups,” Owino justifies.

Now that he knows his status he has not attempted to contact his former partners. “Mathare is a big slum, I don’t know where these girls live now. Even if people know about my status, I am not going to talk about it,” he says.

Paul Ndegwa, an HIV positive activist, says that while the government is succeeding in its fight against paediatric HIV, it is largely ignoring the needs of HIV positive teenagers. According to UNAIDS, the Joint United Nations Programme on HIV/AIDS, there has been a 40 percent reduction in new infections among children in Kenya.

“The problem is in the transition into adolescence and teenage years. You are dealing with young people who are at an age where they don’t communicate well. The needs of HIV positive teenagers are real and they are ignored just the same way the sexual and reproductive health needs of teens in general are ignored,” he tells IPS.