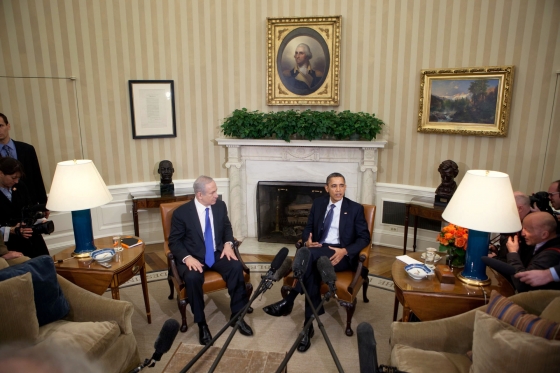 His government’s announcement that it will build 3,000 new housing units in East Jerusalem and the West Bank and expedite planning for the development of the area known as E-1, the last undeveloped area that links the northern and southern parts of the West Bank, is seen here as a particularly damaging provocation both for Palestinians and the administration itself.

“Construction in E-1 would make it almost impossible to provide a future Palestinian state the contiguity it needs to be viable and cut it off from East Jerusalem,” warned Debra DeLee, president of Americans for Peace Now (APN), a Jewish peace group.

“Without a viable Palestinian state in the West Bank and the Gaza Strip, Israel is doomed to become a bi-national state, which means an end to the Zionist vision of an Israel that is both Jewish and democratic,” she added in an appeal to Obama to “personally intervene with …Netanyahu and demand that his government reverse its decision.”

Hers was one of a number of voices urging the president to take much stronger action against the Israeli leader, who is also withholding from the PA more than 100 million dollars in desperately needed tax receipts in retaliation for its successful bid at the U.N. General Assembly late last month to gain “non-observer state status”.

Unlike several European countries, notably Britain, France, Spain, Denmark, and Sweden, the U.S., one of only nine countries – out of 188 – that voted against the PA’s diplomatic upgrade, has not yet formally protested Israel’s actions.

Indeed, its initial reaction to Israel’s announcements was relatively muted. Calling the moves “counter-productive” to the goal of resuming peace talks, the White House simply “urge(d) Israeli leaders to reconsider these unilateral decisions…” After three days, the State Department released a statement noting that construction in the E-1 area would be “especially damaging to efforts to achieve a two-state solution.” Obama himself has been mum on the issue.

The relative mildness of the U.S. response to date has suggested to many here that the president has no intention of taking on the Israeli leader in a renewed effort to get a peace accord, a goal he pursued with considerable earnestness in the first 18 months of his administration before essentially giving up pending the outcome of this year’s election.

Given the Israel lobby’s strength with both sides of the aisle in Congress, Obama may want to avoid more bruising battles in his second term with Netanyahu, whose right-wing coalition is considered likely to win next month’s parliamentary elections, and his powerful supporters here.

He may wish instead to focus on domestic priorities, further reducing the U.S. “footprint” in the Greater Middle East, and consolidating his “pivot” to the Asia-Pacific.

Nonetheless, there is little love lost between Obama and the Israeli leader, who all but publicly endorsed Obama’s Republican challenger, Mitt Romney, during the election campaign.

An hint of that bad blood surfaced this week amidst reports that, in a high-powered, off-the-record meeting with prominent Israelis and their U.S. supporters at the Brookings Institution’s Saban Center last weekend, former White House Chief of Staff Rahm Emanuel, who remains close to Obama, accused Netanyahu of having “repeatedly betrayed” the president.

Emanuel, currently the mayor of Chicago, singled out Israel’s latest moves against the PA, which he reportedly described as particularly galling, given Washington’s support for Israel during its brief war last month against Hamas in Gaza and its lonely opposition to the PA’s diplomatic upgrade at the U.N.

Some believe the president may be waiting to take action until he resolves more-urgent business, notably averting the so-called “fiscal cliff” at the end of this month, then negotiating a bigger deficit deal early next year, and getting a new foreign-team up and running.

Others, including former President George W. Bush’s top Middle East aide and a staunch defender of Netanyahu, Elliott Abrams, believe Obama may be playing a double game by, on the one hand, muting U.S. displeasure with Israel while, on the other, encouraging Washington’s European allies to distance themselves from Israel – as they did during last week’s U.N. vote.

The decision by Germany, which has long defended the Jewish state’s actions in world forums, to abstain on the Palestinian vote, reportedly came as a particular shock. Indeed, the only European nation joining the U.S. in the lonely “no” column was the Czech Republic.

“The sense that the Netanyahu coalition can’t get along with Europe or the United States may hurt Netanyahu with Israeli voters – which is perhaps the precise objective of this entire effort,” Abrams wrote in National Review Online.

While such a strategy may indeed bear fruit, others insist that the stakes for the U.S. are too high to forgo more-assertive tactics toward Israel’s leadership, particularly as it has itself moved increasingly rightward. This is particularly true in light of the Arab Awakening and the rise of political Islam throughout the Middle East.

“The clear trend is toward both greater religiosity and greater identification with the Palestinian cause,” noted Amb. Chas Freeman (ret.), a top U.S. Middle East specialist, in a recent lecture in which he also argued that Israel’s “mid-November assault on Gaza has simply re-inforced the regional view that Israel is an enemy with which it is impossible to peacefully co-exist” and that Israel’s land grabs were making a two-state solution increasingly improbable.

Zbigniew Brzezinski, who served as national security adviser to former President Jimmy Carter, argued that Obama should seize back the initiative from the influence of the Israel lobby in Congress, stressing that he can overcome opposition there “if he stands firm for ‘the national interest’.”

Last week’s U.N. vote, he noted, “marks the nadir of the dramatically declined global respect for U.S. capability to cope with an issue that is morally troubling today and, in the long run, explosive.” The greatest opportunity for taking action, he added, would be in the first year of his second term.

Similarly, Paul Pillar, a career CIA analyst who also served as National Intelligence Officer for the Near East from 2000 to 2005, called this week on his nationalinterest.org blog for Obama to treat Netanyahu much the same way as he is dealing with Republicans in Congress over the budget: “by taking his message campaign-style to the country.”

“His appeal over the heads of members of Congress is a recognition that the opposition party understands only the language of political force. But Mr. Obama also has had enough bitter and frustrating experience with Netanyahu to warrant reaching similar conclusions regarding dealing with Israel,” he wrote, noting that policy toward Israel has become “just as much a domestic issue as the budget,” particularly in light of the Israeli prime minister’s own interference in the U.S. elections.

Moreover, he noted, a very recent survey conducted by the Saban Center’s Shibley Telhami found that 62 percent of the Israeli Jewish electorate hold favourable opinions of Obama, suggesting that a “charm offensive” there by the U.S. president could yield dividends.