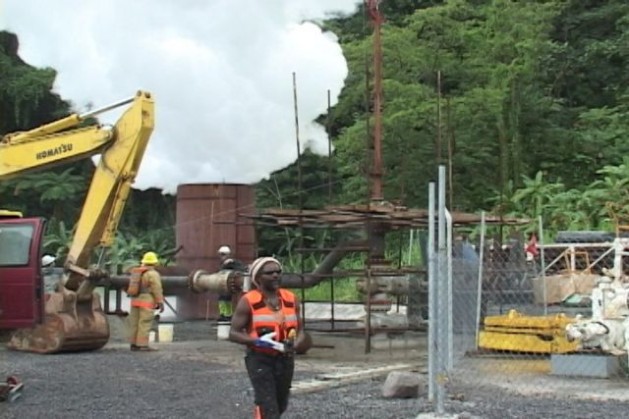 Dominica hopes geothermal will take a bite out of its 220-million-dollar a year fuel bill. Credit: Courtesy of Government Information Service (Dominica)

ROSEAU, Jan 22 2013 (IPS) - What a difference a trip makes. Before visiting the French island of Guadeloupe, Alfred Rolle had vocally expressed fears about the possible health effects of a decision to drill geothermal wells in the village of Laduat on the outskirts of Dominica’s capital.

Now he is singing a different tune after Dominica’s government, which is putting all its proverbial eggs in the geothermal basket, led a delegation over the weekend to the French island to observe the operations of the Bouillant Geothermal Plant there.

”We have spoken to the residents around the immediate area of the plant and they are less than four or five feet away and there is no ill effect about the project here,” Rolle told IPS.

“All the gases are properly contained and even the waste water is properly disposed of,” he said.

Geothermal wells release greenhouse gases trapped deep within the earth, but these emissions are much lower per energy unit than those of fossil fuels.

Dominica is currently leading 52 small island developing states in an ambitious bid to cut their carbon emissions a whopping 45 percent over the next two decades – far beyond anything pledged by the world’s richest nations.

Local resident Harris Hodge, who was also on the trip to Guadeloupe, said, “I can say what I have seen here puts to rest any doubt I had about the project back home.”

The endorsements are significant for the Roosevelt Skerrit government, which has spent millions of dollars developing the geothermal project here in the belief that it holds the key for a better socio-economic future for the island’s 100,000 people.

Energy Minister Rayburn Blackmoore, who led the delegation, told IPS that the government intends to implement more safety controls than exist at the 35-year-old plant in Guadeloupe.

“We are in 2013 and there are a number of measures we have taken to deal with the protection of the environment and prevent certain risks and that is why we have engaged the best experts,” he said.

In 2009, the government in collaboration with the Regional Councils of Guadeloupe and Martinique and energy and environmental agencies of the neighbouring French territories, banded together under the Caribbean Geothermal Initiative to undertake a surface investigation study to determine the island’s geothermal potential.

Following the comprehensive geological, geochemical, geophysical and related environmental and feasibility studies, the government said the island had the largest geothermal potential in the Caribbean.

With support from the European Union and the Agence Française de Dévelopement, three test wells will be drilled in the Laudat and Wotten Waven, part of the Roseau Valley area, to determine the potential of geothermal resources.

Prime Minister Skerrit told Parliament recently that his administration planned to construct a 10 to 15 megawatt geothermal plant in keeping with its policy of developing a carbon negative economy by the year 2020.

He said one study has shown that “such a geothermal plant could result in a reduction of electricity bills by 45 to 50 percent”.

“There is a strong likelihood that the plant could be operational by 2014,” he said, as the government announced it had signed an agreement with the Iceland Drilling Company to drill two full-sized geothermal wells in the Roseau Valley area at a cost of 6.7 million dollars. The drilling work is expected to commence by June this year.

But in recent weeks, residents of the villages in the Roseau Valley have been voicing concerns about the project at various community and town hall meetings.

One resident, Adenauer Douglas, himself an electrical engineer, said that while he has always been in support of the geothermal initiative, it “cannot be done in the absence of the people living in the area or an independent Environment Impact Assessment (EIA).

“The lack of inclusion and transparency to date has resulted in the present anxieties. For instance, some of the negative information circulating is the result of indifferent developers elsewhere not working in the best interest of residents and cutting corners on the best practices on health and the environment,” he said in a statement.

“Binary plants, which are closed cycle operations, release minimal emissions. Like hydro and unlike wind or solar, geothermal has 90+ percent availability, with down time assigned to maintenance. Geothermal power is home grown, thus reducing our dependence on foreign oil and saving our country millions.

“As we continue to suffer from sea level rise, coral bleaching, and more ferocious hurricanes triggered by global warming, we in Dominica must be leading world advocates for the reduction of greenhouse gases and a green alternative to development,” he wrote.

Trade and Industry Minister Dr. Colin McIntyre, who is also the parliamentary representative for the area, said “the health concerns of the people of the Roseau Valley are extremely important to us and…we are hearing concerns being raised by the people with reference to poisonous gases, volcanoes, earthquakes and of course the land issue.”

Operations Manager of U.S.-based Geothermal Resource Group, Sam Abraham, one of the many experts brought in by the government to deal with the concerns raised by the residents, said that geothermal plants can exist within populated areas under strict environmental controls.

“We are very confident in terms of the technology that we have, the expertise that we have and the monitoring system that we have that this can be done effectively, safely, and for the betterment of the country,” he told a news conference.

He said that Kenya, for example, is in the process of building a geothermal plant within a national park and it has had no effect on the flora and fauna there.