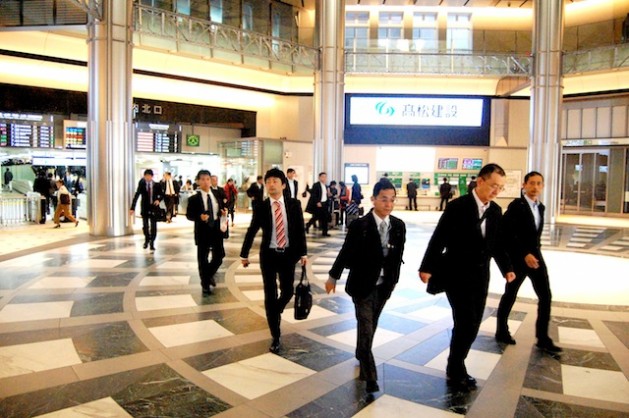 TOKYO, Jan 31 2013 (IPS) - Despite anti-discrimination laws and a steadily growing number of employed women, Japan is falling behind the rest of the world on gender equality. Widespread discrimination persists, and has only grown more subtle over the past years.

Japan is one of the world’s most industrialised countries but has always kept true to its old traditions. In the same way, traditional gender roles have always been a source of inequality in the world’s third largest economy. According to the United Nations Development Programme, Japan has consistently ranked as the most unequal of the world’s richest countries.

And the gap seems to be widening: last October the World Economic Forum’s annual report on gender gaps downgraded Japan’s rank from 99 to 101, alongside Tajikistan and Gambia in terms of political and social equality.

To Yuko Ogasawara, professor of sociology at Tokyo’s Nihon University, Japan’s downgrading doesn’t come as a surprise. “In this country it is still impossible to combine work and family.” she tells IPS. “That is the main reason behind the inequality. People, whether men or women, are expected to work until ten every day. If you want to raise a family that’s an obvious obstacle.”

Fifteen years ago Ogasawara published ‘Office Ladies and Salaried Men’, a book describing the typical Japanese office space where women were supposed to handle clerical work and serve tea while men could climb up the executive ladder. “Much has changed since then,” Ogasawara tells IPS. “There are more female executives now, women are given more chances. But one problem remains: 70 percent of women drop out of the work force after having their first baby.”

“After raising their children, it is very difficult for many women to come back,” says Kathy Matsui, a macro economist at one of Japan’s largest banks who has been studying employment of Japanese women since 1999.

“Oftentimes the problem is situated within organisations and their evaluation systems,” she tells IPS. “Most human resources departments reject women when they have a ten-year blank in their curriculum. For them, that suggests that you must have forgotten everything you ever learned and therefore are not suitable for hiring. That is subtle discrimination.”

“Women who do want to relaunch their careers can only get part-time jobs with a low wage,” Yuko Ogasawara adds. “They are very cheap compared to full-time workers, so lots of companies want to keep the system as it is. It provides cheap labour force.’

Discrimination is deeply engrained into the country’s institutions. “Japan has got numerous anti-discrimination laws,” says Yoshiyuki Takeuchi, professor of economy at the University of Osaka, “but still tax, pension, social security and health insurance are based on the model of a four-person family with a working father and a stay-at-home mother.

“In Japan, companies pay men a higher salary if their wives stay home. Women who restart as part-timers can only earn a limited amount of money. These are rules and regulations that were developed during the seventies based on the economic reality of that time. They have barely changed since then. Nowadays they keep women from trying to restart a career.”

“The work force is shrinking and Japan is not very open to immigration,” Kathy Matsui tells IPS. “There’s no other solution than to use your existing population more. Women comprise 50 percent of the Japanese population, they are highly educated but stop working at a certain age. There are no other options than to take measures to try keeping women on the working track. This is not a feminist point of view but the objective analysis of an economist.”

However, Japanese society doesn’t seem very willing to accept the idea. A poll conducted by the Japanese government in December showed that 51 percent of the population thinks women should stay at home and care for the family while their husbands work.

That was 10.3 percent more than the view in a similar survey in 2009. The increase was particularly noticeable in the age category 20 to 30.

“Today’s young generation knows what it means to grow up with a working mother,” says Suzanne Akieda, a Belgian archaeologist who has been living and teaching in Japan for more than 40 years. “In the past lots of Japanese women have tried to push aside their personal lives to pursue a career. Now many start to reconsider if that was the right thing to do. This is the backlash.” (END)