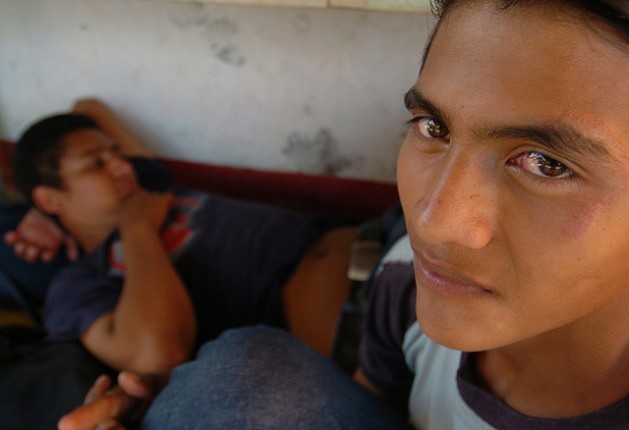 A 16-year-old Guatemalan migrant prepares to head to the U.S. Credit: Wilfredo Díaz/IPS

WASHINGTON, Jan 28 2013 (IPS) - A bipartisan group of U.S. senators on Monday unveiled a set of principles that will serve as an initial framework for a legislative push that many are increasingly optimistic could result in the largest overhaul of the country’s immigration system in decades.

While the exact details of any future legislation will take months to be formulated, some advocates are warning that too much emphasis is being placed on enforcing security along the U.S.-Mexico border, an element that has stymied progress on immigration reform for years.

The announcement comes just a day ahead of a planned major address by President Barack Obama, in which he will outline his own vision for such an overhaul. While some are suggesting the congressional package may have undercut the president’s announcement, on Monday the president’s spokesperson called the new proposal “a big deal … an important development”.

“Other bipartisan groups of senators have stood in this same spot, but we believe this will be the year Congress finally gets it right,” one of the members of the eight-senator team that put together the framework, Chuck Schumer, a Democratic senator and a key Obama ally, told journalists Monday.

“The politics on this have been turned upside down. For the first time ever, there is more political risk in opposing this type of reform than in supporting it, and we believe we have a window to act.”

The new proposals outline cracking down on employers who hire illegal immigrants, increasing visas for skilled workers, and establishing an agricultural worker programme. Critically, and most controversially, they also foresee creating a “tough but fair path to citizenship” for the 11 million unauthorised immigrants currently thought to be living in the country.

Schumer says the legislation will hopefully be out of the Senate and headed to the U.S. House of Representatives by late spring or summer, while the House is reportedly already at work on its own bill.

“The Senate immigration framework is a welcome step forward toward identifying the core issues to address and negotiate,” Manuel Orozco, director of remittances and development at the Inter-American Dialogue, a Washington think tank, told IPS.

“The requirement of a two-stage legalisation process for undocumented migrants, accompanied by improved measures to reduce the number of visa overstays and to respond to demands for skilled foreign labour, set important parametres for a pathway to citizenship and for an orderly process of integrating foreign labour into the U.S. economy with fewer disruptions.”

Worrying some advocates, however, is that the new proposal makes that path to citizenship “contingent upon securing our borders and tracking whether legal immigrants have left the country when required”. In part, this threatens to offer a retread of the debate that has so polarised U.S. politicians in recent years, with conservatives demanding that the border be “secured” before any broader reforms can progress.

“It sounds like using the word ‘contingent’ means that border protection will again be an obstacle to reform, and the reality is that it doesn’t need to be that,” Vicki B. Gaubeca, director of the Regional Center for Border Rights, a programme by the New Mexico chapter of the American Civil Liberties Union, told IPS.

“I don’t think the American public is aware of how many resources are already deployed along the border, and really you don’t need more Border Patrol agents – we have enough boots on the ground. Instead, we need to shift back to the many other parts of the immigration system that haven’t been updated in decades.”

Gaubeca says that recent years have led to such an increase in the number of personnel along the border that there are now 10 Border Patrol agents per mile. The result is a 40-year low in apprehensions.

“What’s ironic is that immigration is actually less problematic now than it has been for decades,” Jacob L. Vigdor, a professor of economics at Duke University, said Monday.

He notes that the flow of immigrants has slowed “to a trickle” from Mexico, where the birth rate has fallen over the past generation. Such trends, Vigdor says, suggest that the intensity of the Mexican immigration to the United States of the past quarter-century is most likely now a thing of the past.

“To do reform the right way, though, Congress will have to stop obsessing about last decade’s problem – the porous Mexican border,” Vigdor says, “and instead focus on the future, when the United States will be competing with other developed countries to attract the most talented, entrepreneurial workers.”

Reforming the United States’ massive and unwieldy immigration system has for decades been politically explosive on both sides of the ideological spectrum. Although major new legislation was put in place during the mid-1980s, since that time millions of undocumented migrants are estimated to have come into the country.

Those communities have played a significant part in undergirding the country’s economy, but they’ve also galvanised conservative reaction on the issue. A massively heavy-handed response by the U.S. government has not only funnelled hundreds of billions of dollars towards anti-immigration efforts, but also forced illegal immigrants to live shadowed and marginalised lives.

With 70 percent of the country’s Latino population having supported President Obama’s re-election bid, however, a newly bipartisan understanding of the political, economic and humane impetus has now led to an unprecedented legislative push.

On Monday, the U.S. Chamber of Commerce, the country’s largest business lobby group, expressed its “strong support” for the new Senate proposal as a starting point, broadly mirroring sentiment expressed across ideologies on Monday.

“This (framework) represents an important start to the legislative debate, particularly since this is a bipartisan effort and represents a new willingness to work together,” Doris Meissner, a senior fellow with the Migration Policy Institute (MPI), a Washington think tank, and a former commissioner of the U.S. Immigration and Naturalization Service, told IPS.

“The proposal succeeds in attempting to balance the demands for effective enforcement with the practical reality that 11 million people are living and working in this country without legal status and that their situation must be addressed.”

Earlier this month, MPI published the first comprehensive look at how the U.S. immigration complex has grown in recent years. According to that report, Washington spends more on immigration enforcement each year than on all other federal law-enforcement agencies combined, and keeps more people locked up for immigration purposes – around 430,000 in 2011 – than the entire federal prisons system.