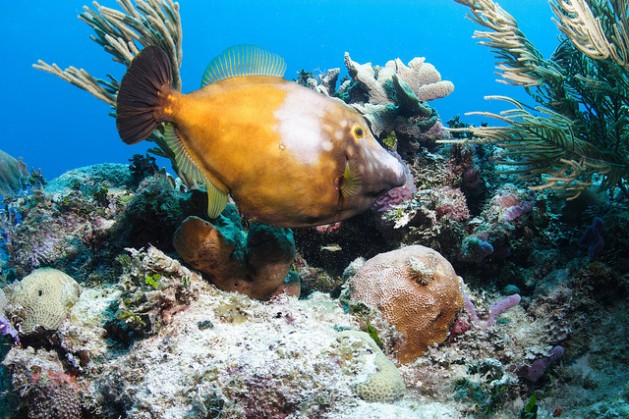 An oil spill has threatened the coral reefs and marine ecosystems in the Milne Bay Province of Papua New Guinea. Credit: Mauricio Ramos/IPS

SYDNEY, Jan 7 2013 (IPS) - Coral reefs and marine ecosystems in the Milne Bay Province of the Pacific Island nation of Papua New Guinea are at serious risk of long-term environmental damage. The reason: an oil spill from a ship that ran aground on a reef on Kwaiawata Island on Christmas Eve, and authorities’ long delay in mobilising an appropriate response to the accident.

“The area has some of the fastest currents in the world and this delay has increased the likelihood of the oil spreading quickly beyond the vessel,” Chalapan Kaluwin, professor of environmental science at the University of Papua New Guinea, told IPS.

“It is too early to assess the full scale of the damage, but there are fragile marine and island ecosystems in this area and the impacts on reefs, marine life and the marine resources that island communities depend on is likely to be long term, rather than short term.” 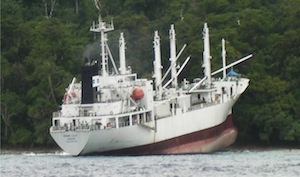 The Japanese-owned 136-metre reefer vessel MV Asian Lily, which wasn’t carrying any refrigerated cargo at the time, was negotiating Milne Bay – a province comprising 160 islands to the southeast of the Papua New Guinean mainland – en route from New Zealand to the Philippines, when the incident occurred.

Milne Bay Governor, Titus Philemon, only learned the news from local villagers several days after the ship ran aground.

Nurur Rahman, executive manager of Maritime Operations at the National Maritime Safety Authority (NMSA), told IPS that fuel oil, which leaked from one of the ship’s tanks, had spread along approximately 115 metres of the island’s coastline.

The remote Kwaiawata Island, which is no more than three kilometres long and located in the Samarai Murua District north of the Jomard Passage – a busy international shipping lane – has a population of about 200 people.  Henry Vailasi, Milne Bay Provincial Administrator, said there weren’t any coastal villages in the direct vicinity of the stricken vessel, but the oil spill had impacted the island’s shoreline.

Milne Bay contains a high diversity of corals and marine life, including more than 1,000 species of fish, 630 species of molluscs and 360 species of hard coral, as well as seagrasses and mangrove forests.  Coral reefs are vital to the livelihoods of local communities, providing habitats for fish and protection to island coastlines. Seventy percent of households in the Samarai Murua District depend on fisheries and other marine resources for subsistence.

In a public statement the NMSA said a Papua New Guinea tugboat has been at the site of the MV Asian Lily since Dec. 27 and a team of international salvage experts was currently onboard the vessel with its crew.

Representatives of the ship owners met with local villagers last week regarding the incident, a meeting that will likely be followed in due course by a consultation between national and provincial authorities and affected communities.

A spokesperson for Pacific Towing PNG Ltd, which is working to salvage the vessel, said the oil leak had been contained and the scale of the damage to the vessel was being assessed. Preparations are currently underway for an attempted refloating of the ship on Jan. 10.

On Jan. 5, the International Tanker Owners Pollution Federation, which has been engaged to advise the government on how best to address the oil spill, presented a shoreline clean up proposal to authorities in Papua New Guinea.

Milne Bay presents serious navigational challenges to shipping, with hazards including extensive reef systems and many maritime areas not yet properly charted.  The Jomard Passage, which lies to the west of the Louisiade Archipelago in the south of the province, connecting the Coral and Solomon Seas, is plied by up to 1,000 ships, including bulk carriers, every year.  Many are engaged in commerce between the Australian east coast and North Asia.

There have been several maritime mishaps in recent years.  In 2006, the bulk carrier, Zhi Qiang, with a cargo of 40,000 tonnes of raw sugar, ran aground on a reef in the Louisiade Archipelago during a voyage from northern Queensland, Australia, to Korea, releasing heavy fuel oil and raw sugar into the sea.

Vailasi told IPS that the provincial government was seriously concerned about the level of guidance and monitoring of ships through Milne Bay and the Jomard Passage.

“This vessel did not have a pilot onboard at the time it went aground,” he said. “We want the region to be a compulsory pilot area and we have asked the NMSA to advise us on how this can be done.”

A recent National Marine Pollution Risk Assessment conducted by the NMSA and PNG Ports Corporation, in association with international consultants, reported that the country’s maritime laws need to be updated and aligned with all International Maritime Organisation (IMO) conventions.

The report further stated that until five new marine pollution bills, drafted by the NMSA, are fully enacted, the government’s powers to prevent and control marine pollution from ships, and enforce the payment of compensation from polluters, are constrained.