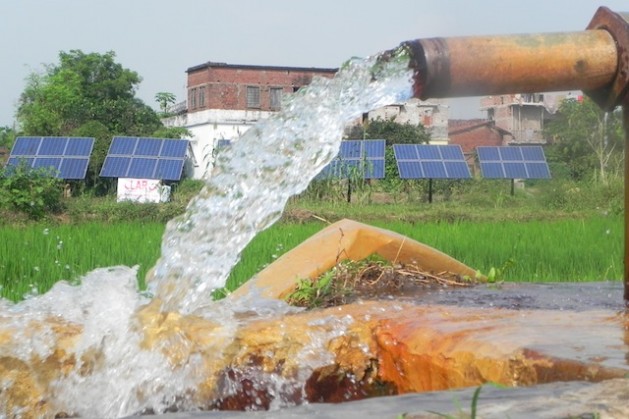 A solar-powered pump in rural Bihar, India, with an array of photovoltaic panels in the background. Credit: Kartik Wahi/IPS

ANAND, India, Jan 16 2013 (IPS) - When twenty-nine-year-old Kartik Wahi graduated from the Kellogg School of Management in Chicago, Illinois in 2010, he wasted no time in returning to India to self-finance a start-up company to market solar-powered irrigation pumps.

Working on a shoestring budget together with two partners, the young entrepreneur was convinced that the benefits of this renewable energy initiative would make a huge difference in some of India’s largest agricultural regions.

But few others shared his enthusiasm for innovation, and three years down the line a myriad obstacles still stand in the way of the pumps being widely deployed in states like Rajasthan, located in the northwest, and Bihar, which sits on India’s northeastern border.

Solar-powered pumps run on electricity generated by photovoltaics and “have been around for 20 years in India,” according to Tushaar Shah, who leads a policy research partnership between the Colombo-based International Water Management Institute (IWMI) and Sir Ratan Tata Trust, called the IWMI-TATA Programme (ITP).

Still, only 7,000 such pumps are used throughout this country of 1.2 billion people.

In fact, when Wahi’s start-up, Claro Energy, approached the Bihar State Government Minor Irrigation Department with an offer to facilitate the supply of solar pumps to farmers, officials responded saying, “We do not believe in the efficacy of solar pumps.”

In order to prove the worth of using renewable energy for farming purposes, Claro Energy forked out 1.5 million rupees (27,000 dollars) from its base capital to install a demonstration pump on the outskirts of Bihar’s capital, Patna city.

“We targeted Bihar because it is primarily agrarian. Second, there is a severe shortage of grid power in the region, which necessitates the need for expensive diesel-operated pumps. Third, high water tables in Bihar with high solar radiation allows for smaller solar systems, which in turn reduce total costs,” Wahi said.

Although conditions make a strong case for solar-powered pumps in Bihar and all along India’s eastern farming belt, little has been done to install them.

Farmers, meanwhile, are hesitant to try the new technology until they see examples of its success, according to Hemant Lamba, whose Pondicherry-based company Auroville Renewable Energy (AuroRE) won the Ashden Award for Sustainable Energy, also known as the Green Oscar, in 2004.

“A similar mindset surrounded the personal computer’s entry into the market decades ago,” he added.

“No organisation or government department is mandated to certify these products nor are there any regulations in place. This is critical, particularly when so many sellers are already in the market making unsubstantiated claims and promises for their products,” Dhar said.

“What actually deters poorer farmers is when a few burn their fingers. Cheap, spurious (products) are part of this story,” Dhar added.

“Solar pump marketing in India is good at giving out half-information, which is a dangerous trend for its future,” added Prem Kalra, director of the Indian Institute of Technology (IIT)-Jodhpur in Rajasthan.

“India still lacks the technology to test and benchmark solar panels or to monitor performance after a few years’ usage. Solar panels are produced in countries that do not factor in an 80 degrees centigrade daytime temperature or the salinity, the sand storms, the huge difference between day and night temperatures that the desert region of Jodhpur experiences,” he told IPS.

“How can promises be made for a pump life of 25 years?”

“What is also not discussed is that the depth of groundwater in the operational area impacts output and life span of the pump, as well as the inferior quality of panels,” Kalra added.

Wahi, who has approached banks in Bihar that focus on rural credit, said, “Banks would much rather provide credit in large volumes for solar lamps and lanterns each costing as little as 1,500 rupees (30 dollars) apiece, than provide loans for solar pumps.”

“With prices of photovoltaic film falling since 2008, the banks are worried that even if they seize the solar pumps of farmers defaulting on their loans, not much can actually be recovered.”

The solar pump has an unusual cost structure with very high capital investment and near-zero pumping costs. Experts believe the cost of installation makes solar pumps unattractive to small farmers who want to irrigate their own plots or farms.

Proponents of the solar option have pointed out farmers can easily recover the initial investment or loan by independently hiring out irrigation services to neighbouring farmers and charging them fixed, government-approved fees.

Conversely, eight to 10 small farmers in close proximity to one another can form water users’ associations. Utilising a micro-grid at the village level is another feasible economic option.

“Like a tractor is hired out to supplement farmers’ income, solar pumps – in order to be accepted – need to similarly be ‘dividable’ or economically versatile,” Mumbai-based Sanjiv Phansalkar, programme leader at Sir Dorabji Tata Trust, told IPS.

However, Nitya Jacob, programme director for water at the Delhi-based Centre for Science and Environment (CSE), told IPS that environmentalists fear solar pumps could encourage groundwater abuse. “It is imperative to (attach) water extraction metres and control mechanisms to solar pumps,” he added.

Once installed, there can be no external or institutional control of a solar pump’s operating hours. If a solar pump can operate for six to seven hours on a clear day, farmers will try to maximise water withdrawal in order to recover high capital costs and because running the pump is free. In water-stressed regions, this rush to harness all the water possible will prove disastrous in the long term.

Any potential environmental gain such as solar pumps’ low carbon footprint could be offset by their potential for excessive groundwater depletion unless control mechanisms are built in, say green activists.