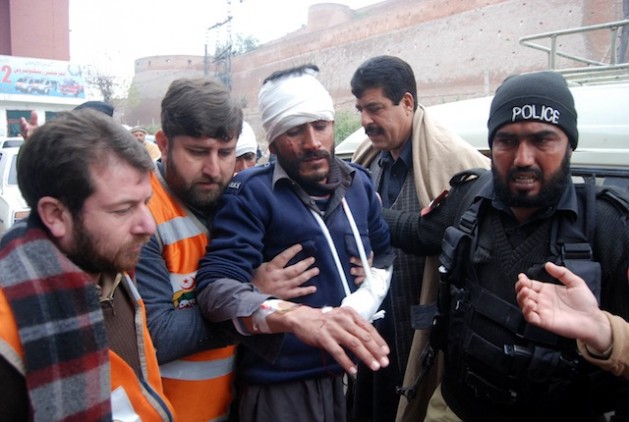 A policeman hurt in a fight with militants. Credit: Ashfaq Yusufzai/IPS.

PESHAWAR, Pakistan, Jan 20 2013 (IPS) - The new round of a terror campaign by Taliban militants against liberal politicians and health workers has led to fresh alarm within government and civil society. Many see this as a ploy to postpone elections due mid-2013.

“A majority of these attacks are happening in the Khyber Pakhtunkhwa (KP) province,” says KP information minister Mian Iftikhar Hussain.

The KP province is ruled by the Awami National Party, a staunch opponent of the Taliban. This has led to the Taliban focusing most of its activities in this province, says Hussain.

Following the killing of nine polio vaccinators in Peshawar and Karachi Dec.17 and 18, seven persons including six female workers and a male doctor from an NGO were killed in Swabi, one of the 25 KP districts on Jan. 5.

What has left some people surprised is that militants attacked a vehicle of the Al Khidmat Foundation (AKF), killing Dr Zakir Hussain, head of its education wing. The AKF is run by the Jamaat Islami (JI) party which is regarded as close to Tehreek Taliban Pakistan (TTP).

The pattern of shootings has left many confused. TTP has accepted responsibility for most bomb and suicide attacks targeting the army, police and public places. The latest attacks have gone unclaimed.

“The Taliban are employing different strategies to sabotage the general election because they don’t want the election to take place peacefully,” Kamran Ali, a political science teacher at the University of Peshawar tells IPS.

The Awami National Party (ANP), which rules the KP, one of the four provinces in Pakistan, has borne the brunt of Taliban attacks. The party has lost 600 of its workers and leaders in terrorism-related attacks, Ali says.

“The TTP is opposed to all democratic and liberal forces. It fears strict action if such parties win the election and form government, he says. The TTP doesn’t want the ANP to win the election again because it has been running a campaign against militants during the past four-and-a-half years of its rule in KP, Ali says.

“The TTP would like to see JI and other smaller religious parties in power in order to implement their agenda,” Ali says. “A coalition government of these two parties in KP had shut its eyes to the Taliban’s activities in Swat during their rule, and soon after the election won by ANP, the Swat Taliban started killing police and others.

“Had the Muttahida Majlis-i-Amal (MMA) – an alliance of Islamic parties – not shut its eyes to the Taliban’s activities in Swat, and had taken action, Swat would never have fallen to TTP,” he says. The Taliban therefore want to keep the ANP away from the election and support religious parties to get a free run, he says.

“A liberal democratic government will take action against the Taliban,” KP Information Minister Mian Iftikhar Hussain tells IPS. “Therefore they (TTP) try their level best to block their entry to corridor of power.”

The killing of political leaders is a Taliban tactic to force opponents out of the election process and get people of their choice elected, Hussain says. “The only agenda of Taliban is to sow political chaos ahead of elections.”

The killing of an ANP leader in a suicide attack Dec. 19 shows how TTP deals with rivals, Hussain says. “Bashir Bilour aggressively campaigned against the Taliban. He turned up at the site of every bomb attack in the province and condemned them.”

Hussain’s only son Mian Rashid Hussain was shot dead by militants in April 2010.

“The recent strategy by the TTP to hit the political leaders and scare people away from public meetings is a ploy to force liberal politicians out of the elections,” he says. “The TTP would never want the ANP to get elected. The TTP knows that the ANP would create problems for it.”

The ANP leadership is prepared for talks nevertheless, he says. “We know that the militants are behind all sorts of terrorism, but even then we are ready to go to the negotiating table provided they end violence for the sake of the country.”