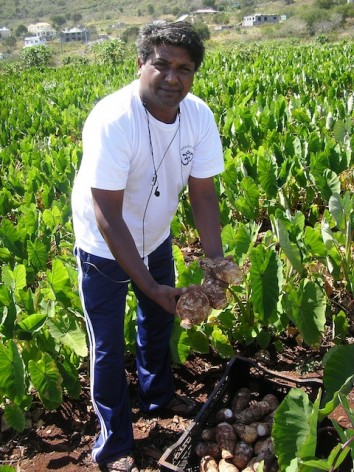 PORT LOUIS, Feb 26 2013 (IPS) - By Kritanand Beeharry’s side are thousands of watermelon seedlings that he has grown in small pots without the use of chemical fertilisers.

As the farmer prepares his half-hectare piece of land in Soreze, near Mauritius’ capital Port-Louis, to plant the two-week-old seedlings, he takes a minute to admire his achievement. “Look at these, they look solid and better grown — it’s the compost,” he says.

It has been about a month now since the government teamed up with a private compost-manufacturer to offer farmers here a 30-percent subsidy for compost made from domestic waste and an increasing number are realising the benefits of going green.

“It’s the same as the manure that we used a long time back,” Beeharry tells IPS.

“This has not been available for decades, because animal husbandry has declined here — we had no choice but to use chemicals, and this has damaged our soil.”

The Compost Subsidy Scheme offered by the government since Feb. 1 means that farmers now pay 50 dollars less per tonne for the compost they buy from Solid Waste Recycling Ltd, a private enterprise that produces compost from domestic waste.

Roopesh Beekharry, manager at the Small Farmers Welfare Fund, which administers the subsidy, says 525 of the country’s 12,000 farmers have utilised the discount since the scheme’s official launch earlier this month.

“And the number is growing everyday,” the fund manager told IPS.

While things started off a bit slowly because of recent rains, he expects interest to pick up again after March, he says.  In total, about 2,000 farmers have bought compost from the plant since it opened in June 2012, according to Solid Waste Recycling.

Tomato farmer Kripalou Sunghoon from Triolet, northern Mauritius, believes that the compost subsidy has come at the right time to challenge the rising costs of chemical fertilisers. While the latter go for 750 to 800 dollars a tonne, compost presents a cheap alternative at only 175 to 200 dollars a tonne.

“We no longer can afford to buy chemical fertilisers,” Sunghoon told IPS. “The subsidised compost will bring down the cost of our inputs, besides giving a new life to our dying soil.”

The benefits of going organic are nothing new to Manoj Vaghjee, president of Resources and Nature Foundation, a non-governmental organisation promoting sustainable agriculture on the island. For the last five years he has been training farmers in biological agriculture and the use of organic compost.

He says that plants grow stronger, resist insects and pests, and farmers obtain a better yield when they use organic compost.

“Our trainees have cultivated 30 to 40 percent more ladyfingers, maize, tapioca, calabash and brinjals with compost than with chemicals per harvest,” Vaghjee told IPS.

“Chemical fertilisers affect the soil, reduce the plant’s resistance to diseases and pests,” he told IPS. “They pollute the rivers and lakes and underground reservoirs and also affect the quality of the vegetables.”

The quality of the compost, however, has not gone undisputed.

Raffick Dowlut, senior extension officer at Agricultural Research and Extension Unit, says he has compared compost made from domestic waste to chemical fertilisers and finds that compost has a relatively low concentration of nutritive elements as opposed to the chemicals.

But he admits that “compost improves the physical, chemical and biological nature of soil and its fertility – chemicals do not.”

Agricultural scientist Ramesh Rajkumar advises farmers not to change their production method immediately. Instead, they should use a mix of 50 percent of compost and 50 percent of chemicals, he said, as the latter supply minerals to the plants.

“The soil fertility is damaged by the use of too much chemicals over such a long time,” he explained, “It should be built slowly.”

Meanwhile, the recycling plant prevents about 100,000 tonnes of domestic waste a year from being dumped in the only landfill on the island, according to Patrick Maurel, chief executive officer at Solid Waste Recycling. Dumped at Mare Chicose, in the south “it would contaminate the underground water reservoirs and release methane that pollutes the air,” Maurel told IPS.

The country’s 1.3 million people produce about 1,200 tonnes of waste daily, or 400,000 tonnes a year, and the government spends around 16 million dollars collecting it and transporting it to the dumping ground, according to the Local Government Ministry.

Citing a 2002 study by the University of Mauritius, Maurel says almost 90 percent of the waste is recyclable and 55 percent can be transformed into compost and used in agriculture.

Back at Beeharry’s melon farm, the green grower looks at his latest transition holistically.

“When we care for the environment, we care for natural resources that are made up of land, water and air. This not only helps us to get a better production, but it also gives us our daily food, now and in the future.”