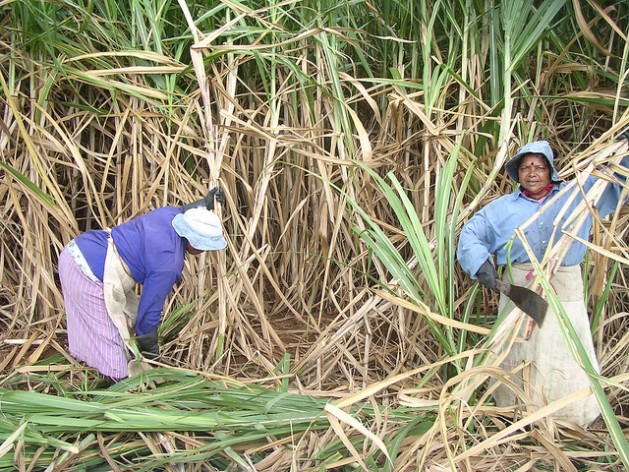 PORT LOUIS, Jun 22 2012 (IPS) - In finding a way to survive a 36 percent cut in sugar prices, Mauritian farmers are not only exporting a variety of fruit and vegetables to the European Union, but they have also begun farming in a more environmentally sustainable way.

This is because a large number of farmers here on this Indian Ocean island have become fair trade certified. Fair trade is a social movement that promotes just terms for farmers and workers and encourages sustainability in the developing world. Fair trade certified products also usually command a higher price than regular ones because of the high standards and ethics involved in producing them.

Mauritius is one of Africa’s largest sugar exporters to Europe, and most of its refined sugar is exported to the EU. But when the sugar price fell over a period of three years by a total of 36 percent at the end of 2010, small farmers here realised that they could still earn a good income and do so in a way that would protect the small island’s environment from harmful fertilisers and chemicals.

“Our income was dwindling. So it was better to be fair trade certified to earn some more money,” said farmer Keshoe Parsad Chattoo.

Products labelled fair trade generally sell well in Europe and the United States because they meet agreed international environmental, labour and developmental standards. There are some 3,000 products that fall under the label, including sugar, coffee, spices, vanilla and bananas. Consumers willingly pay more for fair trade products, a premium of 585 dollars per tonne in the case of sugar, above the normal price of about 525 dollars per tonne.

Jean-Philippe Zanavelo, Fair Trade International’s representative for Mauritius, said that producers are at the heart of the fair trade concept.

“Consumers are willing to pay more for good-quality products, and this extra money goes directly to producers. They get good markets and attain sustainable development,” he told IPS.

As a result many local farmers are joining the movement here.

“We are now producing and exporting good-quality food free of chemicals that trouble our health and our environment, and earning additional income,” said Kishan Fangooa, a farmer and secretary of the Long Mountain Pineapple and Allied Growers Cooperative Society Ltd. The society has almost five hectares of land under pineapple cultivation in Long Mountain, northern Mauritius.

Becoming fair trade certified is an exacting and difficult process, some farmers told IPS. But many feel it is worth the effort.

“The criteria may be constricting, but it helps improve the quality of our produce and we are determined to earn an increased income,” Fangooa told IPS.

Producers have to be audited by the standard-setting body, Fair Trade International, and an independent certification body to ensure that the agreed standards are met. In agreeing to fair trade, producers have to abide by criteria that include democracy, transparency, good governance and the protection of the environment.

“Apart from regular audits and inspection of the fields, I understand there are laboratories in Europe that keep checks on the quality of our produce that we export. They’ll know if we use prohibited products and they’ll reject our exports,” he told IPS.

“We better observe the regulations and get our increased income,” he added.

Rajen Hemoo, secretary of the Victoria Cooperative Society, said that the fair trade concept was good for small producers and the requirements were not difficult to comply with.

“It’s a new model of operation, a disciplined way of producing. It’s an old concept but we discovered it only recently,” he said.

“There are both direct and indirect benefits to this concept. Our inputs are subsidised, we obtain cash grants and loans at low interest rates. We also get involved in the community in our region,” he said from his sugar cane field in Congomah, northern Mauritius.

Farmers are required to share some of their proceeds with their local communities by funding social activities or aiding in the development of villages. There is, however, no prescribed amount of how much they should donate.

But not everyone is keen to be fair trade certified here. In the south of the island, members of the Southern Planters Association (SPA) are reluctant to join the movement.

“We produce the canes and the sugar. Yet, the communities get the extra money and manage it for themselves. We thought the extra money obtained from fair trade would go into the pockets of small producers directly to help them manage the rising costs of production,” SPA president Gassen Modely said of the requirement for producers to give back some of their profits to the community.

Modely does not believe farmers will benefit from the fair trade concept after they pay audit fees of between 1,000 to 3,500 dollars annually per cooperative society in order to remain certified. Currently these fees have been subsidised by government. “This is very high,” Modely told IPS.

“Such high audit fees and to get peanuts in return. Many people do not know that the government has supported us to pay the audit fees for fair trade. That’s how we make extra money. Had we incurred the expenses ourselves, we would not have seen any profit in this concept,” he told IPS.

He said that he finds that the criteria are rigid and interferes with the way things have always been done here.

“A chairman’s mandate under the cooperative legislation is three years but nobody abides by it. Many chairmen have been here for the past 20 years. Now, Fair Trade International is insisting that it be only a three-year mandate. Cooperative members are not happy.”

Business and Cooperatives Minister Jim Seetaram said that they want small producers to have the choice between traditional farming and farming with fair trade policies, which brings about sustainable development. He believes Mauritian farmers can also export litchis, flowers, fruits, lemon and honey under the fair trade label.