As the Taps Run Dry in Mauritius

PORT-LOUIS , Mar 19 2012 (IPS) - Rani Murthy, a public officer who lives in Plaines Wilhems, central Mauritius, wakes at three every morning to wait for the water tanker from the Central Water Authority so that she can collect water for cooking and household chores. 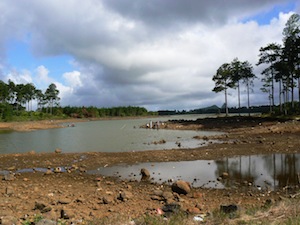 Mauritius has been experiencing a water shortage for months as the anticipated summer rains are yet to arrive with the season close to its end. Credit: Nasseem Ackbarally/IPS

“This is not a life. Waking at three to collect water, doing household work before seven, and then going to work. I come back at night, look after the kids, prepare food, have dinner, go to sleep around midnight and get up again at three. If not, we will stay without water,” says Murthy.

But scenes of people queuing for water are recurrent on several parts of the island. As local reservoirs run dry, running water has become a luxury here.

The shortage has had widespread implications across the island as farmers, particularly in the north, can now only cultivate a fraction of their land. Kreepallou Sunghoon, secretary of the Small Planters Association, says farmers who used to cultivate vegetables on 10 to 15 hectares pieces of land only use less than a third of that now.

“Agriculture is no longer profitable,” he laments.

Kritanand Beeharry, chairperson of the Mauritius Agricultural Marketing Cooperative Federation, says that many farmers have resorted to harvesting rainwater on the roofs of their houses, which they use to irrigate their plantations.

“Some are building basins on their land to collect rainwater, while others buy it from private trucks roaming their area that have collected the water from rivers,” he says.

The country has been experiencing a water shortage for months and it seems as if there are no signs of it abating, as the anticipated summer rains are yet to arrive with less than a month of the season left.

Normally, the whole island gets two-thirds of its usual rainfall or 1,344 mm from November to April.

“More than half of the summer period is gone and we got only 373 mm of rain over the whole island. It always rains a lot between January and March, but this year we got only 88 mm of the normal 261 mm in January,” says Rajen Mungra, director of the Mauritius Meteorological Services.

In the centre of the island where the Mare-aux-Vacoas reservoir, the biggest of the five on the island with a capacity of 27 million cubic metres, is located, the long-term rainfall mean is 2,173 mm. However, the area received only 549 mm this summer and the water level in this reservoir, which services the country’s main towns and almost half its population, stands at 29 percent.

In other regions, production from reservoirs and boreholes has also fallen by more than 50 percent, according to the CWA. River levels have dropped by almost 70 percent on several parts of the island, according to the country’s Water Resources Unit.

“We are facing a severe hydrological drought. We are worried,” Prem Saddul, chairman of the CWA, told IPS.

The CWA is transferring water from reservoirs of higher capacity to ones of lower capacity and are identifying new boreholes to be put into operation. Five new filters have been installed on rivers that previously flowed into the sea to filter the water and redirect it to the reservoirs.

The government is also offering a grant of about 100 dollars to every household earning less than 330 dollars for the purchase of a water tank.

Meanwhile, the CWA is rationing the water supply in order to maintain the service to the population as long as possible.

“We ensure that every household receives a minimum amount of water daily,” says Jeet Munbahal, the chief engineer at the CWA.

The CWA has issued regulations restricting people from wasting water by using a hosepipe, sprinkler or any similar apparatus. Mauritians have even been warned against washing their vehicles, pavements, and buildings.

Those domestic consumers who contravene this regulation shall, on conviction, be liable for a fine not exceeding 1,800 dollars and a term of imprisonment not exceeding two years. For other consumers the fine is larger though it does not exceed 7,200 dollars.

Despite the efforts by the CWA to conserve water and a public campaign calling for Mauritians to save the precious commodity, Saddul says most of the population is not complying and water is still being wasted.

Saddul says CWA officers have been monitoring petrol stations to ensure that they stop washing vehicles.

“Our officers are checking on them regularly. We are seeking the collaboration of the public who can also inform us through our hotline about people wasting water. We are not punishing people, but discouraging them from wasting water,” he adds.

Even the country’s national Police Commissioner has instructed police officers to monitor water wastage during patrols.

Meanwhile, Kheswar Beeharry-Panray, director of the Environment Protection and Conservation Organisation, believes the lack of rainfall in Mauritius is due to climate change.

“The water cycle has changed in the world and so Mauritius cannot expect to get the same rain pattern like 20/30 years back,” he says, further estimating that too many trees have been cut down in the country’s catchment areas.

“This explains the scarcity of rains. It is now better for us to increase our stocking capacity – on rooftops, in tanks, small dams, everywhere,” Beeharry-Panray says.