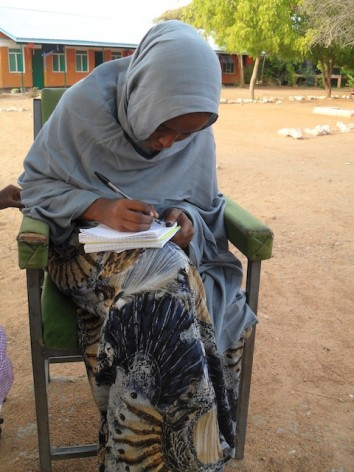 NAIROBI, Feb 6 2013 (IPS) - For the Samburu community in northern Kenya it was bad enough that Julius Lekupe had not sired a son – it was even worse that his eldest daughter refused to be “cut”.

“Women are like property here. We circumcise them and marry them off – some as young as 10 years old,” Lekupe told IPS.

He knew it was only a matter of time before his 16-year-old daughter, too, was going to have to undergo the ritual against her will.

“She begged me to support and protect her. It was a tough decision, but I agreed. I sent her to Nairobi to live with a friend,” Lekupe recalled.

He is among an increasing number of men belonging to ethnic groups that practice Female Genital Mutilation/Cutting (FGM/C) who have begun to speak out against the now-illegal practice in this East African nation.

Legally, the tide turned in Kenya in 2010, when parliament adopted the Prohibition of Female Genital Mutilation Act, which stipulates that offenders serve up to seven years in prison and can be fined up to 5,800 dollars – a huge sum in a country where the average monthly wage is 250 dollars.

The combination of national legislation and shifting attitudes at the community level seems to bare fruit.

On Wednesday Feb. 6, the United Nations Children’s Fund (UNICEF) and the U.N. Population Fund (UNFPA), together released new numbers that show FGM/C is becoming less prevalent on the continent and particularly among the younger generation of girls.

In a joint statement, the agencies highlighted Kenya as an example of sharp decline in the region, saying that “women aged 45 to 49 are three times more likely to have been cut than girls aged 15 to 19.”

“This progress shows it is possible to end FGM/C,” underlined UNICEF executive director Anthony Lake, adding that “we can and must end it to help millions of girls and women lead healthier lives.”

Increasingly, men are assuming active roles in initiating this cultural shift, as UNFPA’s 2012 report “Accelerating Change” points out. In addition to fathers like Lekupe, who wish to protect their daughters, young men across Kenya are speaking out publicly to announce their preference to marry uncut girls, according to the report – a significant development in a country where FGM continues to be a prerequisite for marriage in some communities.

According to Ibrahim Shabo, an FGM/C activist from Isiolo — a town in northern Kenya where the pastoralist community is notorious for practicing FGM/C  — this stance by Muslim leaders is particularly significant when it comes to influencing Kenyan Somalis in northern Kenya, who have a FGM/C prevalence rate of 98 percent.

In Kapenguria, Rift Valley, the local council of elders has joined the growing chorus against FGM/C by making a public declaration to abandon the practice in 2011.

“This is a community that is known to practice extremely brutal forms of FGM/C,” Philipo Lotimari, a community leader in the town, told IPS. He went on to describe the practice that involves opening up a girl’s vagina with the horn of a cow the first time she has sex following her circumcision.

The stance of the all-male council has shifted attitudes, according to Lotimari, by sending “a collective message that it is okay to marry a girl who isn’t circumcised.”

His younger sisters have not been circumcised, he added, because he wanted them to have an education and not be married off.

But not all men have altruistic reasons for preventing the practice.

Omar, a father from Garissa, said that male youths in his region are against FGM/C, because they feel they themselves have become “victims” of it.

“If the girl is sewn so tight, you can neither penetrate nor enjoy sex. So marriages are ending because of it,” he said.

Dr. Salim Ali, a reproductive health physician in northern Kenya, told IPS: “Sex with (women who have undergone FGM/C) is uncomfortable and they do it as a duty. They rarely reach orgasm and make sex tedious. Women who haven’t been cut enjoy frequent sex – sex with them is enjoyable.”

In other cases, men whose wives suffered complications at birth were forced to pay for emergency operations to save their wives and children, Grace Gakii, a gender activist who has worked in FGM/C-practicing communities such as the Maasai’s and the Pokot, told IPS.

“The men are forced to sell their livestock to raise the money for surgery. This is a problem because of the attachment they have to their herds,” said Gakii.

While not all men who speak out against FGM are acting as women’s allies, their support for the issue at large is nevertheless crucial for accelerating the eradication of the practice.

“If more councils of elders and young men continue to show support for an FGM-free society, Kenya will be heading for zero tolerance of FGM.”