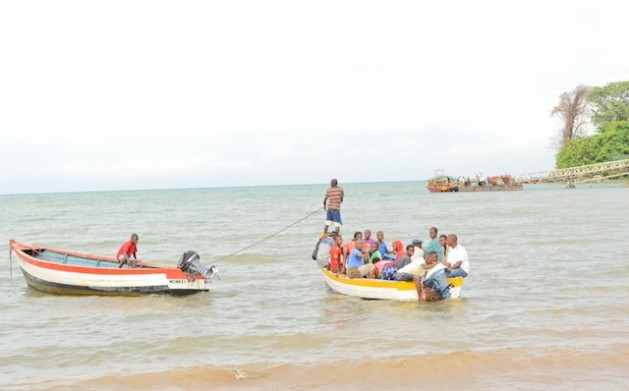 KARONGA, Malawi, Feb 27 2013 (IPS) - Since he was nine years old, Martin Mhango from Karonga village in northern Malawi has known no other livelihood than fishing. And for the last 33 years he has been fishing freely on Lake Malawi – that is, until last October when he was detained and beaten by Tanzanian security forces.

“They stopped me, dragged me to the beach where they beat me up and detained me. They told me that I had trespassed and was fishing on the Tanzanian side,” Mhango, 42, told IPS. “I was told to never fish on their side again.  He had been fishing on both sides of the lake for years, he said, just as Tanzanian fisherfolk did.

The dispute over Africa’s third-largest lake, which is also known as Lake Nyasa in Tanzania, dates back half a century.

Malawi claims sovereignty over the entirety of the 29,600-square-kilometre lake that straddles the borders of Malawi, Mozambique and Tanzania.

Meanwhile, Tanzania says 50 percent is part of its territory.

The dispute between both southern African countries reignited when Malawi awarded exploration licenses to United Kingdom-based Surestream Petroleum in 2011 to search for oil and gas on Lake Malawi.

Tanzanian authorities want Surestream Petroleum to postpone any planned drilling on the lake until the dispute is resolved. But Malawi has remained defiant.

So far, oil companies have yet to begin drilling and are still exploring the centre of the lake, which has been cordoned off.

But several fishing families like Mhango’s that work along Songwe River in northern Malawi are already caught up in this row, making the fisherman fear that the two countries will eventually go to war.

After the October incident, Mhango has been careful not to venture into the waters on the purportedly Tanzanian side, which has affected his livelihood.

A reduced catch has lowered his income from over 286 dollars per month to just 142 dollars.

“I have all my life been a fisherman and this is the first time I am unable to fish freely on the lake and I fear for my future,” he said.

Josiah Mwangoshi, 52, remembers belonging to two villages when he was growing up – one on the Malawian side and another on the Tanzanian side.

“My village is right along Songwe River and I remember that when the river used to shift its course, we would migrate to the Tanzanian side and later on return to the Malawian side when the river shifted again,” Mwangoshi told IPS.

“But I am now afraid that the Tanzanians may arrest me. I can no longer live and fish on the Tanzanian side where I also have a family, because it’s now clear that the dispute is very deep,” he said.

Reports of alleged beatings and harassment of Malawian fisherfolk in October last year forced Malawi’s President Joyce Banda to cut off the dialogue that had started between the two countries.

The wrangle deepened when last November Tanzania published a new map shifting the boundary between Tanzania and Malawi to the middle of the lake.

Banda, angry with the new map and Tanzania’s harassment of fisherfolk, called a press conference in the capital Lilongwe a few days later and announced that she had protested to the United Nations General Secretary and cancelled a planned state visit to Tanzania.

But Tanzanian High Commissioner to Malawi, Patrick Tsere, defended his country’s actions saying that no Malawian fisherfolk have ever been harassed in Tanzanian territorial waters.

“Tanzania’s security forces have never engaged in such behaviour. It’s rather us who have been worried that Malawian planes have been seen flying into Tanzania territory without our permission,” Tsere told IPS.

Many believe that the row over the lake has the potential to worsen if significant oil and gas is discovered.

“This dispute has been around for over 50 years but it has heightened and entered the public domain now because of the potential of oil and gas discoveries,” Udule Mwakasungura, the executive director for the Centre for Human Rights and Rehabilitation, a Malawian NGO, told IPS.

“Lake Malawi contains more than 2,000 different fish species — our worry is that oil exploration and its subsequent drilling will affect the fresh water ecosystem,” he added.

The lake has been witnessing a decline in fish stocks from 30,000 metric tonnes a year to just 2,000 tonnes over the last 20 years, according to a recent Ministry of Agriculture report read in parliament this February.

Last month, both countries presented their position papers after agreeing that the dispute would be mediate by the Southern African Development Community former heads of state, also known as the African Forum.

“We agreed with Tanzania that we will hand over the mediation to the African Forum and so far we have both presented our position papers. A mediation process should commence before the end of this month or early March,” Malawi’s Secretary for Foreign Affairs and International Co-operation, Patrick Kabambe, told IPS.

Mhango and Mwangoshi have pinned all their hopes on the mediation efforts.

“I have been following news reports about this on the radio and my prayer is that the former African leaders resolve this issue once and for all,” said Mwangoshi.

Mhango has similar hopes. “All I want is to go back and start fishing freely on this lake — because without that, my family’s future is doomed.”