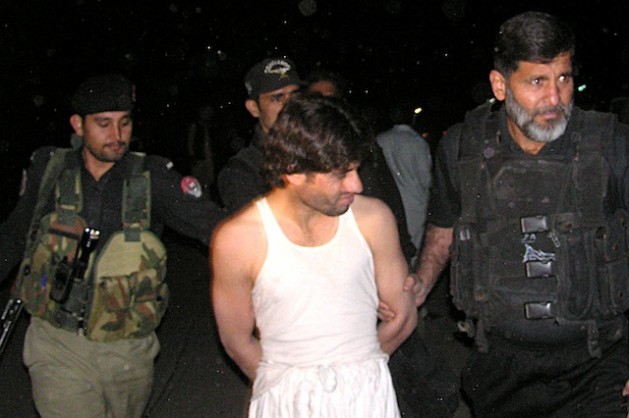 The police have been cracking down on Taliban recruits. Credit: Ashfaq Yusufzai/IPS.

PESHAWAR, Feb 19 2013 (IPS) - Taliban militants have been losing grip over the handling of their would-be suicide bombers. Of late they failed to carry out their missions as planned.

The anti-militancy offensives against the Taliban coupled with the killing of many experts who trained would-be suicide bombers have meant that many would-be bombers are stuck with shabby devices and are therefore unable to carry out other acts of terror, experts say.

The botched attack on a base at the Bacha Khan International Airport in Peshawar Dec. 15 is a glaring example. “The vehicle in which five terrorists were traveling exploded far from the security installations and personnel. The plan was for the militants to enter the airport in a suicide attack,” Brigadier Khalid Shah told IPS.

Reports said that the following day, five others on a suicide mission were killed in nearby Pawaka village. They were held up all night and had no contact with their handlers. The place they were sent to was unfamiliar to them because their handlers couldn’t reach them in the face of tight security.

“They had been sent by Tehreek Taliban Pakistan to the airbase in Peshawar,” said Shah, who fought against the Taliban in Federally Administered Tribal Areas (FATA) until his retirement in March 2012.

Security expert Major (retired) Shehrayar Khan says the killing of Taliban’s explosives expert Badr Mansoor and trainer of suicide bombers Qari Hussain Mehsud and others has had a tangible impact on the Taliban’s capacity to handle explosives and to train and equip suicide bombers.

The Taliban’s capability to hit targets with precision has decreased, he said. “The Taliban have been trying their level best to minimise civilian casualties in terrorist attacks and only hit forces and members of the Awami National Party and other opponents. But they have failed to do so.” said.

The Taliban have been facing scathing criticism for killing and injuring women, children and other innocent people in bomb and suicide attacks. Their efforts to single out their opponents and spare others have not been successful.

An explosives expert, Qari Hussain, had successfully trained newly-recruited young boys – introducing them to guns and explosives, brainwashing them, and playing a vital role in planning strikes, Major Khan said.

“The young guys from 10 to 18 years were indoctrinated with the help of videos and lectures in training camps in Waziristan that they would go to paradise after they kill army and police people in suicide attacks. This way, the Taliban killed hundreds of security people.”

The murder of Mansoor, who acted as a suspected bridge between al-Qaeda and Taliban groups in Pakistan and Afghanistan, and coordinated terrorist attacks, also came as a severe blow to the Taliban. Mansoor reportedly masterminded attacks on Ahmadis in Karachi and Lahore that killed about 100 people May 2010. Ahmadis are from a sect disowned by orthodox Muslims.

Jamil Khan from the special branch police told IPS that the failure of two suicide bombers to hit their target in Peshawar Dec. 2 was apparently due to lack of training and logistics support. Major Shehryar Khan said the surrender of another would-be bomber and his alleged handler in Peshawar Nov. 20, and the killing of a would-be bomber in Dera Ismail Khan Nov. 23 before a Muharram procession were clear manifestations that Taliban militants are losing their grip to use bombers as planned.

The special branch police say the Taliban have particularly lost experts who could manufacture explosives-laden jackets.

“The police have been fighting terrorism since 2005, they have come to know the Taliban’s ways of planning operations, and are now in a better position to thwart such bids,” Khan said.

A woman sent by the Taliban to target former chief of Jamaat-e-Islamic (JI) Qazi Hussain Ahmed blew herself up after Qazi’s convoy had passed by Nov. 19 in Mohmand Agency of FATA. Five people were injured in the attack.

“Now the Taliban use women and children in terror acts because they have run out of suicide bombers,” said Mian Iftikhar Hussain, information minister for the northern Pakistani province Khyber Pakhtunkhwa (KP). “They now send untrained people who are either arrested in time or who detonate their explosives at the wrong time.”

The Taliban are also running out of people to carry out these tasks, he said. “Militants don’t find enough ideologically motivated people who volunteer to become suicide bombers. Due to this many have been arrested in the past few months,” he said.

Shafqat Malik, head of the bomb disposal squad in KP said they had foiled more than 700 sabotage bids in 2012 because of the effectiveness of his department and the declining capacity of the terrorists. “The Taliban are no longer a massive threat because they can’t organise attacks like they did previously.

“We now have state-of-the-art equipment, snipers and gadgets that discover the IEDs. The government’s restrictions on the supply of the fertilisers have helped decrease the acts of terrorism.”