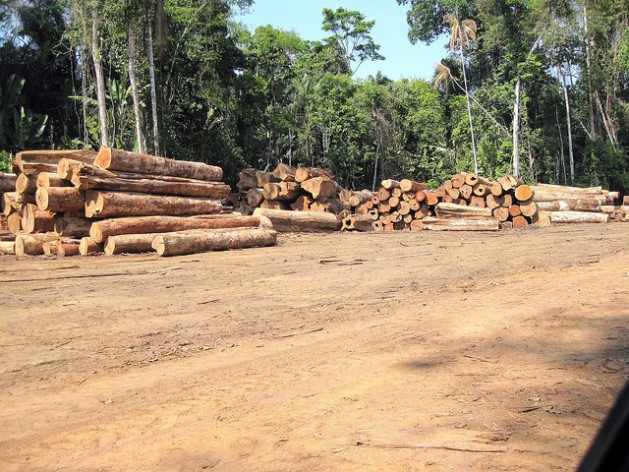 The Bank's new approach included the use of industrial logging. Here, lumber from the Amazon's Antimary forest is readied for transport. Credit: Mario Osava/IPS

WASHINGTON, Feb 6 2013 (IPS) - Officials at the World Bank are forcefully rejecting a new internal evaluation that is highly critical of the institution’s decade-long forest policy, expressing their “strong disagreement” with some assertions in the report.

The assessment, written by the Independent Evaluation Group (IEG), the World Bank Group’s auditor, warns that expectations for poverty reduction as envisioned in the bank’s 2002 Forest Strategy “have not yet been met”. The report is particularly critical of the bank’s use of mass-scale logging concessions as a forest-management strategy and of a lack of projects that promote community involvement in the oversight of forests.

While the full IEG report has not yet been made public, draft copies of both the report and management responses were scheduled to be discussed at the bank’s Washington headquarters on Monday. (Leaked copies of both documents can be found here and here.)

The draft response from the bank’s management warns that the audit “contains a number of inaccuracies and misleading assertions that are based on generalizations about the forest sector rather than on an evaluation of the (World Bank Group’s) own work in this sector.”

In addition to expressing frustration with the IEG’s research methodology, the bank’s responses are particularly vociferous on the charge that its forest governance reforms – particularly regarding concessions – may not have led to sustainable and inclusive development.

The management warns that bank concession policies should not be looked at outside of their comprehensive context as they constitute “one part of a suite of reforms”, and that “an extensive body of literature” already exists on concession reforms, for which further re-appraisals would offer “little added value”.

In addition, the bank says that the IEG missed out on some particularly important reforms, such as a new requirement mandating third-party verification of sustainable forest management prior to any bank investment. Nor does the evaluation substantively explore the contributions of a bank initiative called the External Advisory Group on Forests, aimed at offering monitoring and oversight of the bank’s forest investments.

Both the frankness of the IEG report and the force with which the World Bank management have responded have surprised some observers.

“The evaluation was surprisingly forthright, but it’s important to realise that this issue is particularly touchy as the bank attempts to position itself as a major player in responding to global climate change,” Joshua Lichtenstein, forest programme manager with the Bank Information Center, a Washington watchdog, told IPS.

“The corollary here, however, is that the bank’s approach of focusing on industrial timber concessions doesn’t appear to have worked. While there’s been some progress in improving the legal framework, the IEG is saying that those programmes have led neither to sustainable, inclusive economic development nor to decreases in deforestation or sustainable use of forests.”

As put in place in 2002, the World Bank’s Forest Strategy was aimed at both poverty alleviation and the safeguarding of local environments.

One important component of this new approach is the use of industrial logging, for which the 2002 strategy lifted a previous ban. By focusing instead on reforms such as increased management and certification activities, the policy aims at providing both local employment and national-level revenues.

The IEG evaluation, however, is clear in its view that this approach does not appear to have delivered results.

“We’re in no way opposing World Bank involvement in the forest sector – indeed, the bank has lots of small, community-driven development projects that are successful,” Lichtenstein says.

“But that’s kind of the point: there are other models, good alternatives, available, and the bank now needs to give up on this big industrial logging concession model. That was clearly important and worth trying, but it hasn’t panned out.”

By inserting itself in the logging sector in tropical forests, the World Bank had hoped it could bring its good offices to bear on an already existing industry and make it better. Thus, while the bank is not directly financing these companies, it is providing the legal and policy framework to make the sector function in its current form.

Yet some argue that the bank’s involvement has made certain situations worse, including pushing industrial logging operations into remaining primary rainforests.

“The allocation of large logging concessions, millions of hectares, to mostly foreign companies is still the prevailing model in many countries in the Congo Basin to manage forests,” Susanne Breitkopf, a Washington-based senior political adviser on forest and climate with Greenpeace International, told IPS, referring to the vast tropical rainforests that cover six countries in Central Africa.

There have also been widespread allegations of fraud and illegal activity. Breitkopf says that a recently released report, funded by the European Union and other donors, on logging in Congo found that nearly all major companies in the sector were involved in illegal activities, including logging outside of legal limits, non-payment of taxes and massive fraud.

Meanwhile, many have complained that community forestry programmes in these areas have been either an afterthought or entirely absent. On the issue of participatory forest management, the new IEG assessment suggests that the bank is “neglecting” the informal sector.

In response, the bank agrees that “Effective community participation is essential for improving the management of protected areas … (but questions) the evaluative basis for IEG’s conclusions that the Bank is not already doing this.”

“The IEG report is a very good starting point,” Breitkopf says, “offering a great opportunity for the bank to seriously reassess its approach and develop new priorities in land rights, livelihoods and protection of ecological systems, especially with regard to the role that forests are playing in protecting us from devastating climate change.”

Yet she is pessimistic that the new evaluation will lead to significant change. She also notes that the International Finance Corporation, the World Bank Group’s private sector arm, currently in early talks with a French timber company called Rougier, is currently contemplating re-engagement with industrial logging in the Congo Basin for the first time in three decades.

“Unfortunately, even as the evidence has increasingly mounted over the years, this has not been taken into account,” Breitkopf says. “From what we’ve heard from management, there still seems to be a resistance towards the recommendations from the IEG. And frankly, we don’t understand this, given that this is such a good chance to find better solutions.”