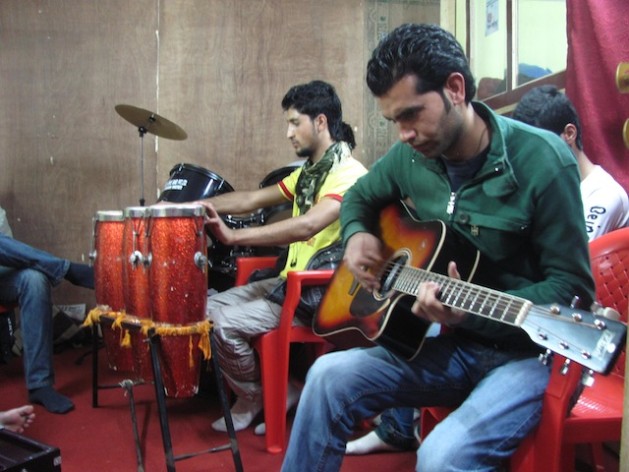 SRINAGAR, Mar 23 2013 (IPS) - The girl band in Kashmir was silenced; the male bands are running into fears of another kind of silence.

After tourist arrivals started picking up a couple of years back, 27-year-old Aamir Ahmad put off renovation plans for his home and began to polish up the instruments in his music studio. New business had arrived.

“During the past two years we did good business thanks to satisfying tourist arrivals,” Aamir, who heads a band called Strangers told IPS. Through winter the band prepared for the upcoming tourist season this summer, but now they are not so sure. “Violence, curfews and strike calls have hit the streets of Kashmir,” he said.

Summer brought tens of thousands of tourists the past two years, and the band also thrived on marriage parties. For the summer ahead, the uncertain security scenario could mean disruptions, said a musician with the band who did not wish to give his name.

“Because of limited opportunities in Kashmir, our source of income is really the marriage parties and shows at tourist centres. This seems impossible this summer given the fresh unrest.”

Kashmir has faced renewed street anger since Afzal Guru who was convicted in the 2001 attack on the Indian parliament was hanged Feb. 9 in New Delhi’s Tihar Jail.

Three people have died in clashes, and dozens others injured, including several policemen.

“Frequent curfews and strike calls pose a huge threat to the future of Kashmiri youth who seek self-employment in the absence of government jobs and industrial growth,” Prof. Nissar Ali, economist and consultant to the Kashmir government told IPS.

There are about 20 bands in Kashmir which depend on summer months for business and livelihood. Among these are Valley Youth Expression, Strings, Valley Boys, Valley Guys, Expression, Sign Band, Janoon, Blood Rocks, and Divine Connection.

Mohammad Rafiq runs a music academy in Srinagar with 50 students. He has been able to hold classes just a few days over the past several weeks.

“We simply can’t do anything about this,” he told IPS. “We keep our fingers crossed that the situation will get better.”

For Rafiq and his fellow professionals, singing for a livelihood was never an easy decision in a place like Kashmir. “We don’t have recording studios and production companies here. So we depend on performing,” said Rafiq, who owns the band Valley Boys.

And all music is in the hands of boys. Singing by girls in public is frowned upon. “That is why we don’t accept female candidates in our band or in our music academy,” Rafiq said.

Last month a music band comprising three teenage girls had to give up performing in public. This followed a barrage of disapproving comments on Facebook against young girls singing in the presence of males. A religious leader issued a fatwa against the girls band.

The Grand Mufti Bashir-ud-Din said Islam does not allow females to indulge in practices which expose them to the gaze of males.

“I want Kashmiri girls to take up dignified jobs like excelling in education. They are not for singing and dancing,” the Mufti told IPS. He has issued many decrees in Kashmir over the past few years.

In 2007 he caused a stir when he issued a fatwa against a Kashmiri politician and former chief minister of Indian Kashmir, Ghulam Nabi Azad after Azad asked people to follow the example of Mahatma Gandhi. The mufti declared that call “un-Islamic” and said Muslims were only supposed to emulate Prophet Muhammad, and demanded an apology from Azad.

His fatwa had no effect on Azad, but the one on the girls band worked. The three young Kashmiri girls were pushed off stage, and their band was wound up barely a month after performing at a music competition in Srinagar, capital of Indian Kashmir.

They had stood first in the competition – they were the first and only all-girl music band in Kashmir valley. The girls – vocalist-guitarist Noma Nazir, drummer Farah Deeba and guitarist Aneeka Khalid – had formed their rock band Prakash (Light) only in late 2012.

The boys and their bands have little support to offer to the dismissed girls. All the male band members IPS spoke to said they would respect the fatwa. “If our society or elders do not accept it, we should not interfere,” said guitarist Javid Ahmad.