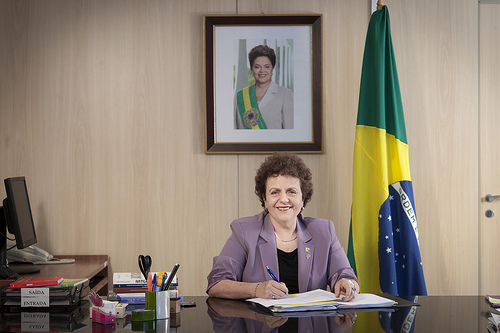 Minister of the Secretariat of Policies for Women Eleonora Menicucci, in her office. Credit: Courtesy of SPM

RIO DE JANEIRO, Mar 11 2013 (IPS) - The story generally begins in Brazil’s hinterland, with a pretty, young woman from a disadvantaged background and with little formal education, who is drawn in by false promises and ends up in a sex trade network that stretches overseas.

The disturbing trend has begun to be addressed by the government, the justice system, the legislature and even a popular soap opera, with encouraging results.

Sex trafficking is such a complex phenomenon that there is little systematic, reliable data on it. The United Nations Office on Drugs and Crime (UNODC) estimates the number of victims of what the U.N. describes as modern-day slavery at 2.5 million people or more.

In Brazil, according to the presidency’s Secretariat of Policies for Women (SPM), 475 cases of trafficking were documented between 2005 and 2011. Of that total, 337 of the victims suffered sexual exploitation, while the rest were subjected to slave labour.

“The majority of the women are young, between the ages of 18 and 30, and are in a vulnerable situation: they are low-income, they didn’t have access to education, and they had difficulties finding work,” SPM Minister Eleonora Menicucci told IPS.

“That is why they accept what look at first glance like excellent job opportunities abroad or in another part of Brazil, believing that they will improve their lives and those of their families,” she said.

The victims are recruited all around the country. But an assessment by the SPM and UNODC indicates that sex trafficking recruitment occurs most often in the northeastern states of Pernambuco and Bahia and the central state of Mato Grosso.

São Paulo, whose capital is Brazil’s largest city, is the state where the largest number of victims from other states are taken, and the main spot from which trafficking victims are carried abroad.

“These young women are used in prostitution, and from here they are sent to other countries like Spain, Italy and Portugal,” Eloisa de Sousa Arruda, São Paulo state secretary for justice and defence of citizens, told IPS.

De Sousa Arruda says that fuelling sex trafficking from this country is “the image of Brazilian women as sexy, which sells abroad.”

Recruiters can be found everywhere, even in small towns in the interior. The route generally ends in brothels abroad. The sex trade gangs include Brazilians and foreigners.

They sniff out a potential victim’s vulnerability and approach her “with job offers that are much better than what they can find in the town, neighbourhood or city where they live,” de Sousa Arruda said.

Menicucci said “They offer them jobs as waitresses or in clubs. They tell the women they will pay for their plane ticket and say the first few pay checks will go towards paying off the debt but after that they will receive their full wages.”

But the victims soon find out it was a trap. When they reach their destination, they find that the debt has multiplied, along with the difficulty in paying it off, and the victims become hostages “subjected to degrading conditions of sexual exploitation.”

The victims are kept under constant vigil and are often held in “private prisons.”

“Even if they get a chance to report their situation, they don’t do so, for fear of the threats against their own lives or those of their families,” the minister said.

De Sousa Arruda, whose office is in charge of the National Plan to Counter Trafficking in Persons unit in São Paulo, created in 2009, said the young women who fall victim to the networks “lack orientation.”

For that reason, she said, it is essential to raise awareness on sex trafficking, in order to support the authorities’ efforts against it.

In February, the government established a second National Plan to Counter Trafficking in Persons, which set a 2014 target for opening 10 more units to provide attention to victims, on top of the 13 that are already operating within and outside Brazil.

And more than 400 additional agents will be trained in the fight against trafficking, and international legal cooperation will be strengthened with the help of the UNODC. A total of 716 people from different disciplines received training between 2011 and 2012.

An international hotline was also established in Spain, Italy and Portugal, to receive complaints from victims in those countries. A similar number – 180, the Women’s Assistance Hotline (Central de Atendimento à Mulher) – began to operate in Brazil in 2005.

Meanwhile, a Globo television network soap opera or novela, “Salve Jorge”, the last episodes of which are being aired this month, has helped draw attention to the problem of sex trafficking.

Based on a real case, the programme is about a Brazilian woman forced into prostitution in a nightclub in Turkey. The screenwriter is Gloria Perez, who has focused on social issues like the disappearance of children in her earlier work.

“A novela with such a large audience, broadcast during prime time (21:00) and re-broadcast abroad, is important for helping people understand an issue like this. It helps by saying: ‘be careful’, you or your daughter could become a target of a trafficker. Don’t fall for promises of easy money,” de Sousa Arruda said.

The novela reflects the plight of sex trafficking victims, showing, for example, the young women’s fear of turning to the authorities because they are undocumented immigrants. “It also shows details such as the difficulty of communicating in another language, which is a serious impediment,” the official said.

Salve Jorge actually contributed to saving a young woman from the state of Bahia, who had gone missing in Spain. Watching the novela, her mother realised that her daughter had fallen victim to a sex trade network. The police in both countries worked together to track down, rescue and bring the young woman back to Brazil.

The Federal Police distribute pamphlets in places like airports, to warn people of the risks of accepting job offers in other countries, and provide information on where to turn for help. This has also helped prompt people to take action.

“The most important thing is to tell society that these crimes are much closer to us than we imagine, not just something you see on TV,” said Congressman Arnaldo Jordy, the president of the parliamentary inquiry commission on trafficking in persons.